Apple Closes MobileMe For Good, Data To Be Available For A Limited Time

Let's be honest. MobileMe was a disaster. Back in the day when it was launched, it never quite lived up to the extent it was advertised. Users were generally unhappy with it. We know it is not in Apple's nature to drag on with a product or service that is not performing well. Today on the 1st of July 2012 Apple has formally shut down MobileMe. The company says that data will be available for a limited time. How limited that time is, has not been mentioned. 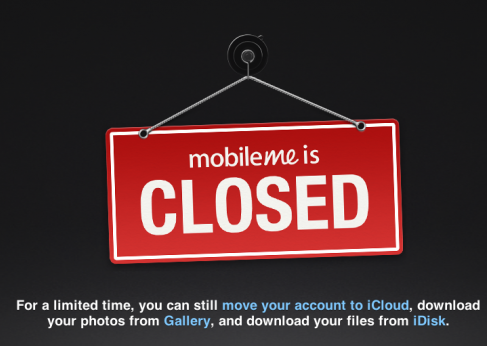 MobileMe has reached it's inevitable end. It is revealed in Steve Jobs' biography that the deceased Apple CEO was himself quite disappointed with this service. Walt Mossberg of All Things Digital had written a negative review about MobileMe, because it just wasn't up to par. Steve is said to have been quite angry at the MobileMe team. Nevertheless the company bounced back with iCloud. It's latest suite of cloud based services which does not repeat the mistakes of MobileMe.

After iCloud was announced last year, Apple said that it would close MobileMe for good in July 2012. Sure enough, the company has kept it's promise. Last month Apple sent reminders to MobileMe users about this impending closure and directed them to migrate to iCloud. As of now, a closed sign hands on Me.com, the domain for MobileMe. Data will be kept for a limited time, so if you used MobileMe in the past, it's best to migrate the entire data over to iCloud before it gets lost in oblivion.

iCloud seems to be working quite well. The reviews have been good and the users have been satisfied with it. Apple is continuing to make it better. Last month at WWDC 2012 Apple announced that Notes and Reminders syncing with iCloud is going to drop later this year. iCloud is also going to be integrated heavily in the next iteration of Mac OS.