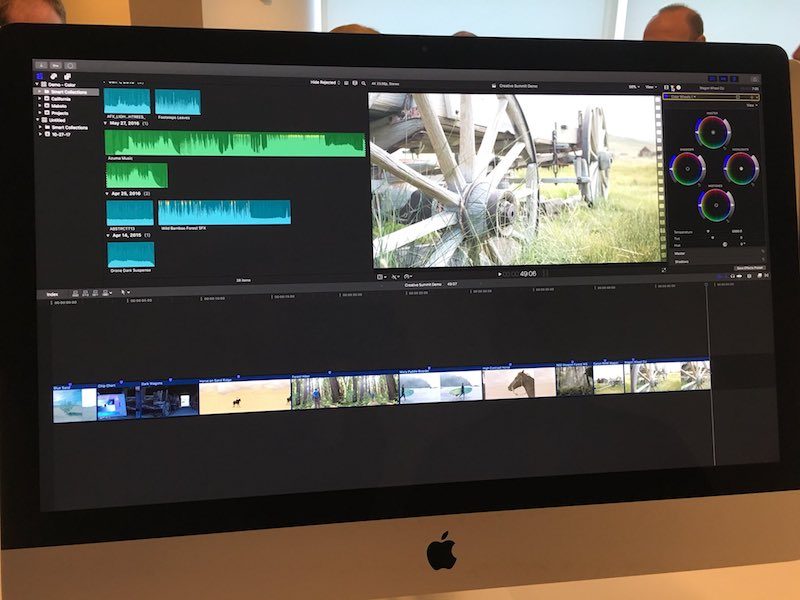 The first day of the event was quite huge as the company unveiled the next big update to its powerful editing software. While the Final Cut Pro X will be launched sometime later this year, there were no final dates designated. However, what we know about the release date is that it will arrive before this year's end. So how will be the Final Cut Pro X 10.4 be different from what we use to date?

The update will include a bevy of new additions as well as an update to the existing features. It will add new color tools such as a color and white balance picker. In addition to this, there are new controls added to the color board as well.

#FCPX 10.4 has been announced and will be available this year! pic.twitter.com/L5PObr0rnP

As we all know iOS 11.1 and macOS High Sierra 10.13.1 will include the new HEVC and HEIF support for photos and videos, the new version of Final Cut Pro X 10.4 will feature support for the new formats. The new formats basically aim at reducing space while retaining the same quality.

Open an #4K HEVC timeline shot on an iPhone 8 and edited in iOS will open in next version of Final Cut Pro X. Today at Apple #fcpx pic.twitter.com/LLXBoVxelN

Above all, the Final Cut Pro X will feature support for VR and HDR workflows. Other features include 360 titles and transitions, color wheels, custom LUT loading, direct import if iOS Movie timelines and much more.

#vr video in the next version of Final Cut Pro X #fcpx at Apple today pic.twitter.com/mTeXee1CXm

Apple also shared several demos of the new version of Final Cut Pro X which in action also included the 8K timeline on the new iMac Pro. Apple's Final Cut Pro is one of the most advanced and most powerful editing tools available on the market. It not only features an easy to use design, it's powerful in its own right, allowing editors to perform more in a lot less time. We will let you guys know as soon as we hear more details on the subject. At this point, Final Cut Pro X is available on the Mac App Store for $299.99.

Apple haven't said when the new version of Final Cut Pro X will be released. They showed it using an #8K timeline running on an iMac Pro https://t.co/3GWjAKAZr7

This is it for now, folks. What are your thoughts on the upcoming Final Cut Pro X 10.4? Are you a Final Cut Pro user? How does it seem different to you compared to other editing tools on the market? Share your views in the comments.