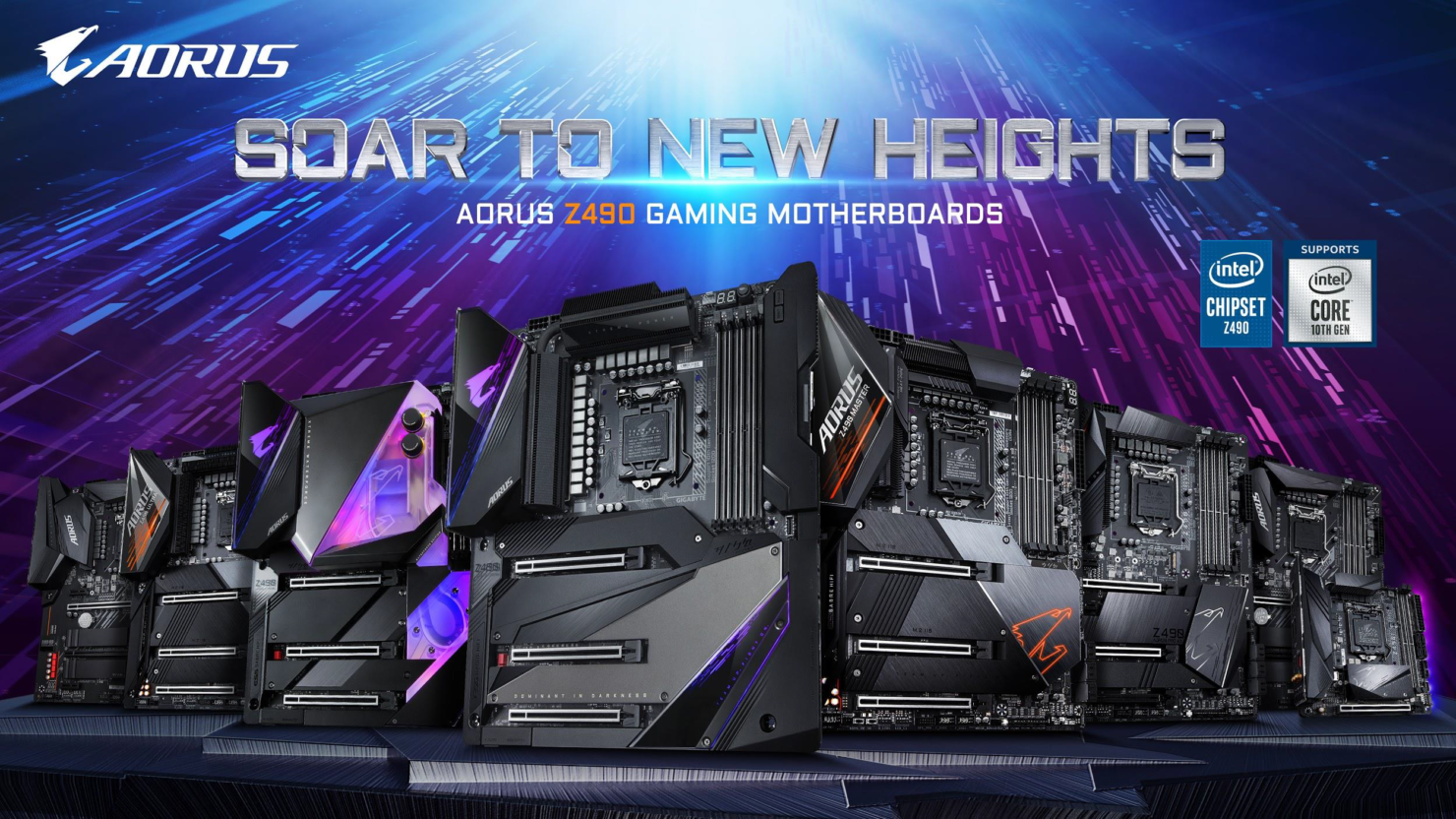 Before that, AORUS states that its Z490 series is better than ever compared to previous-gen Z390 lineup, offering up to 33% larger heat pipes for better cooling, 10% faster DDR4 speed and updated power delivery resulting in 22% lower voltage spike across various AORUS motherboards.

Starting off with the flagship Z490 AORUS Xtreme, this motherboard is insane in all ways possible. It is a force to be reckoned with and AORUS is showing off all that they can offer in terms of features and performance with this specific product. Like all AORUS Z490 motherboards, the Xtreme variant comes with a futuristic AORUS design scheme which makes use of large heatsinks and PCB covers to deliver a design that looks consistent throughout the lineup. The grey and black color schemes plus the RGB LEDs on this motherboard look fantastic.

The Z490 AORUS Xtreme features an insane 16+2 phase power delivery system with 90A Smart Power stages for each vCore phase for a total of 1440 Amps! A Digital PWM controller is fitted on the board which operates 8 doublers that in return operate the 16 power stages on the board. The whole power delivery is run by dual 8-pin connectors that feature solid metal shielding. There are only three models in the AORUS Z490 lineup which feature 90A Power Stages and those include the Z490 AORUS Xtreme, the Z490 AORUS Master, and Z490I AORUS Ultra.

Next up, we have to talk about how all of this impressive power delivery is cooled off. The answer is AORUS's Thermal Reactive Armor which makes use of a combination of features to reduce overall temperatures by up to 32C. The main features of the armor include the Fins Array II heatsink, the Direct Touch Heatpipe II, and finally, the NanoCarbon Coating & Armor.

The topmost VRM heat-sink block features the Fins-Array II design with NanoCarbon coating. AORUS is once again using a high-end fins based heatsink with a Direct-Touch Heatpipe II which offers 33% more surface area to make its contact with the VRMs. Between the heatsinks is a LAIRD 7.5 W/MK Thermal pad which provides significant heat transfer to the heatsink from the VRMs. An aluminum-based I/O cover hides the massive heatsink next to the rear panel. All Fins Array II heat sinks have been designed to feature a louvered design that lets air pass through more efficiently through them. The huge E-ATX motherboard comes with a huge NanoCarbon based baseplate that offers 3X Thermal conductivity, lowering the temperatures by up to 10% and comes with a nice matte black finish. 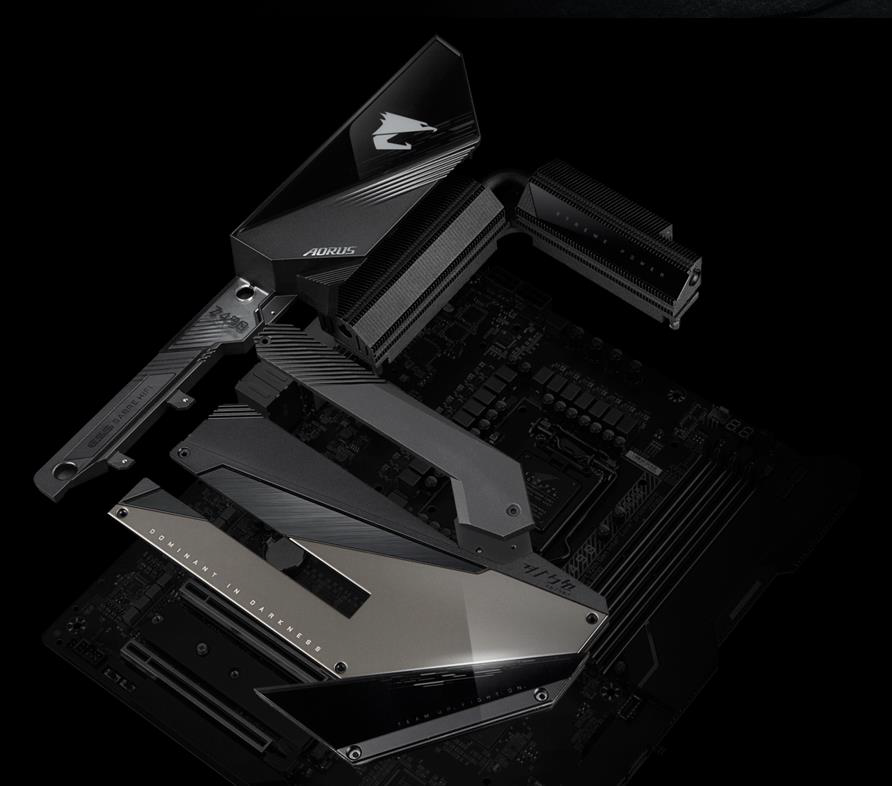 It also features four metal shielded DDR4 DIMM slots that support up to 4800 MHz memory speeds and up to 128 GB capacities. The main highlight of the DDR4 slots is that AORUS has featured a brand new Shielded Memory Routing design which reduces external interface by routing the DDR4 memory underneath the PCB. Storage options on the motherboard include 6 SATA 3 ports. On the expansion side, we are looking at three PCIe 3.0 x16 and triple M.2 slots, all of which feature the Thermal Guar II heatsinks that are part of the aluminum PCB cover. AORUS's Z490 motherboards are also PCIe Gen 4 ready and the Xtreme itself features two PCIe 3.0 x16 and a single M.2 slot that supports the Gen 4 protocol which would be put to use with the next-generation Intel Rocket Lake CPUs.

I/O on the motherboard include a range two Thunderbolt 3 Type-C ports, six USB 3.2 Gen 2 x2 / two USB 3.2 Gen 1 & two USB 2.0 ports, an Aquantia 10GbE LAN port, an Intel I225-V 2.5GbE LAN port, WiFI 6 / BT 5.1 with 2x AORUS Antennas, a 7.1 Channel HD Audio jack that features ESS SABRE HI-FI audio with USB DAC and powered by the Realtek ALC1220 VB2 codec, a Q-Flash PLUS, and a Clear CMOS button. Other than that, the motherboard features almost 90% right-angled connectors. The overall design aesthetics with RGB Fusion LEDs embedded inside the rear panel I/O cover and the PCH heatsink look absolutely amazing. You can expect this flagship motherboard to be priced around the $499-$699 US range.

The Z490 AORUS Master comes in an  ATX form factor and features a similar Fins Array II design with aluminum fins, direct touch heatpipe II, and Nanocarbon baseplate/coating for the 14 Phase Digital VRM that is rated at 90A. The CPU is provided power through dual 8-pin connectors. Storage options include 6 SATA III ports. The motherboard features support for DDR4-4800 MHz with up to 128 GB capacities.

Expansion slots on the Z490 AORUS Master include three PCIe 3.0 16 and triple M.2 slots. All three M.2 slots are covered by the M.2 Thermal Guard II heatsinks. Just like the Xtreme, the Master also comes with PCIe Gen 4 ready slots.

I/O on the motherboard include a range two Thunderbolt 3 Type-C ports, four USB 3.2 Gen 2 x2 / 2 USB 3.2 Gen 1 ports & 4 USB 2.0 ports, an Intel I225-V 2.5GbE LAN port, WiFI 6 / BT 5.1 with 2x AORUS Antennas, a 7.1 Channel HD Audio jack that features ESS SABRE HI-FI audio with USB DAC and powered by the Realtek ALC1220 VB2 codec, a Q-Flash PLUS, and a Clear CMOS button. The motherboard features a very stylish design with its fin stacked heatsinks, a mirror finish rear panel I/O cover, and a brushed aluminum PCB cover. Both the Z490 AORUS Xtreme and Z490 AORUS Master have a nicely designed backplate made of NanoCarbon which looks absolutely stunning on the back. Expect the board to cost around $299-$329 US at launch.

The Z490 AORUS Ultra comes in two flavors, a standard variant with the orange and black color scheme and a second variant known as the G2 Edition which is designed as a special model with the same specifications but a different color palette of red and black. The Z490 AORUS Ultra packs a design close to the AORUS Master and comes with a Direct 12 Phase Digital VRM with 50A power stages. The motherboard supports four DDR4 DIMM slots with up to 4800 MHz speeds and 128 GB capacities. Storage options include six SATA III ports.

The motherboard comes with 3 PCIe 3.0 x16 and triple M.2 slots with metal shielding and Thermal Guard II heatsinks. The Ultra variant also comes with PCIe Gen 4 ready slots and has a large cover on the lower half of the PCB. I/O on the motherboard is slightly different on both variants but both do come with pre-fitted backplates.

The Ultra features four USB 3.2 Gen 2 (3 Type-A + 1 Type-C), 2 USB 3.2 Gen 1, four USB 2.0 ports, WiFi 6 support with 2 AORUS Antenna slots, a 2.5G (Intel I225-V) Ethernet LAN port, a 7.1 channel HD audio jack with SPDIF out and Clear CMOS / Q-Flash Plus buttons. The G2 doesn't feature gold plated audio ports and doesn't include the Clear CMOS or the Q-Flash Plus buttons found on the standard variant. Both motherboards should be dropping in at a price close to $249 US.

The Z490 AORUS PRO AX comes with a more mainstream tuned design with its 12 Phase Direct VRM (50A Power Stages) that is powered by an 8+4 pin connector configuration. The board does come with Fin Array II heatsinks but only on one side next to the I/O panel. The top VRM heatsink features a standard stacked aluminum design. Both heatsinks are interconnected via a single heat pipe. The board is rated to support DDR4-4800 MHz memory speeds with up to 128 GB capacities. Storage options include 6 SATA III ports.

Expansion slots on the motherboard include three PCIe 3.0 x16, two PCIe 3.0 x1, and triple M.2 slots. Two of the M.2 slots feature Thermal Guard II heatsinks over them. The motherboard is also PCIe Gen 4 compliant. The PCH is cooled by an aluminum heatsink with the AORUS logo on it. The same goes for the I/O cover plate which features RGB Fusion LEDs and has the AORUS branding laser-etched over it.

Just like the AORUS Ultra, the Z490 AORUS Elite also features two variants, one with WiFi 6 and the other without WiFi 6 support. The rest of the specifications between both motherboards are nearly identical. The board features 12 Digital Power Phases (50A) which are powered by an 8+4 pin config and four DDR4 DIMM slots that can house up to 128 GB memory capacities with speeds of up to 4666 MHz (OC+). Storage options on both boards include six SATA III ports. Unlike their more high-end brethren, the Z490 AORUS Elite boards stick to a standard aluminum heatsink design with no heat pipe cooling involved.

We will now cover the only ITX variant in AORUS's Z490 lineup, the Z490I AORUS Ultra. This board comes with an ITX design and features an 8 phase Direct Digital VRM design with 90A power stages. The motherboard features a 10 layer PCB and has stacked aluminum heatsinks that cover the VRM and direct heat through a single heat pipe. The motherboard supports two DDR4 DIMMs with up to 64 GB capacities and speeds of 4800 MHz. Storage options include four SATA III ports. Power to the CPU is supplied through a single 8-pin connector.

Expansion slots include a single PCIe 3.0 x16 and two PCIe 3.0 x4 M.2 slots with Thermal Guard heatsinks. The design itself is quite interesting on this board with a large central aluminum heatsink block that covers the PCH.

And finally, we have the most expensive and the most high-end variant of the AORUS Z490 family, the Z490 AORUS Xtreme Waterforce. This variant has the literal same specifications as the Xtreme variant with the only difference being the large water block that covers everything from the CPU, the VRMs, and the PCH. The AORUS All-In-One monoblock was first seen on the Z390 Waterforce but has now been updated to support and offer even better cooling performance on Intel's 10th Gen CPU lineup. 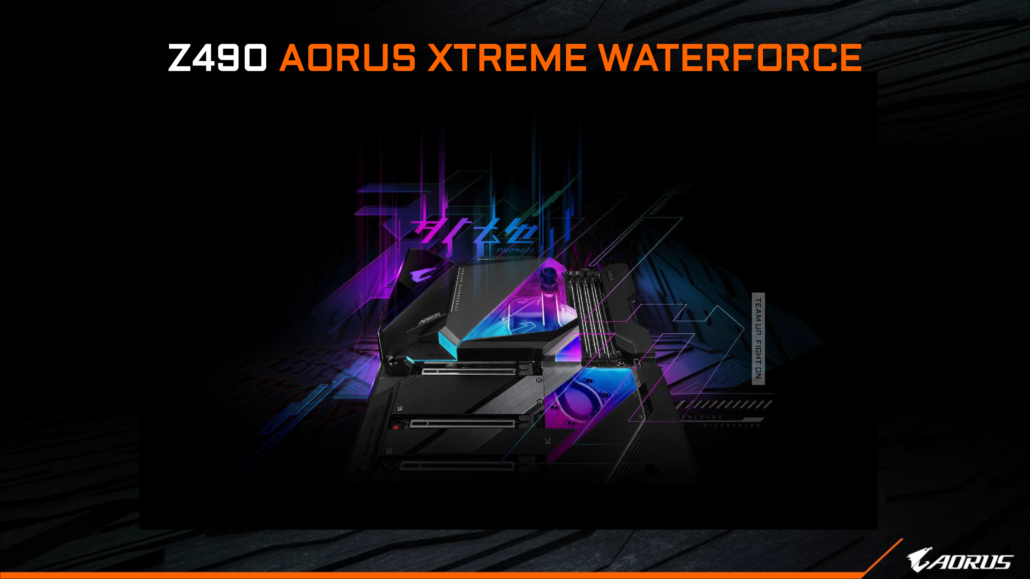 While the features remain the same, the added monoblock would result in a much higher price than the standard Xtreme variant. This is a board designed exclusively for enthusiasts who plan to use custom-loop water cooling and as such, they should be paying the top price of over $800 US for the board alone.