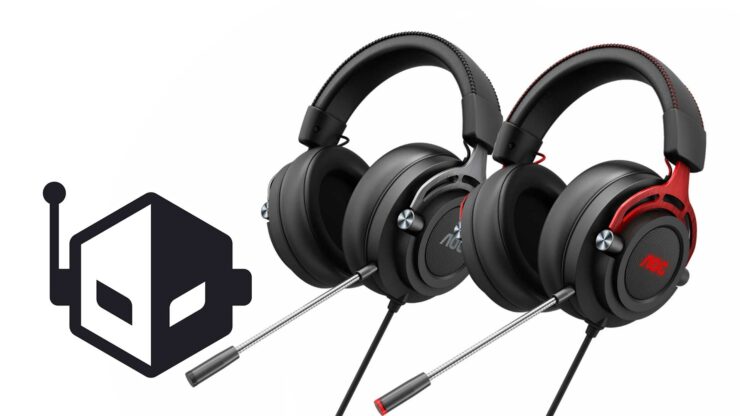 AOC has announced two new gaming headsets, and these headsets are called the GH200 and the GH300. Both headsets use the over-ear design and offer similar features, the GH300 headset offering RGB lighting and a red and black color scheme instead of just a solid black color scheme. Both of these headsets are expected to be available in May 2021 with a price of £39 and £49 for the GH200 and the GH300, respectively.

AOC has announced two new headsets, the GH200 and the GH300, using either a 3.5mm connection or a USB connection

The GH200 headset uses a 2m braided cable with a  3.5 mm jack and even included a Y-splitter; this included splitter allows users to easily and efficiently split the microphone and headphone outputs if needed. This universal 3.5 mm connection makes this headset perfect for various devices, including phones, consoles, and computers.

This headset features no RGB lighting and instead has the AOC brand name painted on each ear cup and features a black and grey color scheme. This allows it to match with nearly any console or gaming setup. This headset offers support for Windows Sonic Spatial sound for PC and Xbox allowing for fantastic audio quality through a single 3.5mm connection.

The GH300 headset swaps out the 3.5 mm jack for a USB port, allowing for virtual 7.1 surround sound capabilities and RGB lighting with four different lighting modes. The virtual 7.1 surround sound allows gamers to pinpoint their enemies without needing to see the enemy. This headset also features an LED on the detachable microphone, which shows when the microphone is muted.

This headset's RGB lighting is on each earcup and features four different lighting modes: Breathing, Cyclic, Static, and off. The RGB lighting is controlled through the in-line remote that also houses volume and microphone on/off switches, which allows for easy controls without needing to leave the game.

Both headsets are stated to be available in May 2021, with the GH200 headset featuring a price of £39 and the GH300 having a price of £49. This low price ensures that budget gamers can get a high-quality headset without spending a large amount of money.