Merry Christmas folks! Its pretty much a shame that no one sent this greeting out while indulging in the festivities of the season at Wccftech. And leaving Christmas aside, there is some great news for the HTC One S users since official Android 4.1.1 Jellybean with Sense 4+ topping is rolling out as we speak. The update began going OTA at Christmas eve when many of us were being merry and don’t know if HTC One S users had the time to notice the update notification. This must have been a Christmas Santa-Kindda move from HTC, but we aren’t hearing many HTC One S users who had the time to get their phone updated right in the ripe Xmas eve hours.

The update isn’t a meager deal at all. Since it comes with a myriad of features, changes, bug-fixes and whatnot; the Android 4.1.1 Jellybean update weighs a whooping 612 MB! So if you just received the notification and don’t have access to a free unlimited high-speed data plan, then a word from the wise is to download and install this update by connecting your HTC One S over a high-speed and stable Wi-Fi connection. 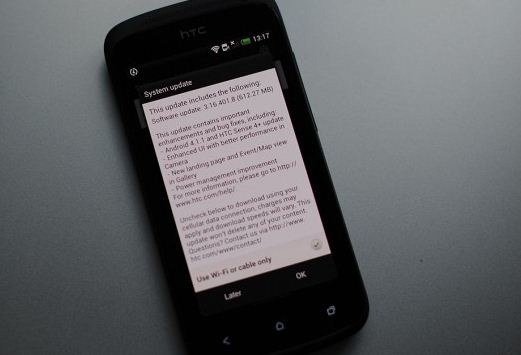 What’s inside the update? Well, the whole new Android 4.1.1 Jellybean with Sense 4+ ( Don’t know how many of you still like having HTC Sense on your phones) is the main deal. Apart from this, there are some usual user interface enhancement, a camera tweak to let your snap better pictures and a some sort of a power management improvement.

We don’t really know if you should download and install this update on your HTC One S on a rooted device with a custom recovery. And we won’t advise on going for it since back in the day, devices with root usually used to go bonkers when official firmware updates were tried on them. For those with root, we’d suggest waiting for a custom ROM that brings all the inclusions, minus those which you don’t want, in this update.

In case you haven’t received the notification for update until now, then hang in there since over the air roll out is done in steps and your country might receive it sometime later.