It is safe to say that the Android operating system has become a lot more popular than it used to be. Easily enjoying a higher market share than iOS at the point, but to be honest, it is the Android 11 that is considered a bigger victor here, because according to the latest data from StatCounter, Android 11 now brings the fastest adoption rate out of any Android version to date, in the US, at least.

This month, Android 11 is holding over 25% of the mobile and tablet Android version market. What is even more impressive is that it has only been six months since Android 11 first came out, and Android 10 remains the most widely available Android version in the US with a 33% market share. You can look at the chart for the US market below. 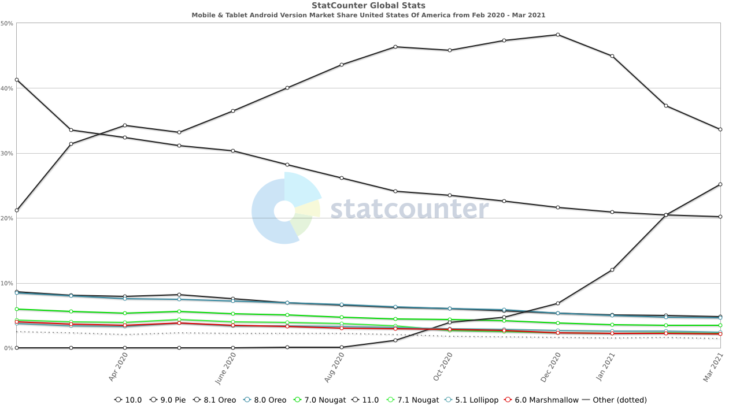 Speaking globally, Android 10 remains to be the champion, holding 41% market share and is the most popular version of Android across Europe and Asia. These two regions are also the ones where Android 11 is still trying to catch up.

At this point, it is safe to say that Google, along with the partners, is doing a lot better job keeping the Android fragmentation at the lowest possible. In July last year, Google talked about how Android 10 is seeing the fastest adoption, and now we are getting word on how Android 11 is on the same track.

However, you must know here that although the stats that StatCounter provides are correct, they are not official. This means that we will have to wait and see the numbers that Google will release in the coming days or months.

Google is currently busy working on Android 12; with the Developer Preview already available on Pixel devices, we will surely see a lot of Android 12 heading forward.