SemiAccurate had leaked photos of AMD’s Trinity APU core with only a picture yet no details or whatsoever on the die. However an online PC enthusiast has stepped forward and given out some details of what’s on the chip. 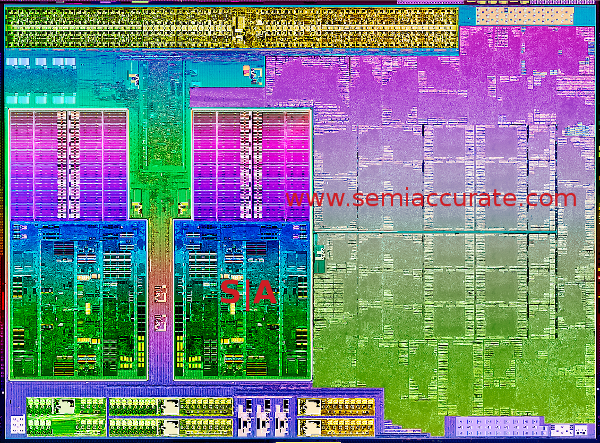 According to Charlie Demerjian, the Trinity APU incorporates two Piledriver modules that are an enhanced variant of the Bulldozer architecture.

The 4 cores seem to be smaller than its predecessor with a DDR3 memory controller placed on top along with a UVD decoder module. On the other hand, the bottom consists of the Display controller and the Northbridge PCI-E controller. At this point, the overall design looks pretty similar to the Llano APUs.

Also, the Trinity APU is said to support DDR3 frequencies of 2133 MHz. There is also a possibility of these APUs to come with native PCI-E 3.0 support.

The most critical part of the GPU graphics core has also been detailed and said to have six ‘VLIW4 flow processors’ in an array architecture that accumulates to a total of 384 stream processors. In comparison with the VLIW5 architecture present in the Llano 400 APUs, this structure seems yet more efficient and achieves overall 30% improvement in performance.