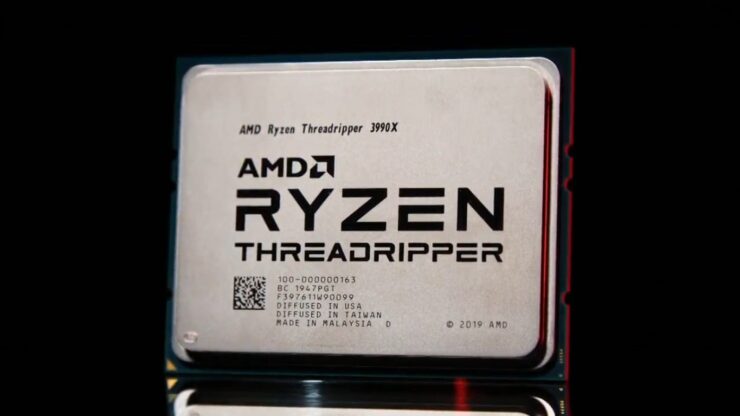 AMD's largest Ryzen CPU for the HEDT market, the Threadripper 3990X just got a price cut of $540. This makes it the cheapest it has ever been according to CamelCamelCamel. It also means you can buy the 64 core/128 thread processor for just under $54 per core. This is still pretty pricey for an AMD part but considering the lack of competition in this bracket, the price is pretty fair.

The processor features 288 MB of total cache, tons of PCIe Gen 4 lanes (~128) and a TDP of 280W. The TDP is surprisingly low for a 64 core part. The Ryzen Threadripper 3990X features a base clock of 2.90 GHz and a single-core boost clock of 4.3 GHz. The processor also packs 8 Zen 2 CCDs since the chip has64 cores. The other two Ryzen Threadripper CPUs, the 3970X and the 3960X, feature only four CCDs since they only need to scale up to 32 cores. The processor originally launched for a price of $3990 US.

The CPU also marked the first departure of AMD from its usual pricing strategy of making cheap and affordable CPUs. Most of their Zen 2 based lineup features a per-core price of $35, while the threadripper series is priced with a lot more gusto. It looks like AMD took a page out of Intel's book because at the pricing levels set previously, a 3990X would have clocked in at just $2240. That said, AMD is a business, and it exists to make money and there is nothing wrong with charging a premium for a product that has no competitor - rather like Intel did in the pre-Zen era.

As it stands right now, this deal is amazing for those who want to buy this processor. But [caution: speculation], I have a feeling that this is just the first of many price cuts that the threadripper series might see and you would do well to wait a few more months before jumping the gun (if you haven't already). If you can't wait, then the Ryzen 3990X represents a super sweet deal for those that want the raw performance of a 64-core with none of the weaknesses of AMD's older Zen1 based threadrippers.

As of right now, this is the best workstation oriented chip that money can buy, making it a perfect choice for enthusiasts. Along with that, the advantages of the TRX40 platform are high versus the competing Intel HEDT platform. AMD showcased some seriously impressive performance numbers for the 3990X with the chip scoring over 25000 points in Cinebench R20 (multi-threaded) bench and also outpacing dual Xeon Platinum 8280 (56 core / 112 thread) processors in V-Ray render by up to 30%.