This report comes directly from Fudzilla. A very accurate source of leaks in the past. However as they themselves state that this leak cannot be confirmed I'll have to tag this as rumor.

The report from Fudzilla is a bit light on details however they do state that AMD is planning to update the never settle game bundle. Sid Meier's Cvilization Beyond Earth is a great candidate for Never Settle. AMD has been working with the team on game optimization including Mantle support. So I wouldn't be surprised to see it added to the catalog . Fudzilla also claims that AMD has told its board partners to remain on "Stand by" for the  Tonga XT launch. A GPU widely speculated to be powering the infamous R9 285X graphics card. A product which remains elusive to this day.

Just a quick reminder to those who aren't in the know. The never settle campaign originally debuted in October of 2012 along with a new Catalyst 12.11 graphics driver. The driver promised 10-15% better performance across the board. A performance improvement which was achieved via a breakthrough in the memory management of AMD's relatively recent GCN architecture at the time. The campaign introduced the hottest titles of 2012 in a game bundle with AMD Readeon graphics cards.

The bundle included titles such as Far Cry 3, Hitman Absolution and Sleeping Dogs. In early 2013 the bundle was updated to include a new wave of the hottest games such as Tomb Raider, Bioshock Infinite and Crysis 3. 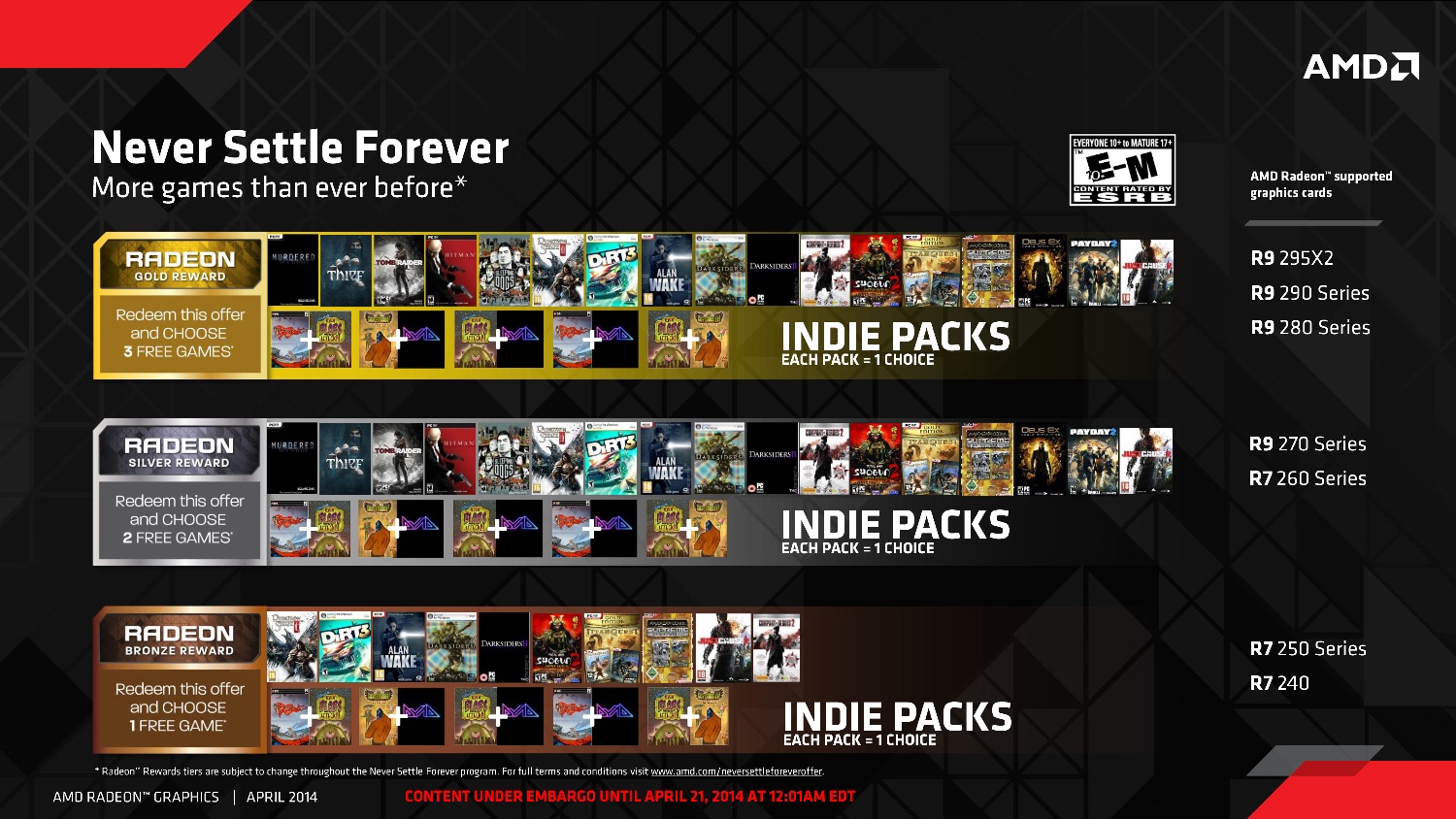 However in mid 2013 AMD wanted to take the campaign even further and Never Settle was updated to Never Settle Forever. A new system was introduced which allowed users to choose between a catalog of games instead of just receiving the same three titles. Admittedly the three titles were great but adding choice improved the experience even further especially for users who had already owned some of the titles in the bundle, or for gamers who were looking to buy multiple cards for a CrossfireX setup.

Ever since the introduction of Never Settle Forever in Agusut 2013 AMD has gradually been adding more games to the collection often as soon as they're released. And as the holiday season approaches expect a few new surprises on the never settle campaign.