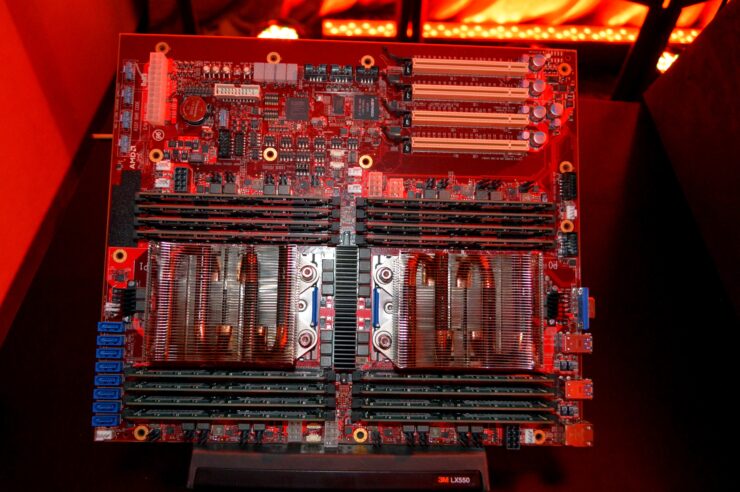 Benchmarks for AMD's Zen based Naples SOC have been leaked on the web. AMD Naples is the codename for the upcoming server platform that would utilize the latest Zen based processors to power high-performance computing. AMD revealed that they have been able to achieve performance parity with Intel with their new Zen core. Let's take a closer look at the benchmarks of the Naples 32 core chips.

The entry for the benchmark was made two days ago on Geekbench database. The specific codename for this platform is 2S1451A4VIHE4_29/14_N. This is a dual socket platform that utilizes two processors. Each chip has 32 cores which make up a total of 64 cores on the Naples platform. The chips are clocked at 1.44 GHz base and 2.9 GHz boost clocks as identified OPN. The Naples platform is still months away from launch so we are looking at engineering samples over here. 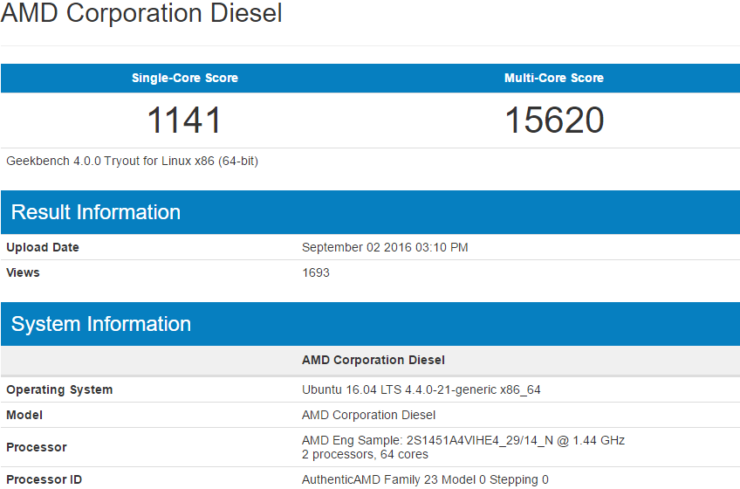 During the recent run down on the architectural details for Zen, we noticed that the core comprises of a CPU complex. Each CPU complex features four cores that are connected to 8 MB of L3 cache. From the looks of it, Zen based server chips with 32 cores can feature up to 64 MB of L3 cache which is quite disruptive. This along with 64 threads available for hyper-threaded workloads would make for a very competitive product in server platforms. For full details on Zen Micro-architecture, you can check out a detailed article here.

The motherboard for Naples platform is codenamed "AMD Corporation Diesel". The platform is featuring 128 GB of DDR4 memory. In Geekbench 4, the platform scored 1141 Points in single-threaded and 15620 points in multi-threaded performance tests. We couldn't find a similar Intel Xeon platform for comparison at Geekbench due to clock differences. These benchmarks are not representative of final performance for Naples as it still has a long way to go before launch. AMD did confirm that Naples will be shipping in Q2, available just a few months after Summit Ridge for desktops.

AMD would first be rolling out Zen to the desktop gaming market but they plan to introduce it to the server market just a few months after the desktop launch. AMD also showcased their 32 core / 64 thread Naples platform which are aimed at the workstation 2P/2S (dual socket) market. AMD is also planning to bring Zen+ chips built on 7nm process with 48 cores later in the roadmap.

A 2 socket solution should mean a total of 64 cores and 128 threads along with denser memory capacities that make Opteron sound like a kid in the park. We would also see next generation HPC server chips which combine 32 high-performance cores alongside massive Vega GPUs that will be used to crunch FP64 calculations. That has been in the plans for quite some time and with Naples rolling out in Q2 2017, we might see it sometime around 2018. You can also see more info on Summit Ridge benchmarks here.