AMD has reportedly gained 2.2% CPU market share in the first quarter of 2017. This makes it the very first time the Sunnyvale, California based chip maker has made any meaningful share gains against its much larger rival Intel since Q1 2014. Which was the last quarter where the company saw any share gains that amounted to anything more than 1%.

The data is courtesy of PassMark's quarterly market share report, which is based on the thousands of submissions that go through the database in any given quarter.  It's important to note that because PassMark's market share data is based on benchmark submissions it counts actual systems in use, rather than systems sold. It also does not include consoles or any computer systems running operating systems other than Windows. 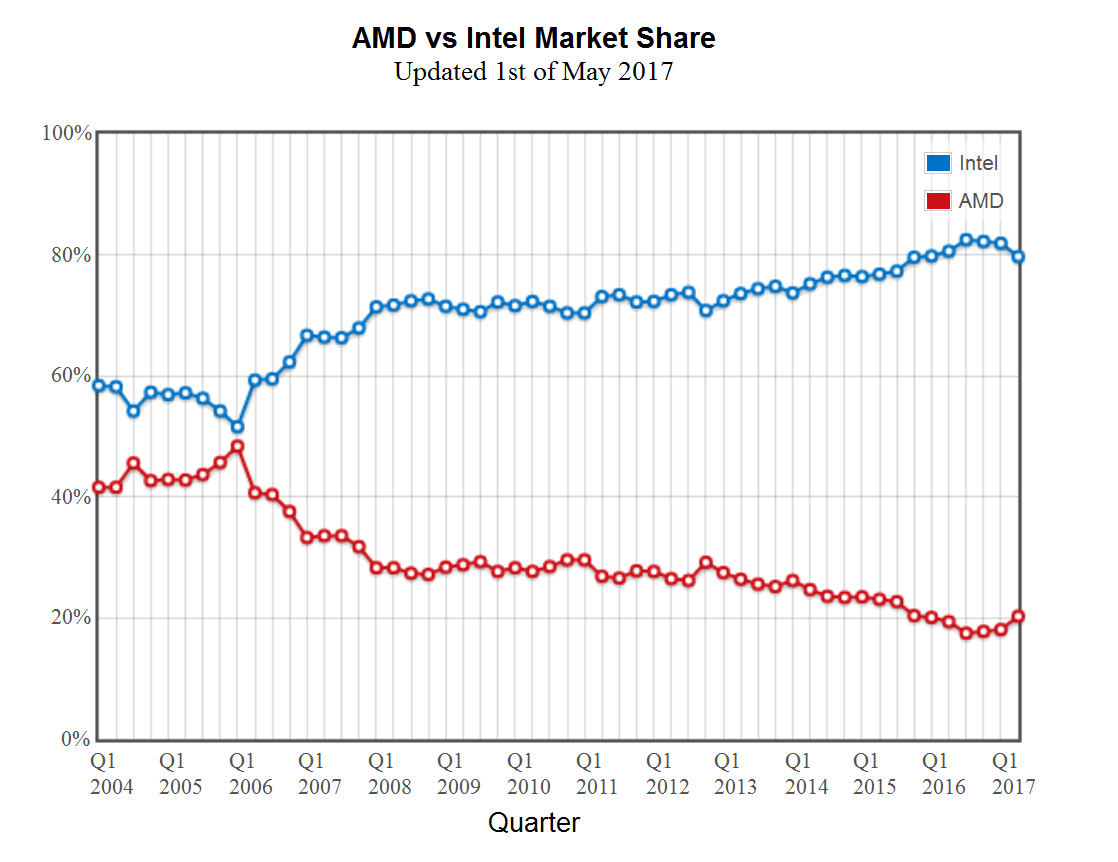 PassMark
- This graph counts the baselines submitted to us during these time period and therefore is representative of CPUs in use rather than CPUs purchased.
- The Quarters are by the calendar year rather than financial. (i.e. Q1 starts January 1st)
- Baselines can be submitted from anywhere therefore these are global statistics.
- We do receive a small number of submissions of CPU types other than AMD and Intel however the percentage is so small as to make it not worth graphing. This combined with rounding off the percentages to 2 decimal places will account for each quarter not always adding up to exactly 100%.
- This chart only includes x86 processors and does not include other chip architectures these manufacturers may sell.
- This chart only includes CPUs installed into PCs and does not include game consoles.
- As the PerformanceTest software only runs on Windows OS and counts on user submitting their benchmarks. This chart may be non reflective of non Windows user base.

While a 2% share gain does not seem like much it's actually quite significant for a number of reasons. Ryzen had only been on sale for one out of the three months in Q1. And only the more expensive top-end Ryzen 7 processors were available. Ryzen CPUs were going out of stock as soon as they were put on sale on all major e-tailers in North America, Germany and the UK in March. This means that AMD was likely selling every single Ryzen chip it was making.

The initial launch was also hamstrung by a shortage of AM4 motherboards. Today many AM4 motherboards are consistently in-stock and there are more than twice as many Ryzen processors to choose from, thanks to the Ryzen 5 launch last month. At the end of the second quarter, Ryzen processors will also have been on sale throughout the entirety of the quarter, with double the SKUs and the bulk of the AM4 motherboard shortage gone. As such Q2 market share data will reflect Ryzen's performance in the market with considerably more accuracy.

In the time period between the 1st of January 2017 and the 31st of March of the same year the AMD CPU installed base grew from 18.1%, excluding consoles, to 20.3%. This represents an accumulative growth of 12%.

Ryzen officially debuted in early March and the majority of share gains made by AMD in Q1 are attributable to the users that purchased and built PCs based on Ryzen during the last month of Q1. In April, the company followed up the Ryzen 7 release with the more popular, and affordable, Ryzen 5 processor lineup.

The last time AMD saw similar share gains was in Q4 of 2012, which amounted to 3%. At the time the company's newly introduced Piledriver FX CPU and APU lineups had been on the market in their entirety throughout the fourth quarter. By comparison only three Ryzen SKUs were available in Q1 of this year, only during March and only for desktops, which clearly underlines the great magnitude of the market's appetite for Ryzen processors.