AMD's G-Sync competitor, FreeSync is a fantastic thing for the consumer. It's an open standard based on currently available DisplayPort technologies and it's far cheaper to implement. AMD was able to show off the use of FreeSync over HDMI 1.4a, an industry first, making it potentially even more accessible. 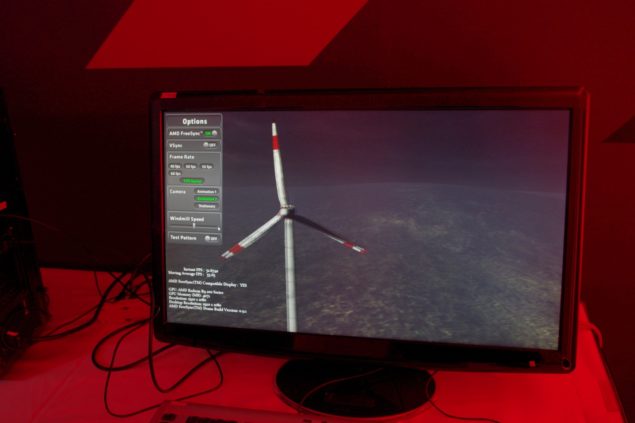 AMD has been able to implement FreeSync over the HDMI 1.4a spec, showing that with a little novel programming, FreeSync is adaptable to anything.

AMD was able to show off a monitor running their windmill FreeSync demo with a Realtek Timing Controller that was capable of receiving FreeSync data and providing variable refresh rates over an HDMI connection. HDMI doesn't have the necessary provisions to communicate this information, though, so AMD had to write that into the firmware so it could operate properly.

This is a very important development because it could mean the adoption of an open standard for HDMI as well. AMD, after-all, was the driving force behind VESA adding Adaptive Sync as an annex to the DisplayPort 1.2 standard. So it stands to reason that their proof of concept could help to influence the market once again to make variable refresh rate monitors a the rule instead of the exception.

The great thing is that because it took a simple (or not so simple) firmware rewrite, this could potentially mean that any monitor that's capable of supporting Adaptive Sync could potentially be flashed to enable support of that over HDMI. It's even better because it was done over the 1.4a specification, which has less bandwidth and is now much more common.

The implications of AMD's proof-of-concept are profound, actually. This means that even low-end monitors could end up with support for FreeSync, even at 60Hz, which still could prove to smooth out the visual experience. The fact that there is no active cost involved in implementing this over DisplayPort or HDMI means that it could be far more accessible to monitor manufacturers. Whether or not you like AMD is irrelevant in this case, because this technology is potentially useful for everyone. Now NVIDIA just needs to add support for this open standard.

Remember, this is just a proof-of-concept to show that it's workable. No monitors have been announced with HDMI FreeSync and there is no roadmap, just the the potential for a bright future.