During the GPU '14 conference, AMD showcased the graphical capabilities of their latest Hawaii GPU with new games and tech demos based on the famous GPU crushing CryEngine 3. Developed by Crytek, CryEngine 3 is one of the most powerful visual engine ever developed and has been since the debut of the original Crysis on PC.

AMD Ruby made a comeback after a long slumber, remastered with CryEngine 3. The AMD Ruby tech demo of 2013 provides a more cinematic feel to the visuals while making use of new features such as Mesh Tessellation and AMD’s TressFX technology. AMD’s TressFX made its debut with Square Enix’s “Tomb Raider” which launched early in 2013. The technology allows to render Lara’s hair in a more realistic manner with accurate physics. The TressFX makes use of AMD DirectCompute tech to run optimally.

AMD Ruby has been updated with a much more modern look and design scheme, the tech demo itself is set in a futuristic world. The new features imposed with CryEngine 3 in the Ruby tech demo include:

Innovations in Shading and Rendering 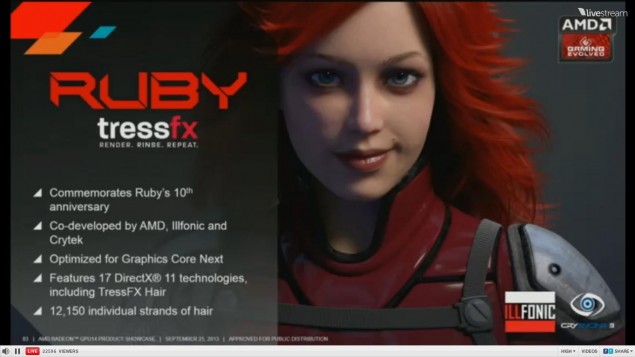 AMD and RSI partnered up to showcase their multi-million dollar funded Star Citizen at the GPU '14 event. The video hasn't gone live yet but you will be able to see it when the links are up at Youtube after the live event.

With the powerful new AMD True Sound and Astoundsound features, AMD showcased a live demo of CryEngine 3 powered Lichdom. Wait just a few minutes before the video of the showcase goes live and we will update it over here.