AMD Ryzen Pro Processor Family Launches For The Enterprise Market - Up To 8 Cores, 16 Threads With Best Security and Reliability Features

The AMD Ryzen Pro processors were first mentioned back in February '17 as a part of our exclusive story. The family consists of 8 processors which feature 8, 6 and 4 cores. Each CPU is segmented into three sections.

The top Ryzen Pro 7 series is built for "Power Users" and is aimed directly at Intel's Core i7 lineup, offering faster content creation, software development, architecture, multi-tasking, and Scientific / 3D applications optimized performance. The Ryzen Pro 5 series is targeted at mainstream users and competes against the Core i5 lineup with a focus on advanced productivity and remote collaboration tasks. Lastly, we have the Ryzen Pro 3 stack which is aimed at the basic task worker and competes against the Intel Core i3 lineup, offering great office productivity, email, net browsing and content consumption performance.

“Today marks another important step in our journey to bring innovation and excitement back to the PC industry: the launch of our Ryzen PRO desktop CPUs that will bring disruptive levels of performance to the premium commercial market,” said Jim Anderson, senior vice president and general manager, Computing and Graphics Group, AMD. “Offering a significant leap in generational performance, leadership multi-threaded performance, and the first-ever 8-core,16-thread CPU for commercial-grade PCs, Ryzen PRO provides a portfolio of technology choices that meet the evolving needs of businesses today and tomorrow.” via AMD 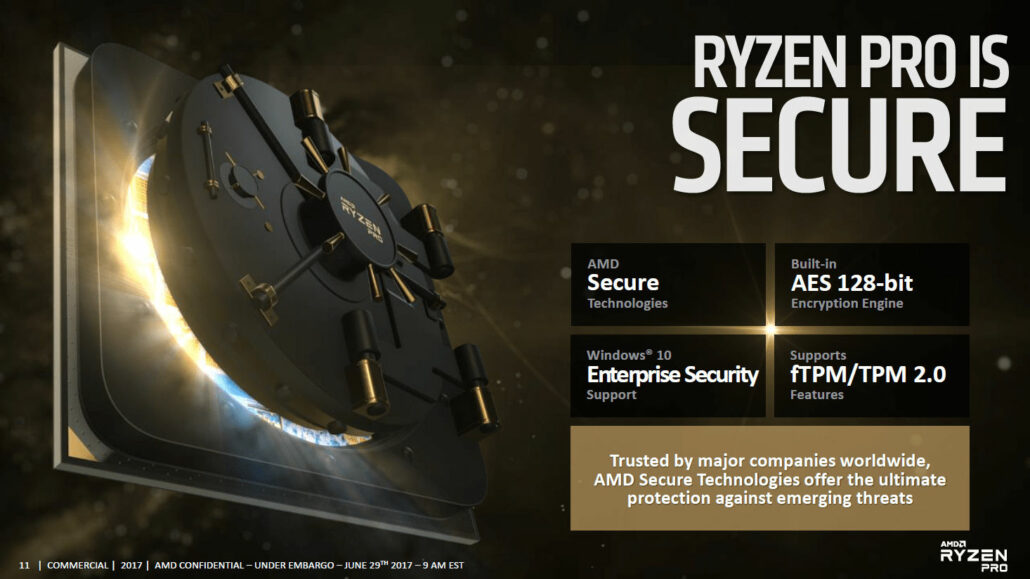 The top of the stack is the Ryzen 7 Pro 1700X which features 8 cores, 16 threads and a clock speed of up to 3.7 GHz. The chip features a 95W TDP and features 20 MB of L3 cache. All other chips in the stack feature a TDP of 65W and exist in 6 core / 12 thread, 4 core / 8 thread and 4 core / no HT variants. Specifications of these processors can be seen in the table provided below.

Delivering breakthrough responsiveness for the most demanding enterprise-class applications and multi-tasking workflows, the ‘Zen’ core in every Ryzen PRO processor provides up to 52 percent improvement in compute capability over the previous generation, and the Ryzen 7 PRO 1700 offers up to 62 percent more multi-threaded performance than select competing solutions. via AMD