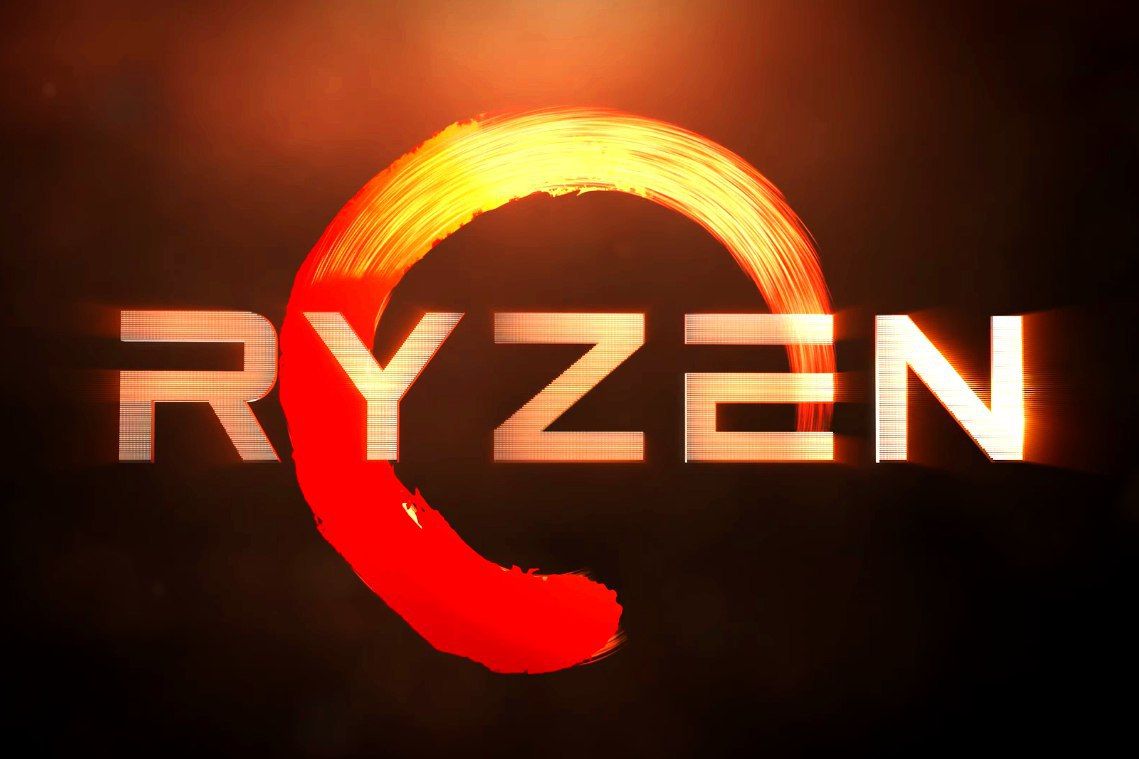 A user based in Chile has got his hands on AMD's upcoming Ryzen 2600 CPU and posted several performance benchmarks. The upcoming lineup which is expected to launch around the mid of this month will be featuring a range of 12nm process based CPUs and incorporate new features that will be only supported by new 400-series chipset based motherboards.

Update: The user who goes by the name of "Mow" on Discord has forwarded us even more benchmarks of the Ryzen 5 2600 CPU which can be seen below. This time, the chip was overclocked to 4.05 GHz along with 3466 MHz DDR4 memory which you can see in the tests below.

There's also a link provided to the Geekbench score of this processor which can be found here. 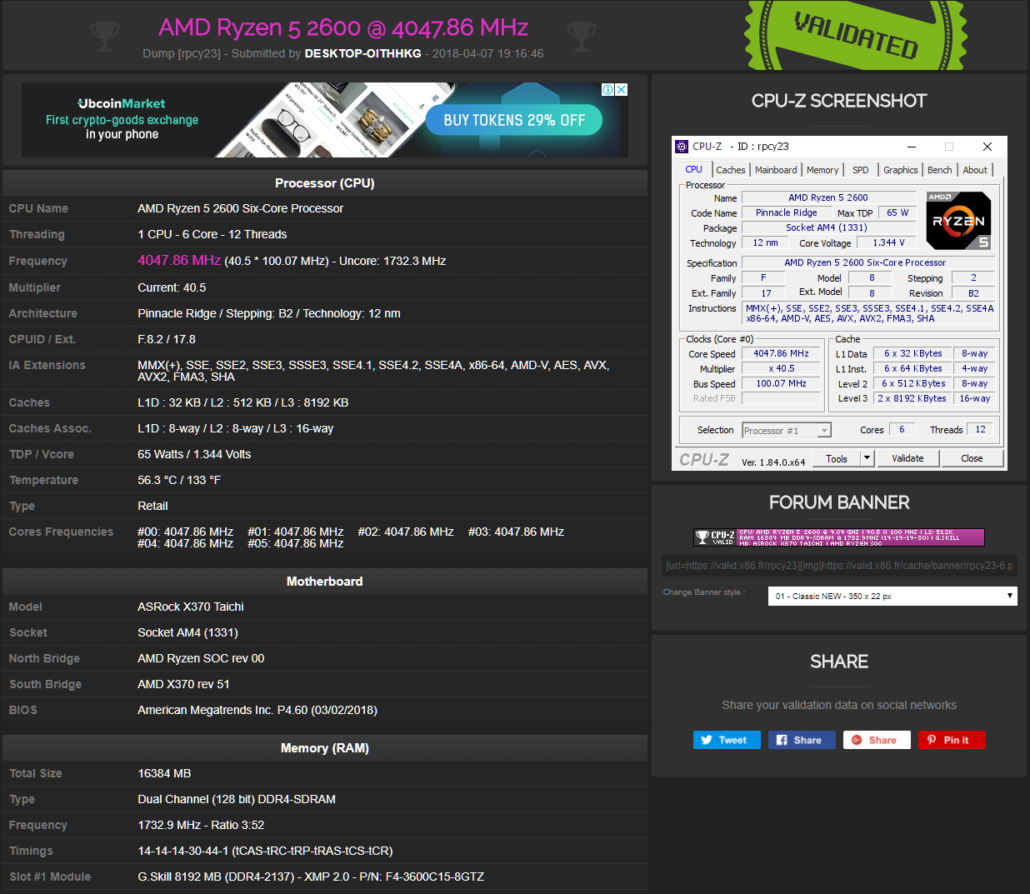 The AMD Ryzen 2600 CPU is a 6 core and 12 thread part and will cost just $199 US. The sweet spot pricing will make it quite an attractive CPU in the sub-$200 US range and it will compete against the Intel Core i5-8400 which is a $182 US processor featuring 6 cores (no multi-threading support). The chip features a base clock of 3.4 GHz and a maximum single core boost clock of 3.9 GHz. The chip is rated at a TDP of 65W and additionally features 19 MB of total available cache.

The Ryzen 5 2600 CPU was tested on an ASRock X370 Taichi motherboard with the P4.60 BIOS. The Taichi itself is a very capable motherboard but do note that most AMD Ryzen 2000 series features such as XFR 2.0 and Precision Boost 2.0 are not supported by older 300-series AMD motherboards. The chip showed up fine within the BIOS along with 16 GB of DDR4 memory which was running at native speeds of DDR4-2133 MHz. 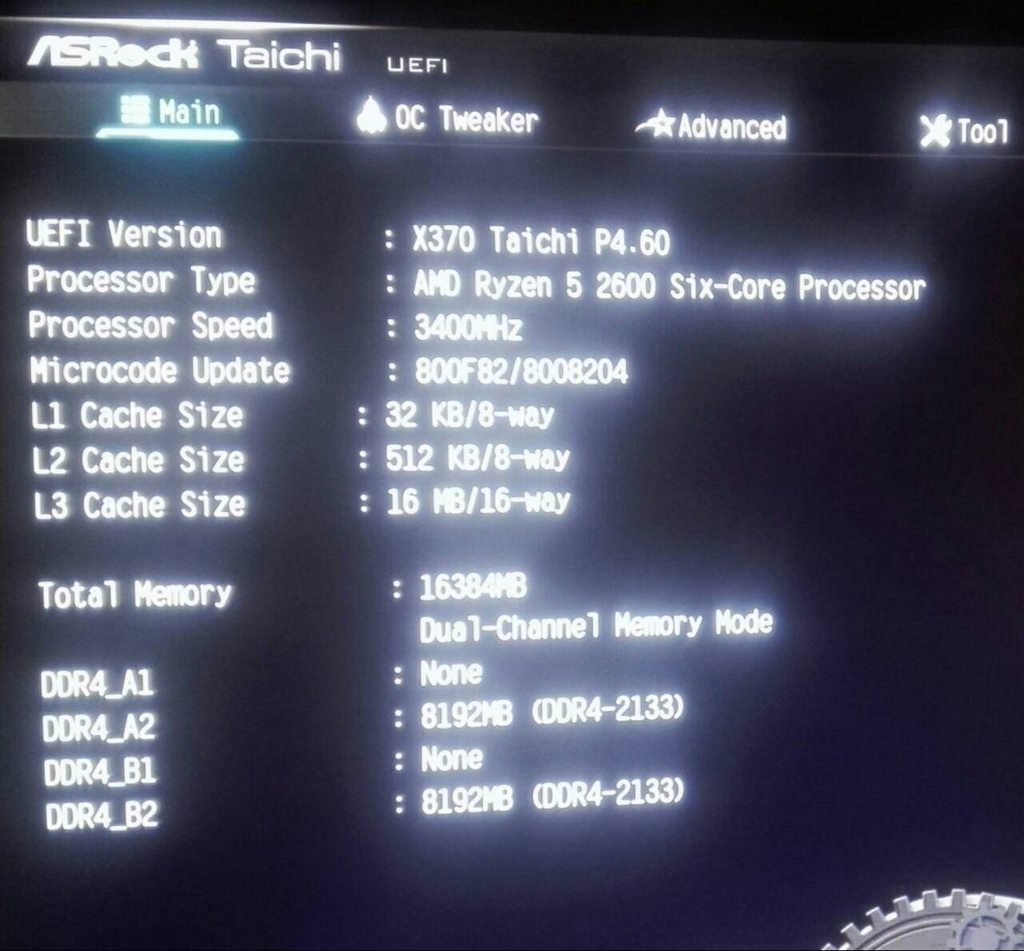 As expected tho mem support and latency got better.

When it comes to benchmarks, the Cinebench R15 score for the Ryzen 5 processor was 1384 at 4.0 GHz and with memory at 3333 MHz. This was the most stable speeds the chip ran at to post the CB R15 score. Other tests include AIDA64 Cache and Memory benchmark which reported a maximum of 61.0 ns latency for the memory along with 46787 MB/s Read, 46397 MB/s Write and 43877 MB/s Copy speeds. These scores were obtained with the memory running at 3466 MHz at CL14 timings.

Now, here's some key takeaways from this testing by the user. First, the chip being tested in a Non-X part. This means that overclocking and Boosts may not be on point as the X-series parts. But, it should be noted that AMD marks all of their Ryzen 2000 series chips to support overclocking. So even if these chips are running on an older platform, they fully support overclocking and a ASRock X370 Taichi is very much capable of overclocking a Ryzen CPU (1st or 2nd Gen).

Second thing to note is that the memory latency has improved and we can see faster memory support coming to AMD's platform very soon. But for those who are expecting major overclock numbers out of the Ryzen 2000 series processors, I think you should wait for the final reviews as current tests show that it may still be a hit or miss.