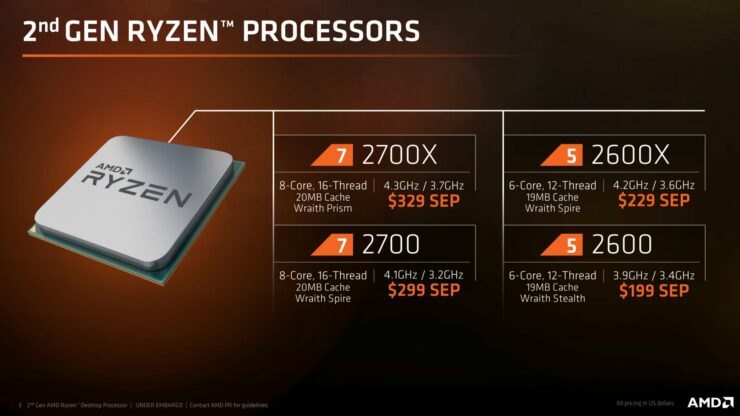 A few hours ago, Newegg and Amazon have allowed preorders on the new AMD Ryzen 2000 series Pinnacle Ridge CPUs and X470 motherboards. After months of waiting the new CPUs and motherboards are finally available to order. The Release date for the CPUs is set at 4/19 with the motherboards releasing a day earlier on 4/18. For a little about each chip, lets go into detail.

Frankly The AMD Ryzen 2700 seems like a whole lot for the price, this CPU is going against the locked Intel i7 8700 which isn't as capable as its unlocked brother and should do very well in this price bracket. It like its flagship bigger brother the 2700X shares all the same features but at a much lower 65w TDP and comes packed with the same cooler.

The AMD Ryzen 5 2600 comes with the same technical aspects of the Ryzen 5 2600X but has lower TDP like the Ryzen 7 2700 and as such, it comes with lower clock speeds too. The 65W TDP allows for a 3.4 GHz base and 3.9 GHz boost clock while the packaging includes a Wraith Stealth cooler at a price of $200 US which makes it compete against the 40 USD more expensive Core i5-8600 SKU.

The specs for the CPUs are as follows

While for the motherboards most of the additions are for allowing the new XFR profiles for maximum performance with Ryzen 2000 Pinnacle Ridge CPUs. That being said aside from more I/O functionality those with a B350 or X370 motherboard should be fine and if you plan on overclocking anyways, you wouldn't get much benefit. Though if you are considering jumping on the Ryzen train now is as good a time as any to pick up one of these boards. We note all the major players listed here, from ASUS, Asrock Gigabyte and MSI all showing their motherboards off.