AMD seems to be working hard to get their next generation of GCN powered discrete graphics chips out in 2016. Just yesterday, we covered some great details regarding AMD's 2016 GPU strategy as the company is eyeing for rigorous performance/watt improvements in the latest GCN (Graphics Core Next) architecture and designs for their upcoming discrete GPUs. The details we share do give some insight on AMD's plans for the upcoming year but more or less, it confirms that the GPU makers are finally shifting from the current 28nm process to the latest 16/14nm FinFET process. 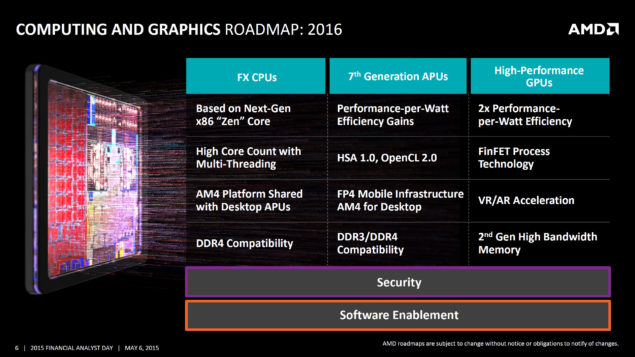 While AMD is keeping their lips sealed regarding their 2016 GCN plans, head of the graphics division at AMD's Radeon Technologies Group, Raja Koduri, spilled the beans during a chat with Forbes (Source: Forbes). During the brief chat, Raja Koduri confirmed something which we all have been waiting to hear. Raja Koduri confirmed that AMD is launching two brand new GCN GPUs in 2016 which will feature their next generation GCN architecture along with FinFET process technology and the two times energy efficiency which AMD had promised in their slides during the Financial Analyst Day 2015. Now this is  a major indication of AMD's GPU plans for 2016 as the company has promised two brand new GCN GPUs for the upcoming year. Even though we don't have any information regarding the GPUs mentioned, it is easy to predict that these new GPUs will be powering the high-end enthusiast and the performance sector as AMD has also put a lot of emphasis on "High-Performance" in their previous slides.

Now the interesting thing is that AMD has two new GPUs set for launch in 2016 which means that they will have to rely on some existing cores to power their mid-range and entry-tier offerings. We might once again take a look at Hawaii, Tonga and Fiji (definitely Fiji has to be part of the Radeon 400 series) in the upcoming graphics lineup from AMD. The Fiji GPU showed that one chip can scale down to several products, from the upcoming Fury X2 down to the high-performance Radeon R9 Fury X, the competitive Radeon R9 Fury and the small form factor focused Radeon R9 Nano. AMD may try to apply the same strategy to their new cores which will make use of HBM2 memory architecture and rumored to feature up to 18 billion transistors and 32 GB of VRAM. The more surprising thing is that we might just see a further revised and price-cut Tonga down in the sub-$200 range along with a further price cut Hawaii if AMD doesn't plan to replace it all of a sudden with a new GPU offering. Regardless, AMD will have an array of both HBM1/2 and GDDR5 powered solutions for the market.

Another thing our source mentioned was that AMD will be increasing its focus on ISVs and Software in 2016 and 2017. This means new initiatives and polishing existing software. Part of this can already be seen by the new Radeon Crimson drivers and it looks like there is more in the pipeline. A good guess (caution: speculation) on what might be coming includes VR, since that is pretty much the new killer app (or rather killer-field) for gaming nowadays. You might remember that AMD has been increasing focus on virtual reality with its LiquidVR dev kit. Source

While this is good news for the enthusiast users, it more or less means that the entry and budget tier markets would be getting current GPUs under a new naming scheme and at a lower price. For the first time since 2013, AMD will have to new GPUs launched in the market aside from the 1 GPU launch which they have done since HD 7000 series (Hawaii in 2013, Tonga in 2014, Fiji in 2015). This does mean that some of the current GPUs that are going to be featured again in the lineup at lower prices will be going against a large array of new GPUs from NVIDIA built on their Pascal GPU architecture with HBM2 and GDDR5 variants. The Pascal GPUs will range from entry level to enthusiast level offerings so it remains to be seen how AMD plans to tackle them with just two new GPUs. Note that there could be several cut-down SKUs of the new AMD GPUs as this strategy like detailed above has not only worked well for AMD and their cards but also for NVIDIA as they have launched several SKU offerings based on either two or three GPU cores (GK104, GK110, GM204).

AMD is giving the company a major overhaul with the new Radeon Technologies Group as it plans to make Content a key focus to deliver better utilization of their hardware suite. The strategy involves working and building relations with game developers to deliver better performance on their graphics products. AMD's competitor, NVIDIA, has had major success by enabling their team to work close with game developers in the form of TWIMTBP (The Way It's Meant To Be Played) initiative which has been going on for years now and green team has had some great success with major AAA title releases as more and more games are optimized for their hardware. AMD's own Gaming Evolved strategy will be taking a new direction in 2016 with more interaction being made with game developers as they focus on tuning their chips for some major launches in this and upcoming year along with focusing on upcoming graphics trends such as VR (Virtual Reality) and AR which is picking up the pace quite well in the tech world. 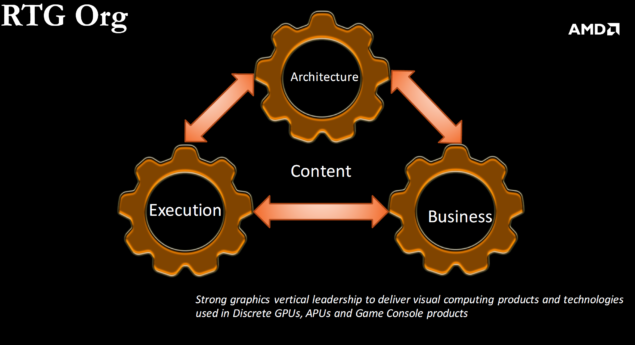 AMD recently announced a farewell to their Catalyst Driver and are bringing the latest AMD Radeon Software driver codenamed Crimson which is being made by the new RTG team as a fresh and new offering for the AMD GPU users. AMD's hard work also payed off in DirectX 12 as they implement hardware Async support in their GCN powered GPUs and the upcoming cards are going to further leverage from DX12 titles arriving in 2016 and beyond. If all goes as AMD has planned, then they expect to gain some momentum in 2016 and gain some of the discrete graphics market share back from NVIDIA who currently enjoys a 81.9% market share in the discrete graphics card market (as of Q2 2015) and their GPU market has seen record profit in Q3 2015 (FY 2016).  The corporate structure at AMD now is far more effective and comprehensive than it had been for the past several years. We should see the dedicated CPU and GPU groups at AMD take on a razor sharp focus and play a much more aggressive role in the PC industry’s perpetual game of chess.