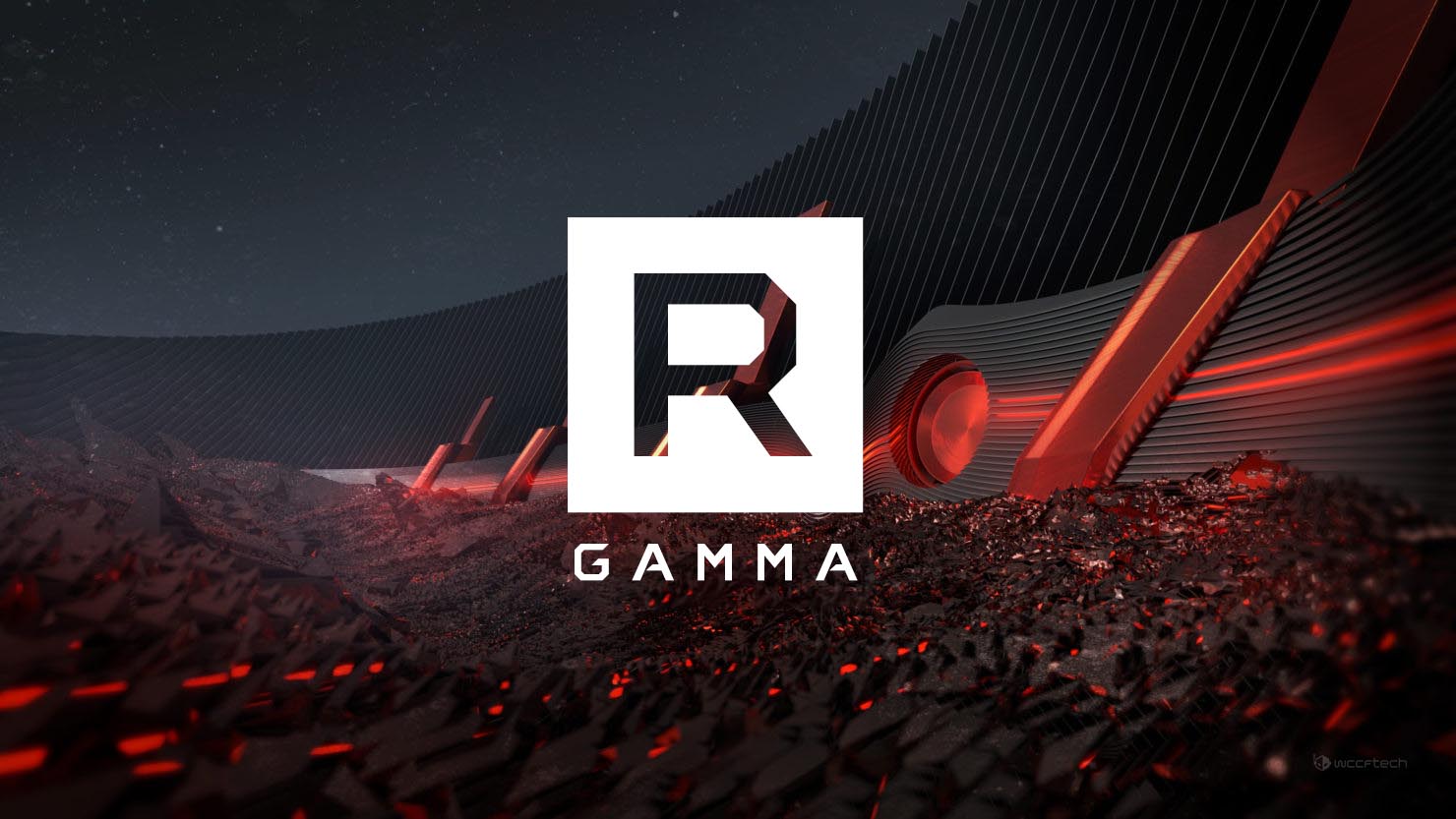 Update: This is an April's Fools joke. 🙂

A massive leak has just sprung from an unprotected link on the website of an AMD partner site. It is also something that immediately puts into perspective a lot of the leaks we have been seeing so far. AMD's next-generation GPU will be known as Radeon RX Gamma XT. If you are thinking that this name has come out of nowhere then think again - because Gamma Cassiopeiae is the actual name of the star informally known as Navi. This ladies and gentlemen is the long-awaited Big Navi GPU.

The slides leaked appear to have been shared with AMD AIB and partners are represent the initial specification as well as an internal reference design for the shroud. From the looks of it, this is a dual-fan design of pretty much the same reference block as small Navi. That said, I am pretty sure this design is just for internal testing purposes (and not indicative of the final product) for now as AMD has already teased a much sexier looking design for big Navi.

A block diagram of the upcoming Gamma XT GPU has also been leaked. The compute engine capacity has been doubled and is referred to as QCU or Quad Compute Unit. What is (pleasantly) surprising is the fact that the card sustains a clock speed of 2.633 GHz - which is absolutely insane. The only reason a clock speed jump like this would be possible is that the card is manufactured on an EUV based 7nm process. TSMC was planning to roll out its 7nm EUV based process this year and it looks like AMD has managed to grab a piece of that pie. 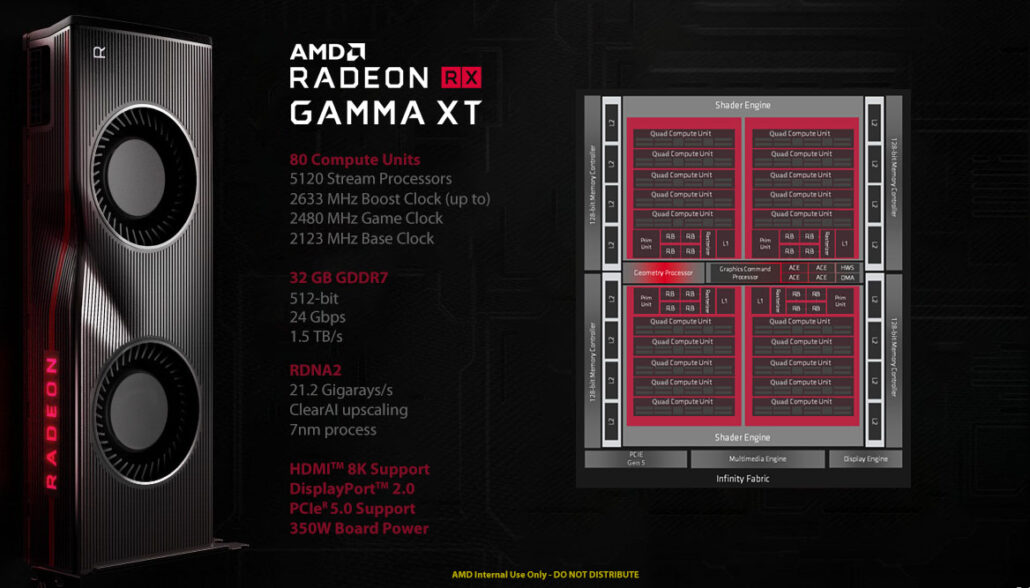 Overall, the card contains 80 compute units. Since the slide mentions 5120 stream processors, we can now lay to rest rumors about an increase CU to SP ratio. It is still 64. The clock speeds are divided into 3 categories just like small Navi and the highest clock speed goes all the way up to 2633 MHz. Based on this clock speed and assuming the same instructions as the last architecture, this card can deliver a resounding 26.6 TFLOPs of single-precision compute. This is a phenomenal jump over the last generation and driven not only by an increase in core count, but by an increase in clock speeds as well.

It also looks like AMD has doubled down on ray tracing with support for up to 21.2 Gigarays per second. To put this into perspective, NVIDIA's current generation RTX flagship the RTX 2080 Ti can only sustain a Gigaray count of 10. This is more than twice that amount. What looks like a competitor of DLSS is also listed: "ClearAI upscaling". Depending on the price point, this could very well turn out to be the TITAN killer that all of us were waiting for.

The card will be based on a DisplayPort 2.0 and PCIe 5.0 and a board power of just 350W. A 512-bit bus will complement 32 GB of GDDR7 memory clocked at 24 Gbps. HDMI 8k is also supported for those that have compatible displays. The card is built using AMD's RDNA2 architecture and a 7nm process (likely TSMC's 7nm EUV). 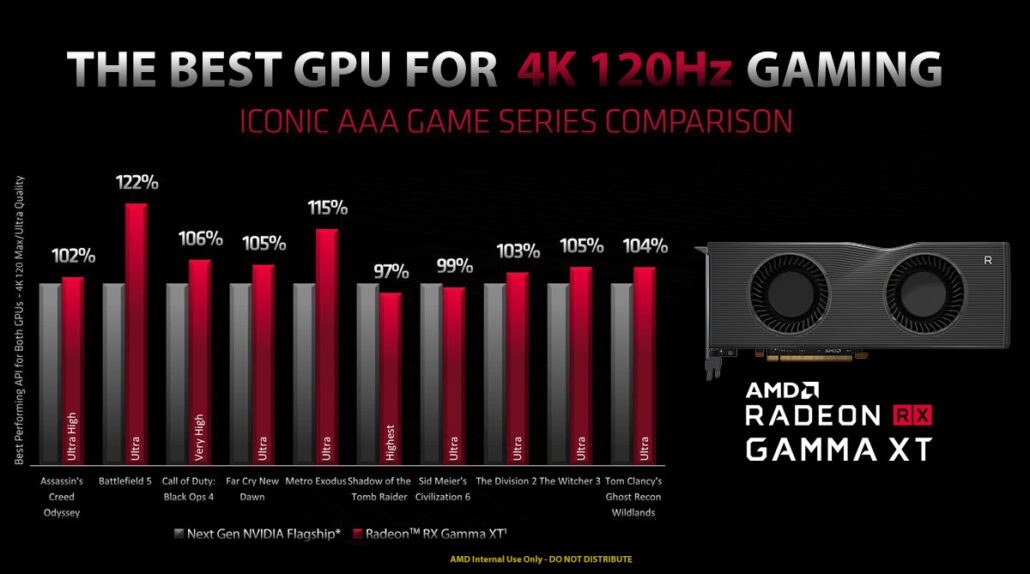 The gravy train doesn't stop there however because benchmarks of the card internally compared against the estimated performance of a "Next-Gen NVIDIA flagship" were also contained in this internal presentation. I have no idea what this Next-Gen NVIDIA flagship is, but I assume this is based on the leaked specification list for NVIDIA Ampere GPU that was expected to launch this year.

I would seriously advise a grain of salt with any first-party benchmarks, and that applies here too, but based on this leaked slide, AMD's RX Gamma XT is more powerful (at least in these games) than NVIDIA's upcoming flagship. The company seems to be targetting the 4K 120 Hz gaming standard - which was pretty much impossible a year ago. It also goes without saying that this positioning depends a lot on what NVIDIA flagship was used (the to-be RTX 3080 or the RTX 3080 Ti). In other words, wait for third party benchmarks or at least more leaks before deciding.