The AMD Radeon R9 295X2 official specifications and pictures have finally been exposed by the always active Videocardz. The fully blown leaks shows the impressive Hybrid cooling design AMD has manged to assemble on their next generation Dual-Chip graphics card which features full Hawaii XT chips for unparalleled 4K and beyond gaming performance. 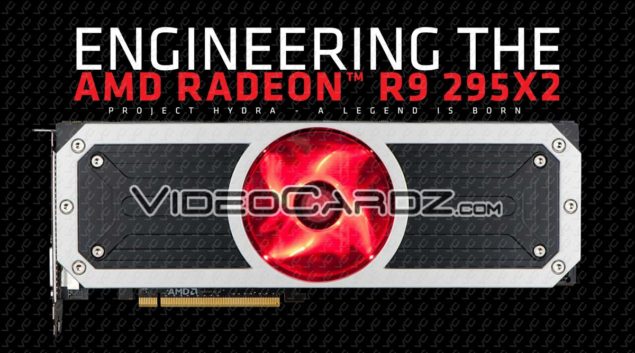 There's a reason why AMD codenamed their upcoming dual-chip graphics card 'Vesuvius'. While everyone had doubts if AMD would manage to fit two Hawaii cores in their next dual chip graphics card, its known now that AMD definitely has the engineering feat required to get two Hawaii XT cores run parallel to one another on a same PCB.

With two Hawaii XT GPUs on the same board, the specifications equate to 2816 x 2 stream processors, 176 x 2 texture mapping units, 64 x 2 Raster Operators and 4 GB of GDDR5 memory on each chip which equates to a total of 8 GB GDDR5 memory. Double these and you get an impressive 5632 stream processors, 352 TMUs and 128 ROPs for an unprecedented amount of gaming and compute performance. Clock speeds are maintained at 1018 MHz for the core which is impressive considering AMD managed to clock their chip 18 MHz faster than the stock variant without worrying about the heat. This shows that the new cooling design has things well kept under control. The 8 GB GDDR5 memory runs across a 512-Bit X 2 memory bus that is clocked at 1250 MHz effective clock speed.

The card draws power from dual 8-Pin connectors which represent 300W while the PCI-E connector adds an addition 75W power so we are looking at a total of 375W TDP however the card is rated at 500W officially for the Radeon R9 295X2 graphics card . Each Hawaii core has a 5+1 Phase VRM which was the standard design on the Radeon R9 290X too and are coupled together via the PLX chip while the xDMA technologies will improve scaling efficiency. Display output include four Display Ports and a single DVI slot which will easily drive 4K Eyefinity resolutions and beyond. This will help drive games at 4K Eyefinity resolutions for better and immersive experiences. 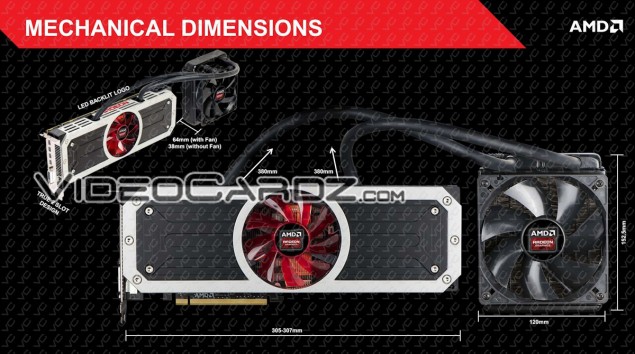 To cool their Hawaii chips and a huge PCB with several VRMs, AMD adopted a neat new Hybrid cooling design they refer to as Project Hydra. AMD went with a 120mm radiator that can be equipped with two fans and assembled inside the PC chassis which leads two 38cm coolant pipes straight to each Hawaii core. The pump and radiator are made by OEM ASETEK who are the leaders in liquid cooling products for graphics and processor technologies. The cooler shroud is a neat new look from AMD that has a silver and black color theme and metal finish. Both the metal construction of the shroud and backplate helps keep the card stable under load avoiding any bends on the PCB and adds to the aesthetics of the card itself. The 92mm fan in the center is colored red and can be seen from the mesh circular opening which is a neat sight plus the fan and Radeon logo on the shroud illuminates Red color when the card is operational.

From performance slides, both official and leaked, AMD has a great card on their hands. The Radeon R9 295X2 is shown to have 16,000 3DMarks which is almost double to what the Radeon R9 290X tough we have to take AMD's words with some pinch of salt since companies do tend to put the best case scenarios in their charts. A benchmark leak we reported earlier however showed great scaling on the Radeon R9 295X2 as opposed to two Radeon R9 290 in CrossFire in Bioshock: Infinite at 4K resolution so it just might be true. We can always wait till launch which is just a few days from now on 8th April 2014.

The pricing is the only mystery left but we suspect that it will be very close to the $1499 US mark considering the enthusiast nature of the Radeon R9 295X2 graphics card. More details on performance and CrossFire scaling will be revealed in the upcoming days. 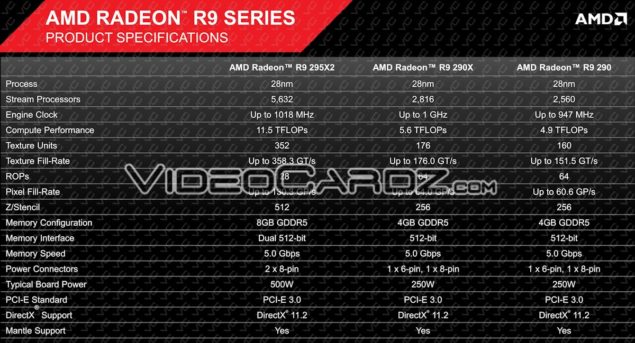