The quarterly report from Jon Peddie Research (JPR) is out and turns out it has been a great quarter for AMD with global GPU shipments up by 9.8%. NVIDIA's shipments were flat for the quarter while Intel's declined by 1.4%. Overall GPU shipments increased 0.6% on a sequential basis but were down 10.4% compared to the year-ago quarter. Considering the overall PC market is up for the year, the reason why the dGPU market is down can only be attributed to the crypto-hangover and inventory-overstocking that was plaguing the markets. That said, it looks like things are finally starting to clear up.

PC market increases by 3.07% year over year as AMD overtakes NVIDIA in graphics market share for the first time since Q3 2014, according to Jon Peddie Research

Another interesting tidbit hidden in the charts is that AMD has overtaken NVIDIA in terms of market share. This is absolutely great news for the company and something that hasn't happened for well over 5 years. In fact, the last time AMD was on top was back in the third quarter of 2014. While the complete details are hidden behind a paywall, we can see that AMD has overtaken NVIDIA in the total Graphics Market Share chart given in their press release below: 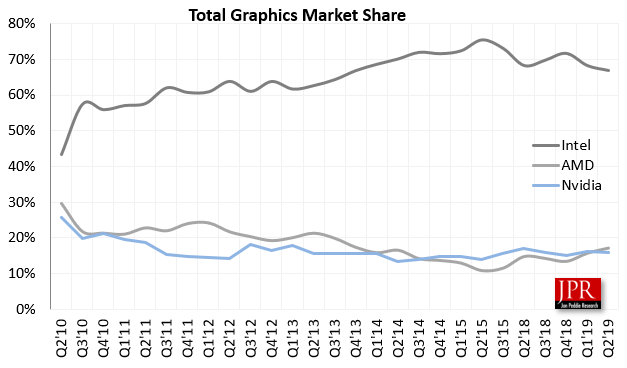 A total of 76.7 million units were shipped in Q2'19 which decreased by -8.93 million units from the same quarter a year ago indicating the market is negative. on a year-to-year basis.

It is worth mentioning that the 0.6% increase in the GPU market quarter over quarter is a positive indicator because seasonally, shipments are usually down 2% this quarter. The report further mentions that while there is uncertainty in the notebook supply chain there have been a ton of announcements in the same space with improvements in design philosophy and internal specifications. Considering the arrival of Zen and Intel's brand new 10th generation processors things are expected to heat up again soon enough. As the dGPU becomes stronger and more power-efficient for the mobility platform, the numbers should go up again.

GPUs are usually a leading indicator for the PC market and considering they were down 10.4% might be taken by some as a forewarning. Fortunately, however, the demise of the PC market has been greatly exaggerated and the naysayers have been talking about it since quite a few years. Considering the crypto hangover is just about over, I personally believe we are now entering natural organic growth once again. With Intel poised to join the GPU market in 2020 and AMD giving NVIDIA ample reason to compete once again, I have a feeling the next few quarters are going to see quite an influx of GPU shipments as the three major players kick into action.

Another interesting observation is that considering NVIDIA launched SUPER variants during this quarter and their shipments were mostly flat, it would seem the new lineup has not been well received even though it made the company more competitive from a price/perf perspective. Considering Jensen loves being the top dog around, I can only assume that this will give them ample impetus to stop lazing around and start a price/tech war. Which is good news for the consumer because that's when they win.

What do you think about AMD overtaking NVIDIA in GPU Market Share?
Pricing and Availability
JPR's Market Watch is available now and sells for $2,750. Included with this report is an Excel workbook with the data used to create the charts, the charts themselves, and supplemental information. The annual subscription price for JPR's Market Watch is $5,500 and includes four quarterly issues.
Share Tweet Submit