A recent report by Fudzilla has spilled the beans on the codename of a certain Zen based processor from AMD: "Zeppelin" . If you are reading this, then you probably know the drill (notice the rumor tag above). We have already heard alot about coherent fabric but this leak not only reveals the exact speed of the data fabric but the codename of a processor that will eventually use it as well.

I'll admit I was slightly queasy about this particular rumor - mostly because it reveals too much and too little at the same time. While the source's history can be considered mostly authentic, this particular slide reveals the codename of a future AMD processor; and since we are talking about an MCM and a custom interconnect, I would be willing to wager this is an Opteron variant. The leak also sheds light on just how much faster Coherent Fabric is from the standard PCIe interface.

The report states that AMD is currently working on a Multi Chip Module that will have a Zeppelin CPU and Greenland GPU connected by Coherent Data Fabric. High Bandwidth Memory (probably on a 2.5D interposer) will be involved as well and will be clocked at 500 GB/s. The homegrown interconnect will support data rates of upto 100GB/s which is alot faster than what the PCIe interface sustains (around 15GB/s). Not only that but latency has been reduced from 500ns to an unknown but allegedly smaller number. 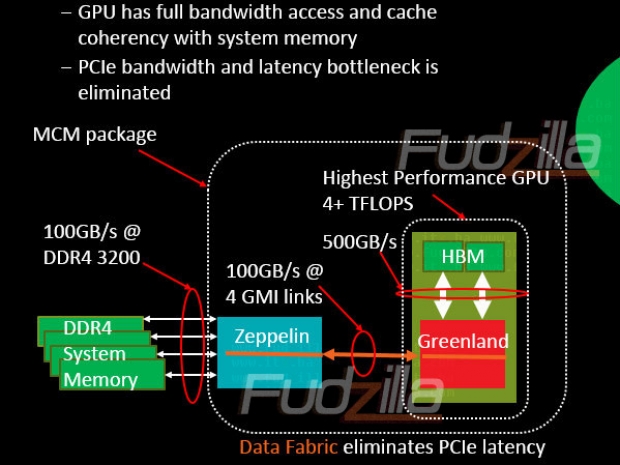 The Zeppelin and Greenland based MCM will feature 4 GMIs or Global Memory Interconnects (which constitute the Coherent Data Fabric I suppose) allowing the CPU to converse with the GPU at 100GB/s. The compute of the GPU is rated at 4.0+ TFlops. Unfortunately, they do not mention whether these are single or double precision numbers and we cant really make any assumptions here either (both are plausible). The MCM itself will contain the GPU and CPU side of things and will talk to the RAM at 100 GB/s as well - allowing for a very HSA friendly environment and minimum bottleneck throughout the whole process.

Previous leaks (from the same source I might add) indicated that the processor will be using AMD’s Coherent Fabric. Each Zen core will have access to 512KB of L2 cache and 4 Zen cores will share 8MB of L3 cache in the ‘Exascale Heterogeneous Processor’. That equates to a grand total of 16MB L2 Cache and 64 MB L3 cache. Each Zen core will be capable of running two threads (thanks to the company’s shift to Simultaneous Multi-Threading). The processor is thought to have 4 DDR4 channels with a capacity of 256GB per channel.