AMD has launched their latest, ARM based, Opteron A1100 SOCs (System on chip), also formerly known as Seattle. The Seattle chips are internally known as Heirofalcon as we came to know from the early roadmaps however AMD has made the naming convention more simple by naming them the Opteron A1100 SOCs. The latest family of ARM based SOCs includes three new chips, details of which can be found in the article below. 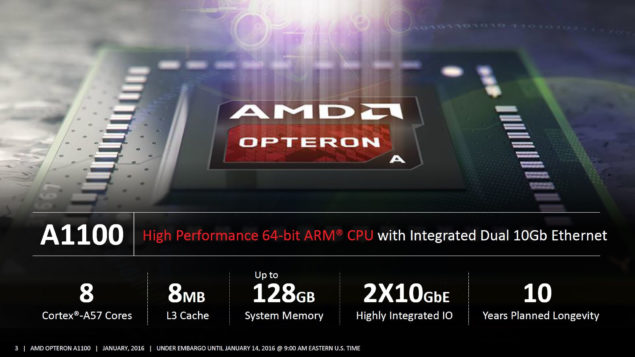 AMD Launches ARM A57 Based Opteron A1100 SOCs For Datacenter

The AMD Opteron A1100 SOCs are aimed at the Datacenter market. These new SOCs utilize the latest 64-bit ARM processors. More specifically, we are looking at up to eight Cortex-A57 cores which come with up to 4 MB of L2 cache and 8 MB of L3 cache. The L2 cache which is 4 MB for the octa-core and 2 MB for the dual core SKU is shared across all cores. The chips have a list of integrated I/O functions which include 8 PCI-e Gen3 lanes (x8, x4, x2 support), 14 SATA III (6 GB/s) ports and dual 10Gb Ethernet support. The processors are fully compliant with ARM's TrustZone and have Secure boot (System co-processor) integration built in them. For memory, the SOCs support Dual channel DDR3/4 memory (w/ECC up to 1866 MHz). The systems are built to allow SODIMM, UDIMM, RDIMM functionality with 1 DIMM capable to run per channel.  Each memory channel can support up to 64 GB of memory adding up to 128 GB of system memory.

"The ecosystem for ARM in the data center is approaching an inflection point and the addition of AMD's high-performance processor is another strong step forward for customers looking for a data center-class ARM solution," said Scott Aylor, corporate vice president and general manager, Enterprise Solutions, AMD. "The macro trend of convergence between networking, storage and servers is an important catalyst in this evolution. Customers now have access to 64-bit ARM processors from the only silicon provider that also has decades of experience delivering professional enterprise and embedded products." 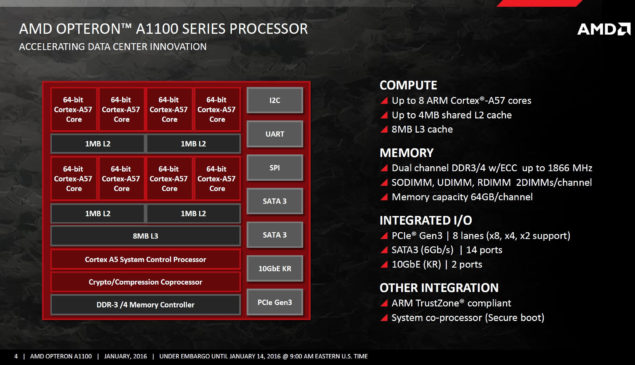 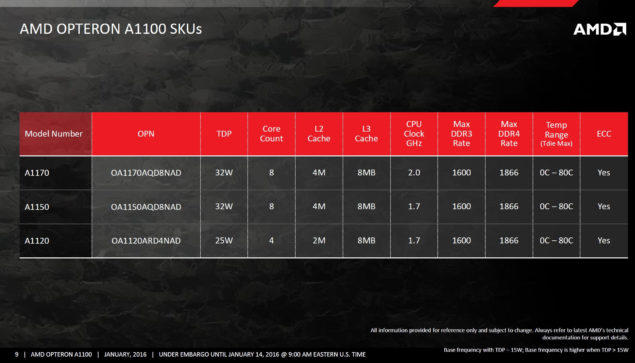 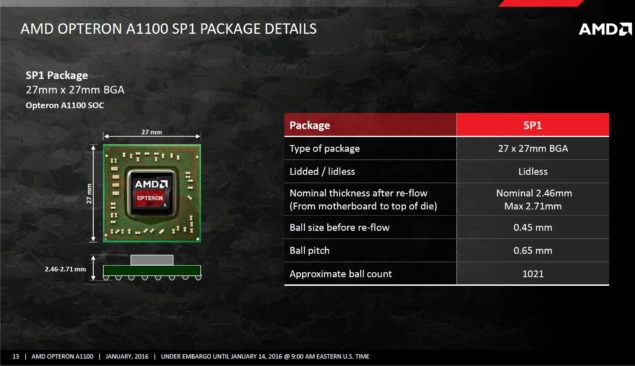 All three SKUs come in a lidless (no heatspreader), SP1 BGA package that measures 27x27mm. The mentioned measurement is specifically for the package size and not to be mistaken with the die size which is fairly small.

The AMD Opteron A1100 SoC is powering enterprise-class systems from SoftIron with its Overdrive3000 system for developers, as well as an upcoming lineup of Software Defined Storage solutions taking advantage of the processor's rich feature set.

"The secret of the AMD Opteron A1100 SoC's appeal is not just the cores, it's everything around the cores," said Norman Fraser, CEO of SoftIron. "If you've got an application where you need to move large amounts of data around quickly, you're going to love it." 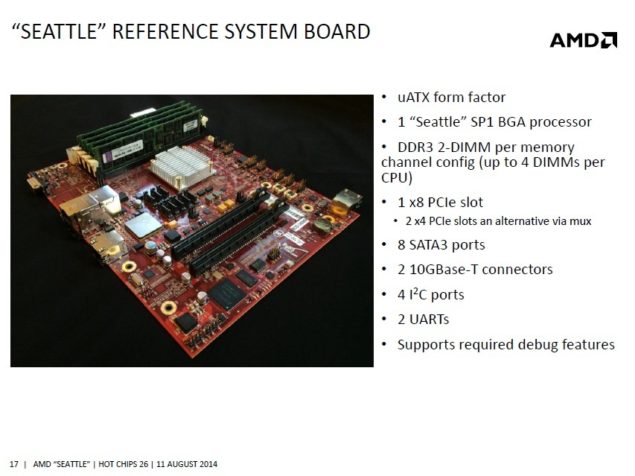 "We are very excited about working with AMD to bring power efficient fabric-based computing to market," said Dr. Ping-Kank Hsiung, Managing Director of Silver Lining Systems. "Combining the efficient AMD Opteron A1100 processor with our unique fabric will help drive down costs and power requirements of hyper scale computing and storage."

After a long delay, the Seattle SOCs (Opteron A1100) are finally available to the audiences in the datacenter market. Some benchmarks of a leaked Seattle SOC can be found in this article which shows good result for the eight core A1100 chip. Intel has their Xeon-D chips line up as competition against the A1100 SOCs. Technically speaking, the Xeon chips from Intel are based on a more efficient, 14nm process and come with the Broadwell architecture comprising of up to 8 cores, 12 MB of cache and hyper-threading support which retaining a TDP of 35W. The Xeon-D Lineup also comes with chips that feature 12 and 16 cores that are planned to launch soon. 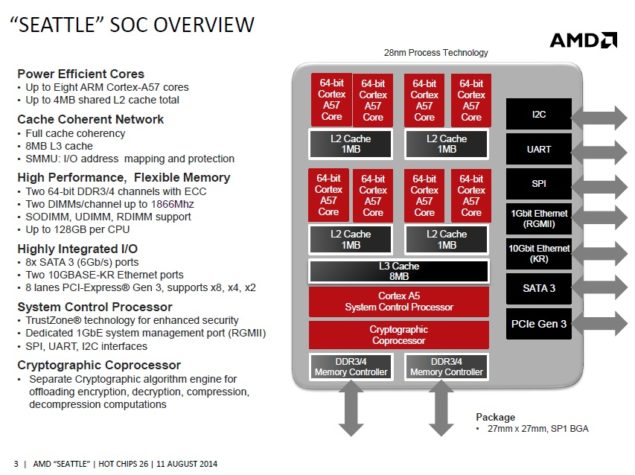