AMD, today officially launches the fastest and most powerful graphic card they have ever built - Radeon R9 290X. The AMD Radeon R9 290X was initially introduced back at the GPU '14 event but only today would it be available for consumers who want jaw crushing performance at 4K resolutions and beyond at an extremely great value of only $549 US. 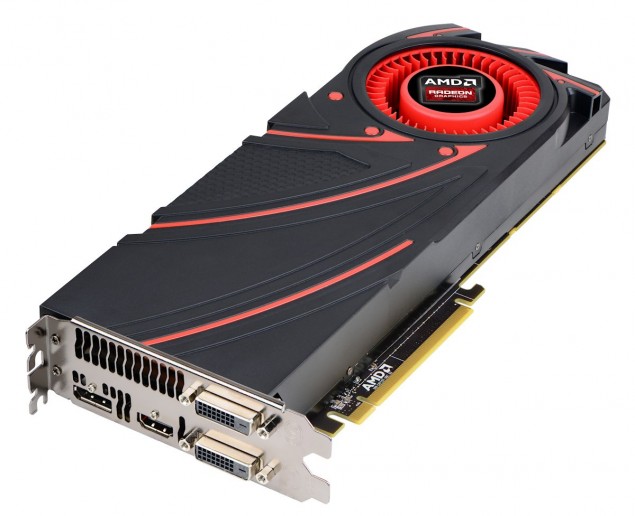 AMD Radeon R9 290X - Straight From The Volcanoes of Hawaii!

With the launch finally taking place, its time to get down and talk about the specifications of the latest Hawaii graphic card briefly. There's alot to talk about such as the performance metrics and architectural details which we will detail in this article but we you would have to rely on the following tech sites for the reviews since we have yet to receive our card from AMD. Do check out the reviews of the AMD Radeon R9 290X in the following links:

AMD Hawaii Architecture - AMD Tackles The GK110 With Their Own Monster

The Hawaii GPU architecture is a step forward from the GCN 1.0 architecture introduced in Radeon HD 7970. The successor aka Radeon R9 290X features the latest GCN 2.0 architecture which is massive in size compared when to the Tahiti core but 30% smaller than NVIDIA's GK110 core which measures at 551mm2. The AMD GPU measures at 438mm2 and has been tweaked and organized by AMD in way to utilize more performance while keeping the efficiency rate twice that of their last generation core. The whole architectural design is a bit similar to Tahiti but has tons of improvements which are enough to provide radical performance enhancements.

While GK110 features 7.1 Billion transistors, AMD's Hawaii is composed of 6.2 Billion transistors on a 28nm die process. Its surprising that even with a billion less transistors, the Hawaii manages to come up so close to the GeForce GTX Titan in terms of performance which features a GK110 core with 1 SMX unit disabled. 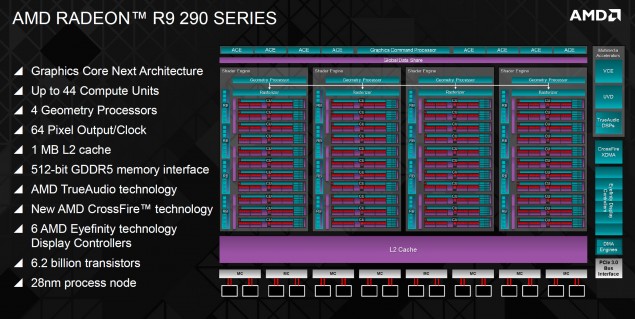 Above, you can see the Hawaii GPU block diagram which shows that the GCN core consists of eight ACE's or Asynchronous Compute Engines modules which is twice the amount featured on Tahiti, right in the middle of these modules is the main graphics command processor to allow global data share. The Hawaii GPU consists of four Shader Engines each with its own parallel linked geometry processors and Rasterizers, each Shader Engine hold 11 Compute units with 64 Stream processor count, the full Radeon R9 290X Hawaii GPU comes with 44 Compute units and a shader count of 2816 streaming processors, 176 Texture mapping units and 64 Render Back Ends.

The Hawaii GCN 2.0 core is comprised of upto four Shader Engines per GPU hence the Hawaii XT chip fused inside the R9 290X is using the flagship core AMD has to offer. There's one geometry process per shader engine as per detailed above which can balance load with other shader engines and has one primitive per cycle.

All Shader engines share the same pool of 16 64 KB L2 Cache with upto 1 TB/s L2/L1 bandwidth. The Hawaii GPU has eight 64-bit MCs or memory controllers which result in the 512-bit bus interface with an abundant 4 GB GDDR5 memory. Multimedia processors are featured along side the main GEs that include VCE, UVD, DSPs for TrueAudio, Six of the New XDMA, Eyefinity Controllers and the DMA engine. Last of all, a small PCI-e 3.0 Bus interface is located which enables support with the latest PCI-e 3.0 enabled motherboards.

AMD has went a step forward with their GCN 2.0 architecture and bestowed upon it a faster 512-bit interface which is a come back for the high-performance graphic cards. 512-bit has been missing from flagship graphics cards for some years now and AMD has made a comeback with a 4 GB 512-bit interface on the Hawaii GPU operating at 5.0 Gbps rate. This pumps out 320 GB/s memory bandwidth which is a phenomenal increase as compared to the 288 GB/s Tahiti.

A GCN 2.0 architecture efficiency slide shows the main improvements between Tahiti and Hawaii and we can note that the geometry processing rate has been increased by 1.9 times with 4 Billion primitives per second on Hawaii compared to 2.1 Billion on its predecessor. Similarly the texture and pixel fill rate have been upped by 30 and 90 percent respectively while the bandwidth is rated at 320 GB/s compared to 264 GB/s on the HD 7970. Lastly, on the compute side users would get 12.8 peak GLops/mm2 compared to 12.2 on Tahiti. The Hawaii Radeon R9 290 series has a larger die size of 438mm2 so we are expecting upto 5.6 TFlops of compute power.

AMD is also introducing for the first time bridge-less CrossFireX technology which won't require an external connector for CrossFire to work. AMD mentions that the new CrossFire technology for AMD Radeon R9 290X is designed to for AMD Eyefinity and UltraHD (4K) resolution setups. The new technology, as mentioned before allows for direct access between GPU display pipelines over PCI-Express hence no external connectors are required. The technology is fully compatible with AMD’s Catalyst frame pacing technologies which help reduce frame pacing issues faced with Multi-GPU setups which have been a massive problem with the Radeon 7000 series. Lastly, the slide mentions that users would face no performance penalty by with Sideport versus traditional used external bridges for CrossFireX. 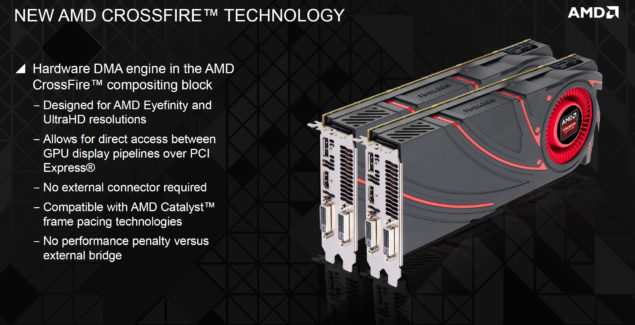 The Dual DMA engines and several new Eyefinity controllers would be able to saturate the PCI-e 3.0 x16 bus bandwidth with 16 GB/s bi-directional access which would deliver a seamless experience in CrossFire gaming performance.

The Radeon R9 290X is the flagship part featuring the full blown Hawaii chip with 2816 Stream Processors divided into 44 CUs (Compute Units). It has a clock speed of upto 1 GHz. Essentially, the graphic card features two clock speeds at which it operates. These are configured through the card’s Dual BIOS switch that is located right next to the place where the CrossFire bridge is located on Radeon cards. Most reference cards don’t ship with Dual BIOS support and this is probably the first flagship GPU to ship with such an option. The high stream processor and core count allows the Radeon R9 290X to deliver a compute performance of 5.6 TFlops. It features 64 Raster Operators which are twice the amount featured on the Radeon HD 7970. 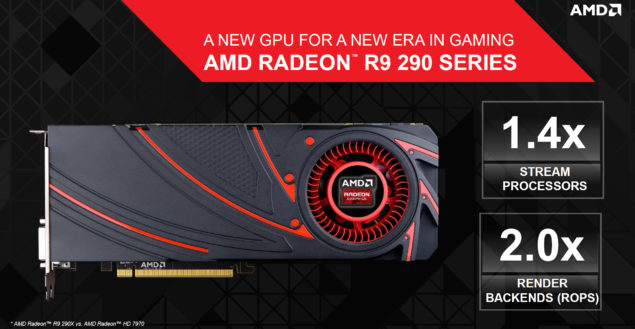 At stock frequency, the card operates at 800 MHz and the Boost clock pushes it up to 1000 MHz. Further OC can be achieved with the new PowerTune enhacements which are easily accessible through the latest AMD overdrive software available in the new Catalyst Control Center.

In addition to the core specs, the Radeon R9 290X comes with a generous 4 GB GDDR5 memory which runs along a 512-bit interface. The clock speed for the memory is effectively maintained at 5.0 GHz that provides a bandwith of over 320 GB/s. The Radeon R9 290 Series is mainly targeted towards the Ultra High-Resolution audience who want to play the upcoming titles at 4K resolutions and beyond that since AMD were showing demo’s of Eyefinity 4K monitors running over a single Radeon R9 290X GPU. The Battlefield 4 Angry Sea gameplay was also demo’d on a single Radeon R9 290X in Eyefinity. The Radeon R9 290X features Dual-DVI, HDMI, Display ports for display capability and has a single 6 Pin and 8 Pin power connector to juice it up. 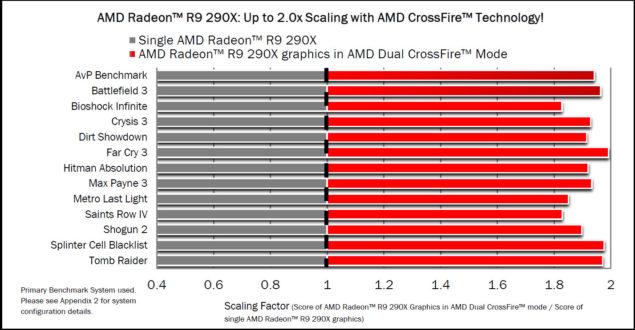 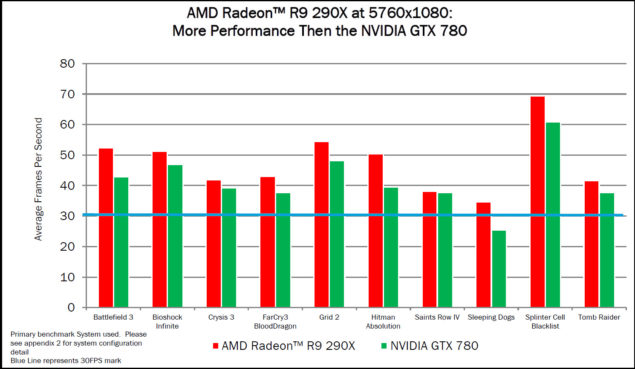 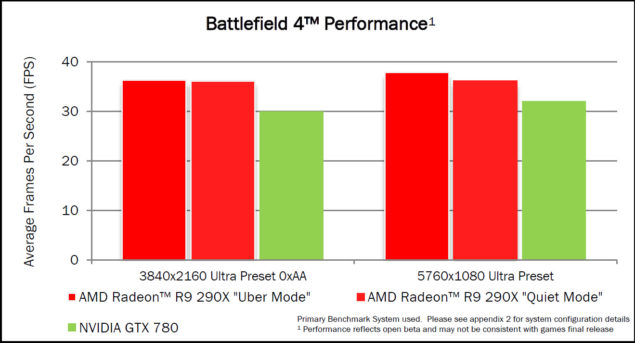 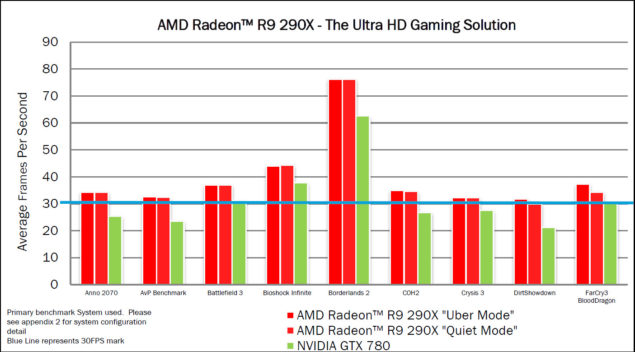 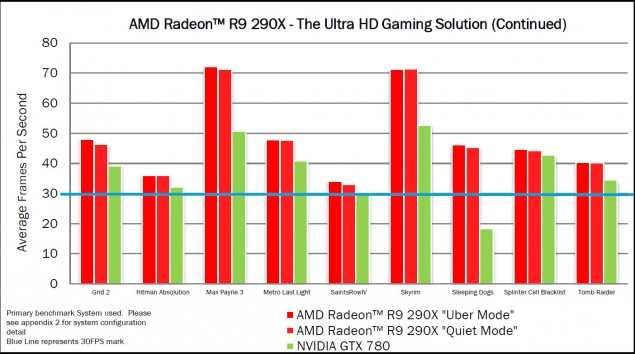 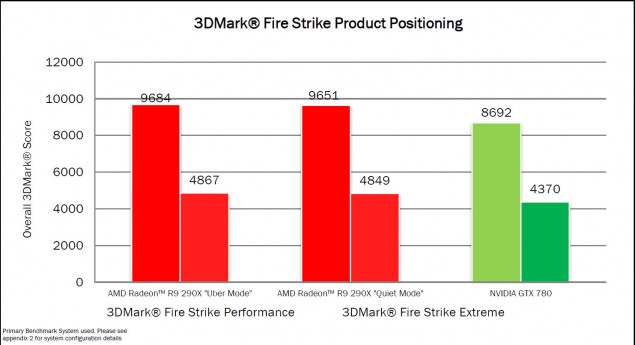