The AMD Radeon 300 Series cards which include the Radeon R9 390X, Radeon R9 390, Radeon R9 380, Radeon R7 370 and Radeon R7 360 have been officially revealed at the PXGaming Show. The new cards feature AMD's GCN core architecture which has been used in graphics cards over the last three years and has received several new revisions that deliver updated technologies and features. 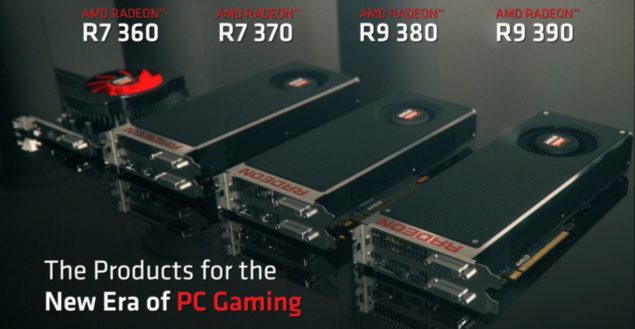 The AMD Radeon 300 series exists of several cards based on chips which we might not have heard of before but definitely know them by a different name in the existing cards. The top most Fiji GPU is the only new chip in the lineup followed by Grenada which is a new name for Hawaii GPU, Antigua is the Tonga GPU core, Trinidad is the Pitcairn GPU core and Tobago is the Bonaire GPU core. All these GPUs feature aggressive prices followed with additional VRAM to deliver perfect performance suited for a specific resolution. Listed below are all cards that have been launched within the 300 series lineup along with their specifications, performance and launch prices:

Starting off with the top end AMD Radeon R9 390X, we are looking at the Grenada XT (Hawaii XT) core with 2816 stream processors, 176 TMUs and 64 ROPs. The card features a clock speed of 1050 MHz and has the 8 GB GDDR5 VRAM clocked at 1500 MHz that runs across a 512-bit wide I/O interface and pushes out 384 GB/s bandwidth. The card is powered by a 6+8 Pin configuration and will be available at retail with a price of $429 US. The second card is the Radeon R9 390 which comes with the Grenada Pro (Hawaii Pro) core with 2560 SPs, 160 TMUs and 64 ROPs. The card has clock speeds of 1000 MHz core, 1500 MHz memory clock (6.0 GHz QDR) and has 384 GB/s bandwidth output. The card is priced at $329 US. The cards are available in a revised blower styled cooler with a cool mesh and have Dual-Link DVI, HDMI and a single Display connector for display ports.

Next up, we have three Antigua (Tonga Pro) based Radeon R9 380 cards which feature 1792 stream processors, 112 TMUs and 32 ROPs. Featuring a better architectural design over Hawaii, the chip comes at a clock speed of 970 MHz core and has the memory clocked at 1375 MHz for the 2 GB and 4 GB variants. The memory operates along a 256-bit wide bus interface while the card has a rated power consumption of 225W. The cards are priced at $199 US and plus for the 4 GB variants.

Last up is the Radeon R7 360 which is based on the Bonaire Pro core with 768 stream processors that is rebadged to Tobago. The chip is clocked at 1050 MHz while the 2 GB GDDR5 VRAM comes clocked at 6.5 GHz across a 128-bit bus interface. We should see a Display Port, HDMI and DVI-I connector on this card also has a power consumption rated at 150W. You can see details of the reference models in the table below: