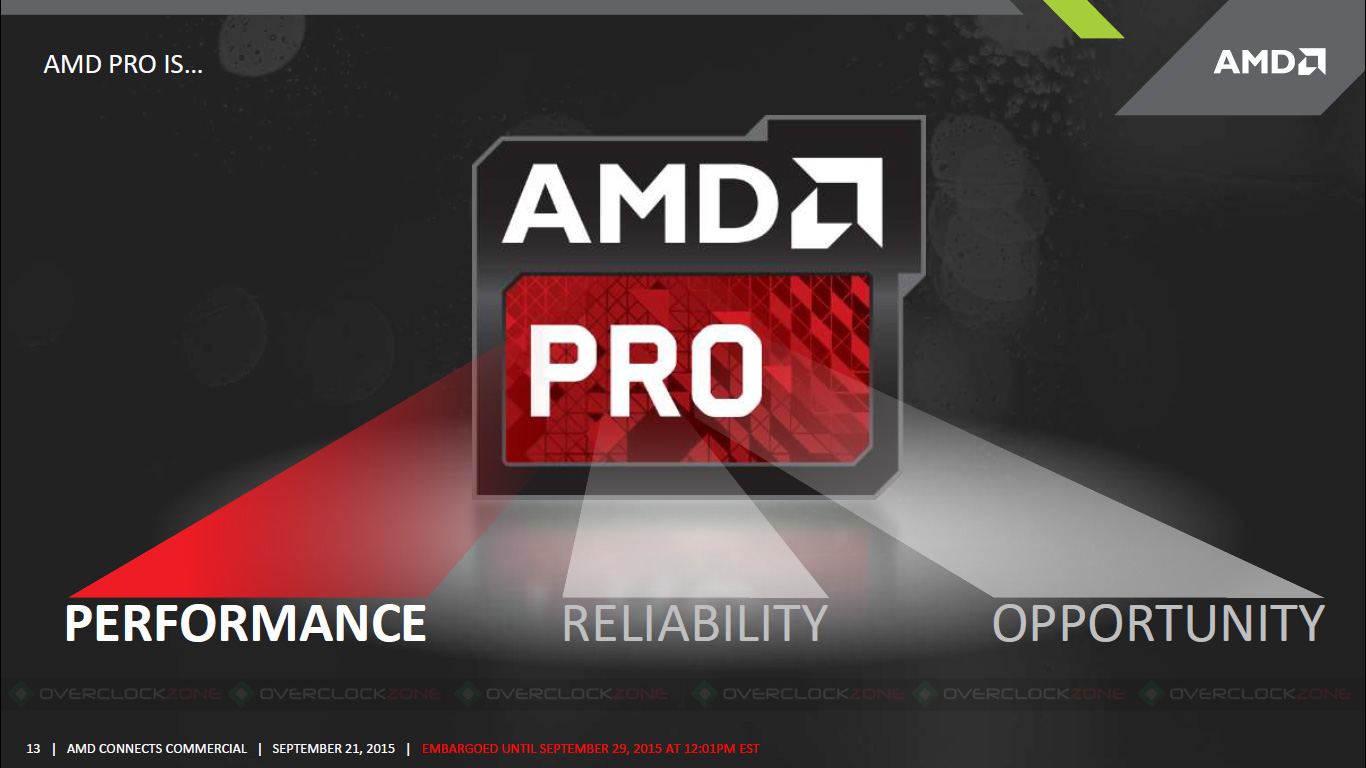 The new line-up consists of AMD's next generation mobility Accelerated Processing Units codenamed "Carrizo" as well as AMD's latest desktop APUs code named "Godavari".
These new PRO A-Series APUs are based on the same silicon as the consumer A-Series APUs, however the PRO series is endowed with a set of business specific features for improved productivity, security and long-term reliability.

The introduction of Carrizo based PRO A-Series APUs brings all the features of AMD's latest APU design based on the "Excavator" CPU core and the latest GCN 1.2 graphics architecture. With Carrizo AMD managed to double the battery life compared to its previous generation 7000 series "Kaveri" based APUs.

AMD also managed to significantly improve ecurity with the integration of a dedicated security processor dubbed the AMD Secure Processor bringing ARM TrustZone to AMD's Carrizo based consumer and commercial processors. Carrizo also features significant CPU and graphics performance improvements achieved through a number of updates to the CPU and GPU microarchitectures as well as higher CPU and GPU clock speeds.

In AMD's announcement, the company made specific mention of a brand new PRO A12 APU which is the most powerful PRO APU the company has debuted yet. The A12 APU features 4 Excavator CPU cores as well as 8 GCN 1.2 - Graphics Core Next - compute units for a total of 12 compute clusters/cores. 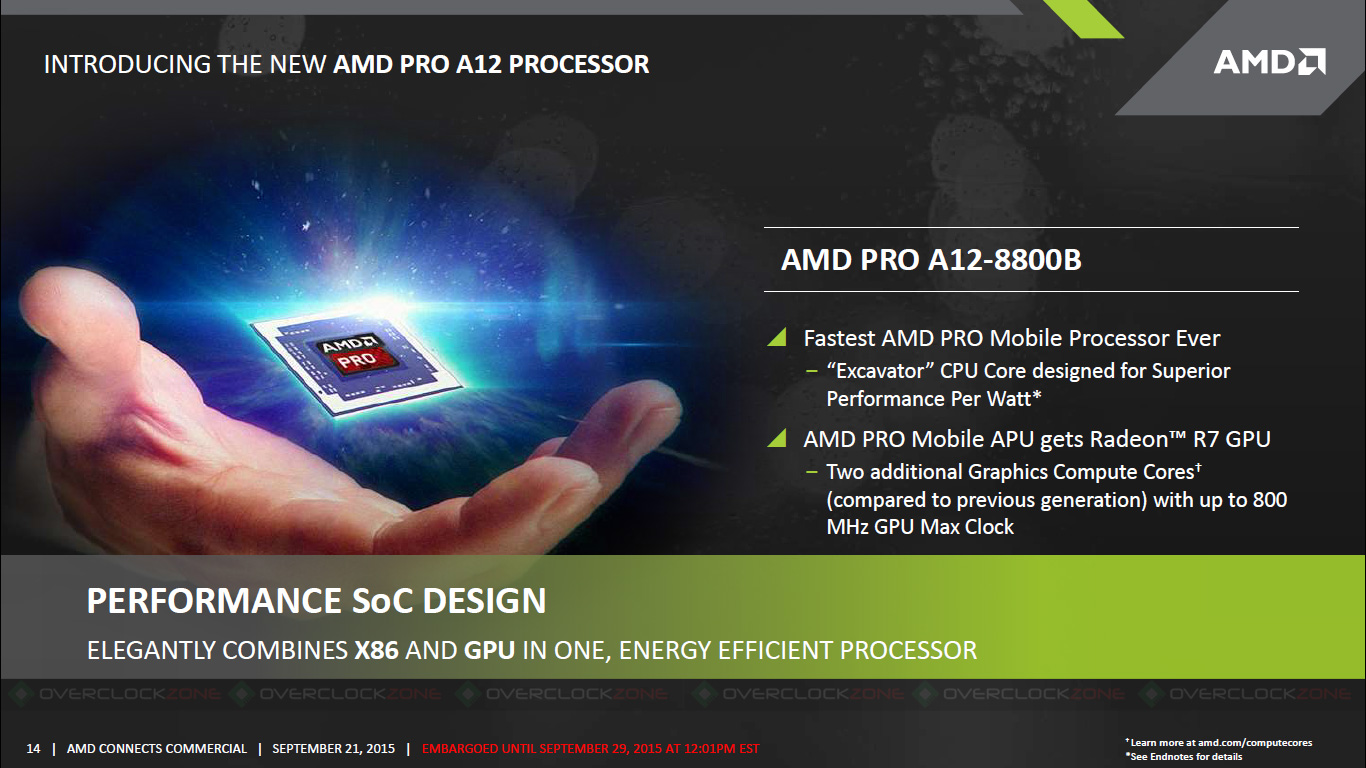 Key features of the new AMD PRO mobile processor include:

"As the industry embraces changes to the workforce, work styles and workplaces, AMD is a critical technology partner for us in developing solutions that can power the modern business," said Alex Cho, vice president and general manager, commercial PCs, printing and personal systems group, HP. "AMD PRO on HP devices gives customers a new commercial-grade processor with the performance to support the changing needs of their business, and we are excited to exclusively offer this processor on our newest line of Elite PCs."

These desktop PRO series processors have been made available on a range of PC towers including the Lenovo M79 Tower, HP EliteDesk 705 Micro Tower as well as a number of small form factor offerings from the previously mentioned OEMs.

"Delivering a no-compromise IT deployment experience has always been a top priority for us at Lenovo," said Jun Ouyang, vice president and general manager, desktop & visuals business unit, Lenovo. "By collaborating with AMD, our built-with-purpose ThinkCentre desktops are better equipped to deliver great value without sacrificing performance or manageability."

Along with the announcement of the new business oriented hardware, AMD has also announced the introduction of a novel piece of software. Dubbed the AMD PRO Control Center this little system management application enables users to do a number of cool things. 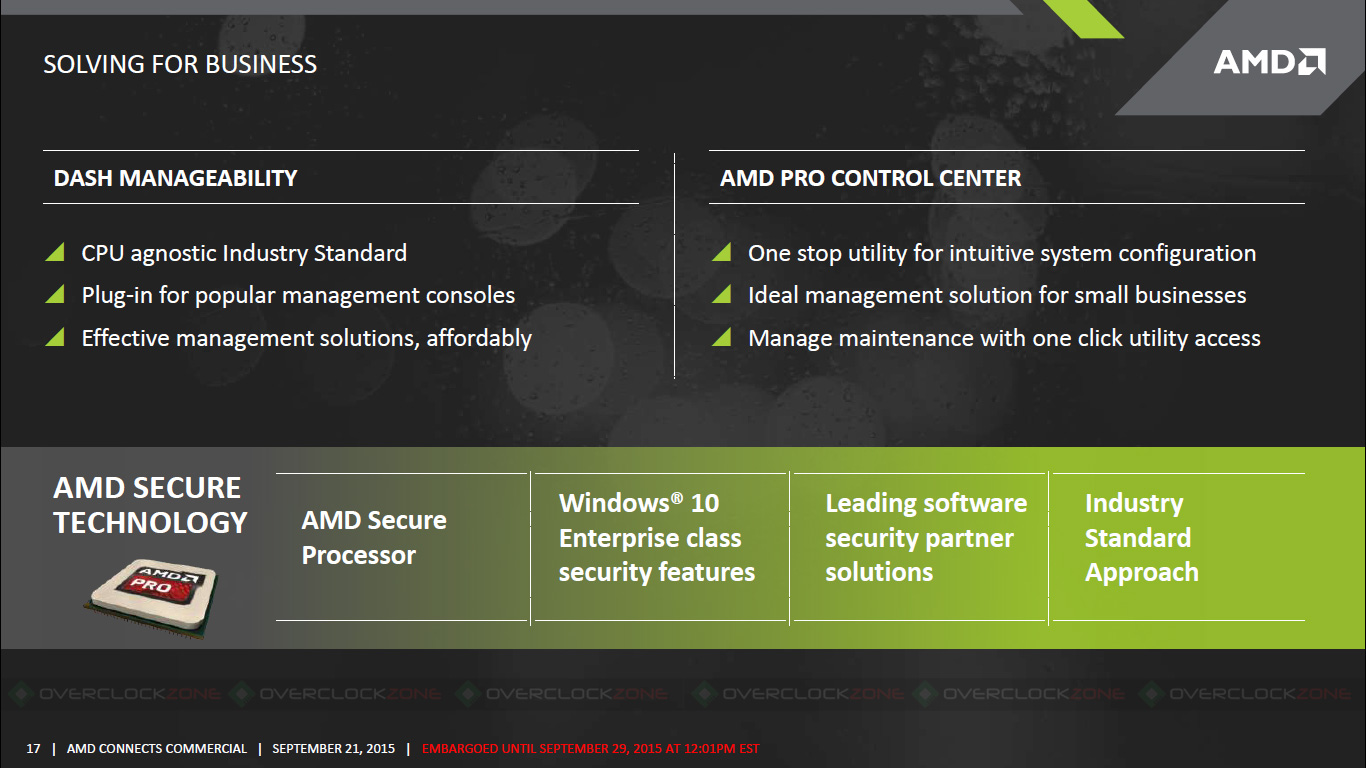 A few examples of what can be done with this tool include setting up machine start-up and shutdown schedules for every day of the week to conserve power. As well as scheduling periodic harddrive defragmentation to maintain system performance and schedule automatic back-ups to mitigate data loss. The tool also includes a variety of other performance and security oriented features which you'll find detailed in the video below.

Finally, in many ways the announcement of Carrizo based PRO A-Series APUs signifies the genuine beginning of Carrizo's introduction to the market. The commercial space is really the ideal market for APUs and with a wide and cohesive feature set such as that delivered with Carrizo, it's bound to prove to be a very attractive infrastructure investment for a wide array of businesses.