AMD announced in late august that it would introduce a new type of bundle specifically targeted towards system builders. These bundles are officially called "Power Packs" and they include six processors in one box. The media jokingly referred to it as a six pack. Anandtech has published an excellent interview with AMD's Adam Kozak who's a Product Marketing Manager for the company. The interview sheds some light on previously unmentioned details of the new bundle. 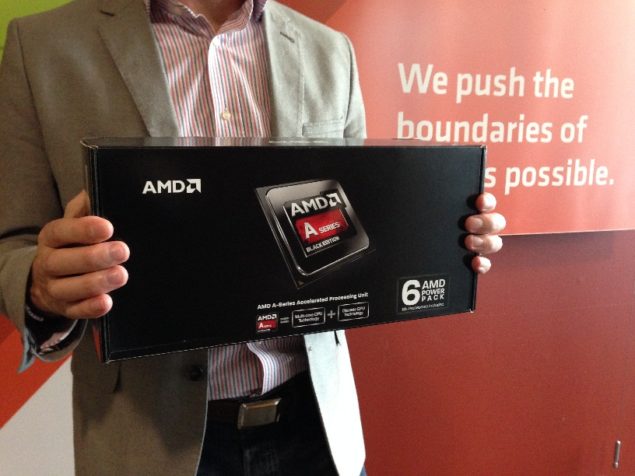 AMD Processors at a Discount for System Builders

The first batch would feature the Richland based Athlon 760K quad core CPU and the Richland based 6600K A8 class APU. This new bundle is focused on relatively smaller system builders that would usually buy boxed CPUs to build systems with. Larger builders would usually resort to buying trey processors without the standard heatsink that comes in the box but would instead add their own cooling solutions. This bundle doesn't necessarily target those types of system builders according to AMD.

What is the expected discount to be over buying them separately?
Currently the difference between PIB and Tray is 5-10% depending on the APU, so the Power Packs will be somewhere in the middle of that, to both offset the semi-bulk purchasing with coolers and without a large chunk of the packaging that might come with a PIB version. Exact discounts will vary between regions.

AMD also intends to extend the promotion to other processor SKUs in the future. So they're only limited to the 760K and the 6600K for the time being.

Will there be different power packs for different regions, e.g. AM1 Kabini Power Packs for those target markets?
As time goes on, we are evaluating each region on what product segments are selling well and what our customers demand. AM1 is doing well in the regions where it is focused for – South America, Latin America, Africa and South Asia. We look at our quarter-on-quarter sales against demand, as well as talking to customers, to find where the Power Pack is best suited. Also, if we see an opportunity before we examine sales figures, we might make a strategic move and offer a particular Power Pack in that region.

This is a good effort on AMD's behalf to strengthen their channel presence especially in areas where small system builders constitute the majority of the market for AMD. The end user might not realize the benefit of this straight away unless the builder chooses to pass its own savings directly to the customers. AMD currently doesn't have plans to sell these Power Packs directly to the end user which I hope changes in the near future. This type of bundle would pose as an attractive option to enthusiasts that enjoy building systems for themselves and their friends.
There's reasonable potential to see AMD extend this to other areas and I'm quite excited to see where AMD might take this next.