A Chinese user on Zol.com.cn forums has posted a CPU-z Screenshot of him running an Bulldozer based Zambezi-FX Processors on a Core clock of 6Ghz. The Processors used was "FX-8130P" which will be AMD's top offering in its Bulldozer Lineup and the overclock was achieved using Liquid Nitrogen.

The 32Nm based AMD FX-8130P comes at a stock clock of 3.8Ghz which can turbo upto 4.2Ghz holding a total of 8Cores/8 Threads with 8Mb L3 Cache, The processor used was an early engineering sample and part of the older revision, AMD announced new Revisions due to performance issues in its current Bulldozer lineup so final clocks of the model would be changed. The clock achieved by the user was 6021.2mhz(223.0x27) on an insane 1.984 VCore, The CPU only consumes 125w TDP while the one in the CPU-z shows 186W. 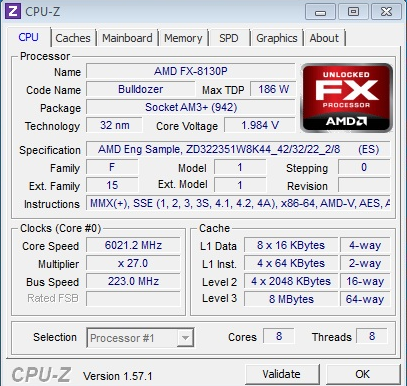