While the latest video game consoles continue to dominate the video game industry with their growing sales, PC gaming is expeditiously forging ahead with a comparatively greater potential, and the two reigning champs in the market for PC video game graphics are putting all their efforts in designing new technology to push consumers’ gaming experience onto a whole new level. AMD thinks that the evolution of GPU horsepower is the biggest factor that is pushing 4K gaming forward, and while elite PC enthusiasts are already enjoying more pixels, 4K gaming will progress quickly in the future with better hardware and graphics. 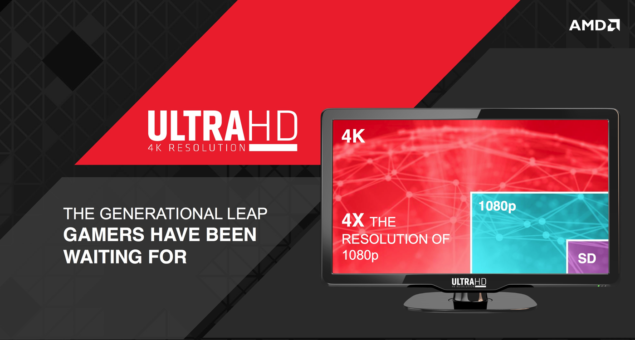 R9 290X was the First Graphics Card to Allow 4K Gaming on Single GPU, Says AMD - Expect Great Progress on 4K From AMD in the Years to Come

In spite of the fact that the PC video game graphics and hardware manufacturers have rolled out effective, advanced technologies for expanding the adoption of higher pixel count for better gameplay experience, 4K resolution displays and visuals are still taking a while to be adopted by a large amount of PC gamers across the globe. There are several issues that contribute to this factor, however, major vendors in the gaming market are working to resolve these concerns and make it easy for standard enthusiast to run the latest games at 4K resolution on their rigs.

Robert Hallock, who works as a part of technical communications for AMD’s Radeon graphics, recently talked to GamingBolt about how PC enthusiasts are gradually adopting 4K gaming and how the R&D department is working for its better future. According to him, the launch of AMD Radeon R9 290X played a major role in enabling players to play latest video games at 4K resolution on a single GPU. Elite PC enthusiasts are actively adopting 4K gaming, but the progress in lower-end segments is still not huge. He pointed out that the biggest factor in driving 4K gaming forward is the evolution of GPU horsepower, and graphics being one of the top priorities for AMD, players can expect considerable progress in future. He said:

“If you think back to the launch of the AMD Radeon R9 290X, our graphics card marked arguably the first time anyone could reasonably expect to play games at 4K on a single GPU. Sure, there were some games that needed two for peak image quality, but one was and is pretty solid for the majority of titles. We were also the first company to offer full support for 4K SST displays in our driver.”

“4K adoption is very popular amongst the elite enthusiasts, but understandably slower being adopted in lower-end segments. I couldn’t characterize the rates with hard numbers as that’s not my area of expertise, but this is the sense I’m getting from interacting with the AMD community every day.”

“Ultimately, the evolution of GPU horsepower is the biggest factor in driving 4K forward. Graphics being such an important part of our business, of course, you can count on great progress on that front as the years wind on.”

What do you think about AMD powering the future of 4K gaming? Share your thoughts in the comments section below.