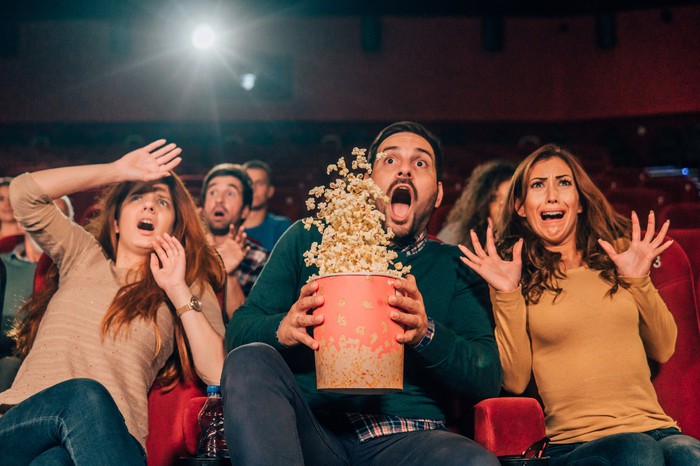 AMC Entertainment (NYSE:AMC), the erstwhile financially distressed movie theater chain that is currently experiencing a revival of fortunes, just made a wildly audacious move, one that places the company in an enviable position to capture the monetary windfall that might result from a global rewrite of rules around sovereign fiat reserves.

AMC is playing on offense again with a bold diversification move. We just purchased 22% of Hycroft Mining (NASDAQ: HYMC) of northern Nevada. It has 15 million ounces of gold resources! And 600 million ounces of silver resources! Our expertise to help them bolster their liquidity. pic.twitter.com/LihqZguwnd

Before going further, let’s recap what has happened so far. AMC Entertainment announced yesterday that it has now acquired a 22 percent stake in Hycroft Mining Holding Corporation (NASDAQ:HYMC), a relatively small gold mining company. AMC’s total investment of $27.9 million in Hycroft will now allow the theater chain to acquire 23.408 million units, where each unit consists of 1 Hycroft common share and 1 common share purchase warrant. Each such unit was priced at $1.193. Concurrently, Hycroft also finalized a similar investment of $27.9 million from precious metals investor Eric Sprott, thereby bringing the entire quantum of investment to $55.8 million.

As per an initial assessment conducted in 2022, Hycroft currently owns 14.65 million ounces of minable gold and 596.4 million ounces of minable silver spread over 72,000 acres in Nevada. However, Hycroft had been experiencing liquidity problems lately, with the company recently flagging the risk around its inability to maintain a “going concern” status in the near future (Form 10-Q, page 12). Of course, the latest round of funding from AMC Entertainment and Eric Sprott should help to alleviate Hycroft’s immediate liquidity crunch. Yet, there is more.

Fun Fact: $HYMC's largest shareholder is Mudrick Capital (they own ~40% of the stock.)

In June 2021, Mudrick bought 8.1mm shares from $AMC (mostly to help Mudrick's debt position) and sold them the same day while telling its clients that AMC's stock was "massively overvalued."

As disclosed in a barely noticed filing, Hycroft entered into an At Market Issuance Sales Agreement with B. Riley Securities yesterday, allowing the mining company the opportunity to sell $500 million worth of common shares via periodic offerings.

AMC Entertainment ended yesterday with gains of nearly 7 percent, while Hycroft was up over 10 percent during the normal trading session. However, Hycroft’s call options experienced a field day, with 3 out of 4 upcoming expirations experiencing a call volume in excess of the open interest. In fact, based on yesterday’s trading activity, 79,313 Hycroft call options were traded vs. just 10,905 puts.

Nonetheless, even a cursory glance at the recent trading activity in Hycroft shares is sufficient to identify a troubling development.

As is evident from the chart above, volume in Hycroft stock started surging on the 08th of March, nearly a week before yesterday’s material investment by AMC Entertainment and Eric Sprott was announced. This is a clear-cut case of someone profiting from non-public material news, raising the risk of an investigation by the SEC.

Regardless of the optics around a formal investigation, we do not believe that the eventuality would materially disrupt the upside potential for AMC Entertainment from this deal, particularly in light of the assumed willingness of the parties concerned to settle with the SEC should an investigation definitively prove illegal trading activity in Hycroft shares during the pertinent period.

This brings us to the crux of the matter. As of the 31st of December 2021, AMC Entertainment had unrestricted cash of $1.59 billion and available liquidity of $1.8 billion. Also, the company had disclosed restricted cash of $27.8 million in its Q4 2021 earnings, almost exactly matching the $27.9 million that it has now invested in Hycroft Mining. This means that AMC’s investment in Hycroft constitutes just 2.6 percent of the company’s unrestricted cash balance toward the end of 2021 – a nominal investment by any definition. However, this move entails quite a lot of significance in light of the recent developments in the Russia-Ukraine war.

As most of our readers would know, in retaliation for initiating an unprovoked war against Ukraine, western powers have now levied unprecedented sanctions on Russia’s financial system, going so far as to cripple the country’s central bank and freezing around half of Russia’s over $600 billion in sovereign reserves.

Sometimes, the remedy is worse than the original onslaught. This is certainly true here. As urgently flagged by former NY Fed staffer Zoltan Pozsar and more recently by Morgan Stanley’s strategist James Lord, the western sanctions regime has now blown apart the utility of holding reserves as a dampener against volatility. Look at it this way. If sovereign fiat reserves – particularly US Dollars – can be confiscated whimsically, they can no longer be classified as risk-free assets. Moreover, this development has also hammered home the usefulness of holding sovereign gold reserves within the jurisdictional reach of central banks, constituting the only sure shot method of maintaining total control over sovereign reserves. This constitutes a paradigm shift, one that would entail a secular tailwind for gold in the years to come. And AMC Entertainment now essentially has a very cheap call option on this seminal change in international finance, should it materialize over the medium term.

To conclude, we remain bullish on AMC Entertainment acquiring a significant stake in Hycroft. However, the blatant surge in Hycroft’s share volume in the runup to Monday’s announcement almost guarantees an investigation by the HEC, necessitating some moderation in the overall risk-on animal spirits of investors.