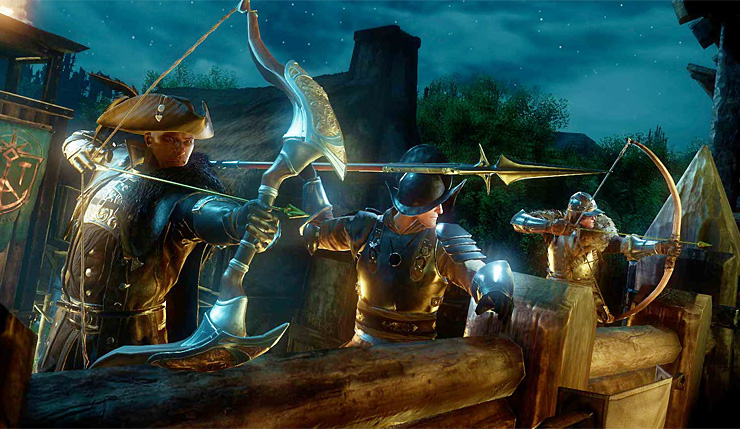 Amazon’s promising new MMORPG New World is set to launch in just over two months, and today during the latest IGN Summer of Gaming broadcast, they showed off perhaps the most ambitious part of the game – the 50v50 PvP War Mode. What is War Mode exactly? Well, there are a number of territories in New World, and if they’re claimed by your faction, you can essentially act as governor, making a lot of money in the process. War Mode is triggered when one of the factions increase their influence enough in a certain region, with the current owners of the region trying to defend their fort, while the attackers attempt to conquer it. You can watch a couple War Mode battles play out, below.

Looks pretty fun, and definitely an area of the game Amazon can continue to grow and improve in the future. Need to know more about New World? Wccftech’s Chris Wray went hands-on with the game and reported on its character progression, crafting, and house decoration. Here’s the game’s official description:

New World is an Open World MMO that pits players against the haunted wilderness of Aeternum, a mysterious island during the twilight of the Age of Exploration. Success in New World ultimately depends on a player’s ability to conquer not only rival players, but Aeternum itself as it unleashes undead legions, hell-bent on purging them from its shores.

Massive battles set New World apart, with fortress sieges against other players and supernatural invasions that feature up to 100 players on the battlefield at once. Combat in New World is visceral and skill-based, giving players direct control over their movements and attacks. Aeternum is rife with danger and conflict, but rich in opportunity for soldiers, explorers, artisans and empire-builders. Players can band together to form powerful Companies operating out of fortified strongholds, or play alone and acquire and customize their own homes as they contribute to the larger community around them. New World provides near-limitless play, with classless character progression, social systems, and rich crafting mechanics.

New World arrives on PC on August 25. A closed beta kicks off on July 23 – you can sign up for that, right here.