Amazon’s Fire TV is getting a new makeover. The company said that the new update will provide a new user interface that will give a ‘more cinematic experience’ to the Fire TV and Fire TV stick. This new interface gives a similar outlook as Netflix when it was previewed earlier in the fall when the company released the latest Fire TV stick. So what are the changes that we will be looking at in this modification?

Before the revamping took place, the navigation was towards the left side of the screen. Now this is present at the top. What this re-positioning did is that it provides Amazon more room to show movie trailers, still images etc. The new interface will allow the company to showcase latest Amazon content at the top of the screen. According to a company member, this new layout will also rotate the video snippets for select titles and apps. Another similarity that the new interface has to Netflix includes the rows of thumbnails that can be scrolled through to look for anything to watch. The “Your Apps & Games” row is customizable and can be tailored according to your preferences by using your remote. The content can be rearranged according so that your favorite apps can be included. 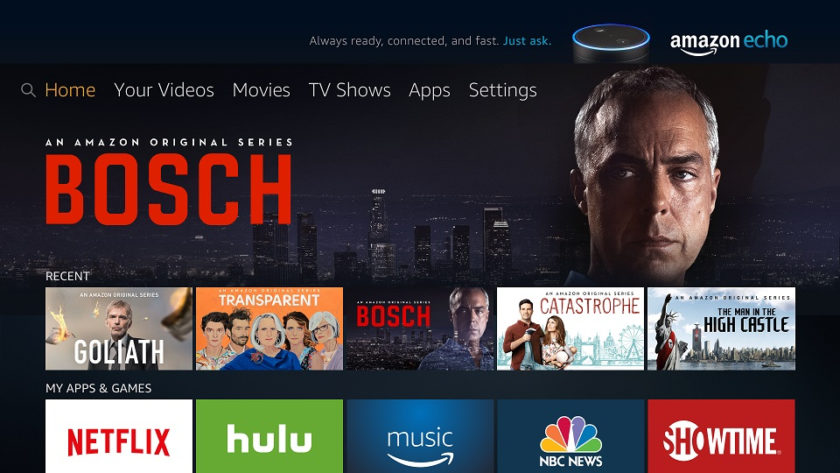 The update not only provides a new user interface but also brings customization to a greater focus. This is a very important factor for all streaming services and media players today and Amazon and using it to its advantage. The company is bringing content from third parties, including HBO and Netflix so that users can see the recommendations from these media giants right on the Fire TV home screen. Amazon is providing these giants with their own rows in the new interface.

And a little more about features

Now you must be thinking that company is just working for third parties and what is it doing for itself? The interface may be bringing the contents from HBO and Netflix on screen but it is also promoting its own content where ever it can. At the top of the screen, Amazon’s titles will still be in heavy rotation and even more the company is making Amazon Music, Prime Photos and the Amazon FreeTime pre-installed applications. These applications can be found in the “Your Apps & Games” section. Other minor improvements include the option to PIN protect apps in the parental controls and enhancements for users that have visual or hearing disabilities of some sort.

Tell us what you think about the new updates.