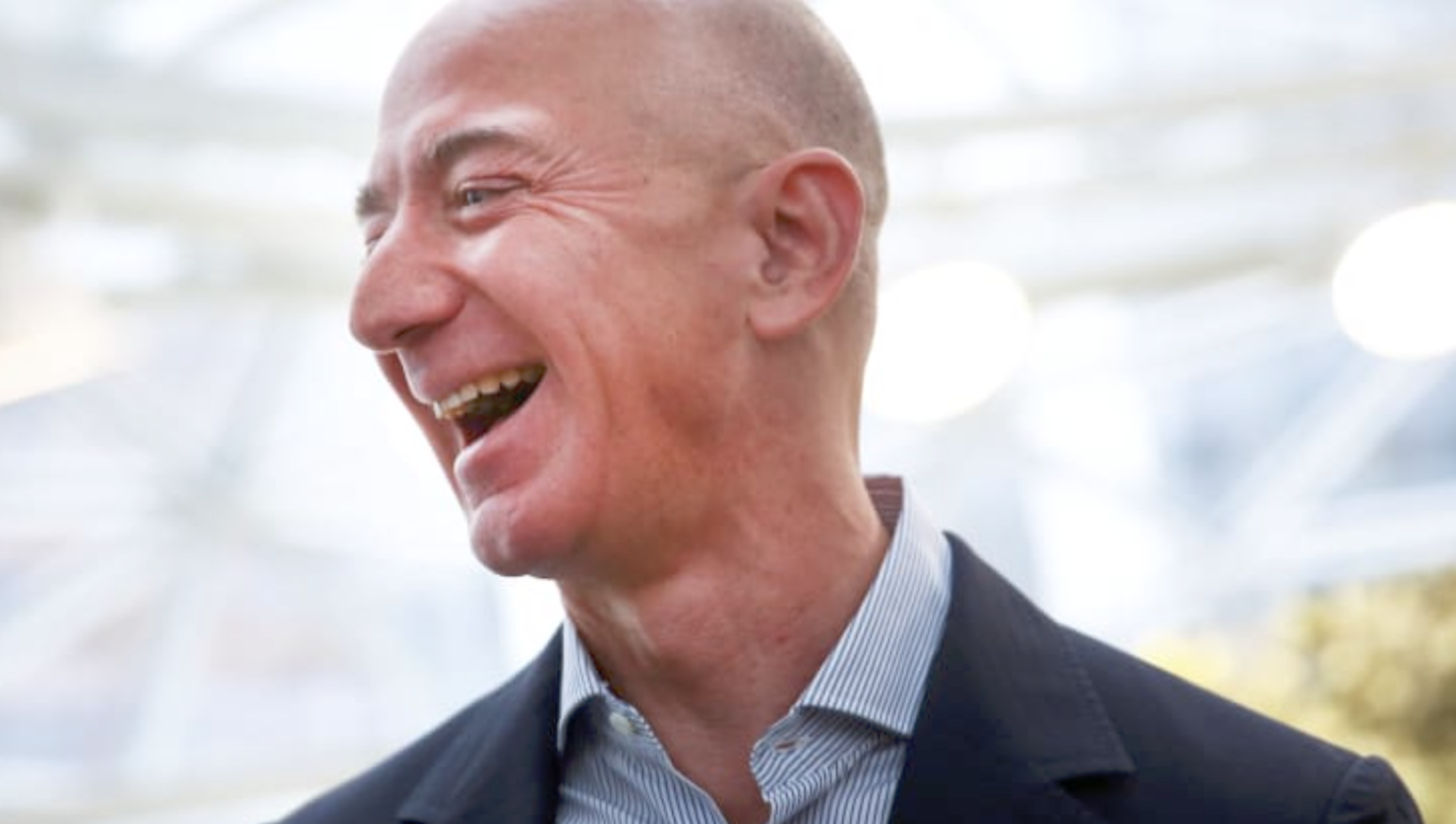 Shares of online retailer and cloud services provider Amazon.com, Inc (NASDAQ:AMZN) are one of the few stocks on the market that successfully weathered the mid-March pandemic-induced crash. Due to the fact that its retailing services - particularly for groceries and other essential items - witnessed extraordinary growth following measures all over the world to curtail the virus outbreak, Amazon recovered quickly in the aftermath of the stock market crash. Since then, the company has only soared to new heights on the open market, and today it has set a new record.

At the commencement of trading today, Amazon opened with a share price of roughly $2,395/share - its highest in the company's history. During the course of the day, this jumped to touch $3,028 at noon, with the jump ensuring that the company becomes one of the few in American history to trade above a $3,000 share price. However, despite successfully crossing $3k mark during today's trading, Amazon's share price is not the highest that a U.S. stock has ever touched, with that honor belonging to billionaire Warren Buffet's Berkshire Hathaway, whose Class A shares were trading above $300,000/share prior to the mid-March market crash.

Given that he owns roughly 11% of all of Amazon's outstanding shares, the company's founder and chief executive officer Mr. Jeff Bezos is bound to also witness his net worth rise. Based on his ownership of 55.5 million Amazon shares on Thursday,  the executive has experienced a net worth increase of roughly $6 billion in less than a week, as investors positively appraise his company's potential. And based on his current ownership and a $3,015 share price, Mr. Bezos is now worth $166 billion at 13:09 ET. 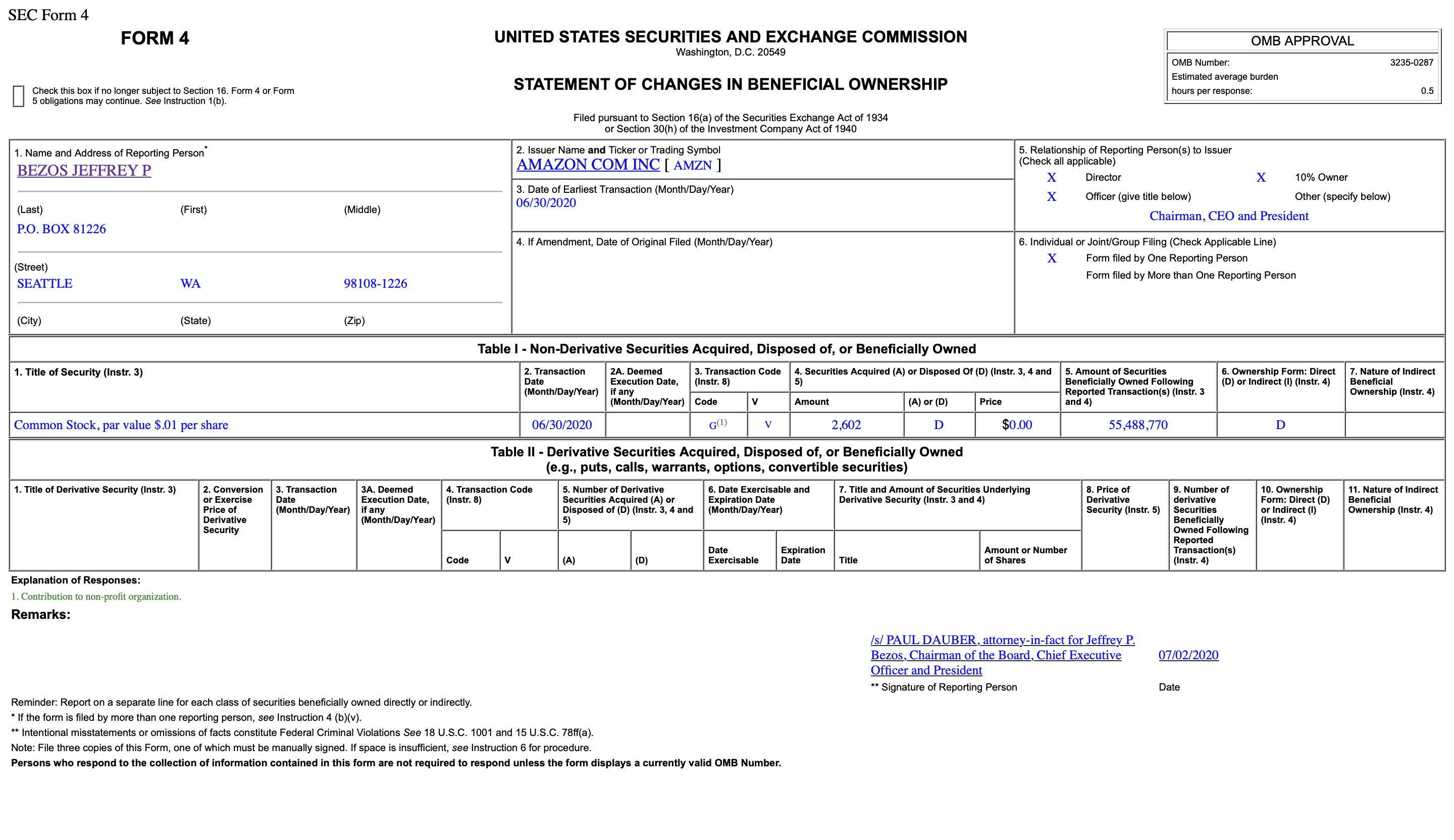 Latest Form 4 filing for Amazon chief Jeff Bezos with the S.E.C. showing his liquidation of 2,602 Amazon shares. Based o current trading prices, this translates into roughly $8 million of proceeds to the executive. (Image Source: S.E.C.)

Wall Street for its part has been quite bullish for Amazon. Analysts expect that recent shifts to digital mediums for grocery and other purchases will stick in the long term. As a result, the demand uptick that Amazon has witnessed for its services will stay in place and therefore continue to generate revenues for the company in the future. Additionally, demand for Amazon's Amazon Web Service cloud infrastructure platform has also exhibited healthy trends during the first six months of this year as corporations and researchers inside the United States experienced a greater need for digital infrastructure.

As a result, Amazon has also become one of the few American companies to increase its operational footprint during a time when most businesses are witnessing severe cash shortfalls. The retailer plans to open new warehouses, one of which is located in New York, and it has already hired new workers to keep operations running in its vast existing facilities throughout the country.

A share price of $3,000 indicates an approximately 11% upside over a $2,708/share consensus price reported by Marketbeat. It also falls more in line with the $3,100/share price target set by Mizuho at the end of last month as it looks as if the research firm was right on the money when gauging Amazon's future.

Today's share price rise comes as the tech-heavy NASDAQ-100 stock index powers ahead and touches new highs despite the presence of a pandemic and economic and political uncertainty inside the United States. During the course of trading today, the NASDAQ has beaten other markets via exhibiting a 2.8% gain over Friday's close. The recent bullish spree exhibited by the index and others calls into doubt concerns that were floating around the street at the tail-end of last month about a second crash expected to wipe the recent gains.