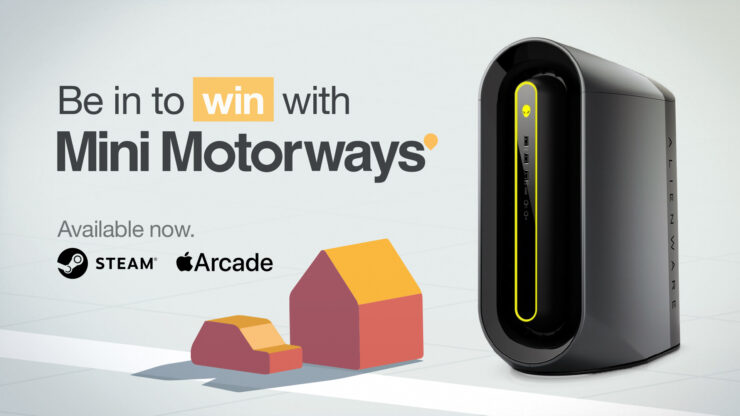 We've got a sizable giveaway for you today, dear readers, thanks to the fine folks at Dinosaur Polo Club. In case you're not familiar with the name, it's the New Zealand-based indie studio behind the surprise hit Mini Metro, a strategy simulation game about designing a subway map for a growing city. The game, rated 8 out of 10 by Rosh in Wccftech's review, went on to sell over five million copies before getting featured in the Apple Arcade App Store Greats collection.

Today, they're releasing their new game, Mini Motorways, on PC (Windows and macOS) via Steam. To celebrate the event, Dinosaur Polo Club is sponsoring the giveaway of 26 digital copies of the game and, most importantly, an Alienware Aurora R10 Gaming PC.

The latter is quite the prize, given that its value easily exceeds $1K. Here are the full specifications:

If you're in North America, you may enter the giveaway below and take your chances. The winner will be selected on July 30th.

As mentioned above, we're also giving away 26 digital copies of Mini Motorways for PC. In this case, though, there are no regional locks in place. Once again, the winners will be selected on July 30th. Good luck!

Have you ever been stuck in traffic and wished you could do something to fix it?
In Mini Motorways, the city’s traffic problems are in your hands.

From the makers of Mini Metro, Mini Motorways is a game about drawing the roads that drive a growing city. Build a road network, one road at a time, to create a bustling metropolis. Redesign your city to keep the traffic flowing, and carefully manage upgrades to meet the changing demands. How long can you keep the cities of the world moving?