The fast paced, top-down action game ‘Alienation’ for the PS4, has received a release date. 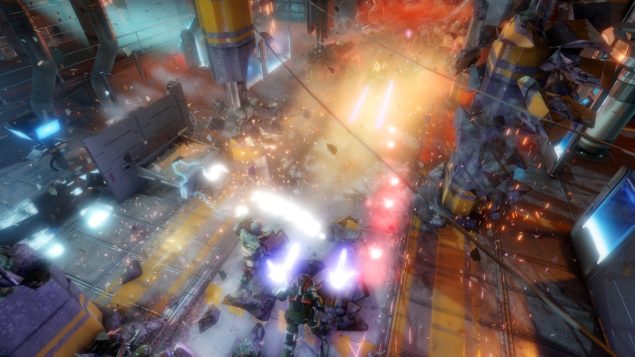 According to the European PS Stores, the game will be released on March 2, 2016. This applies to the French, German, Dutch and UK PS Stores.

Alienation is the spiritual successor to Dead Nation, and is being developed by Housemarque. The developer is known for titles such RESOGUN, Super Stardust: Delta, Dead Nation and Super Stardust HD. The game was announced last year as an PS4 exclusive, and according Housemargue the new physical based rendering on the PS4, allows them to create great looking worlds.

“The engine is entirely new and having put our toes in the water with RESOGUN we already know a lot about what works really well on the GPU especially, and how to blow things up spectacularly. With our all new physical based rendering we will create great looking worlds and blow them up even more spectacularly!”

Some of the game’s key features:

Being a spiritual successor, the game’s overhead view does look like that of Dead Nation. According to the developer though, the game’s different:

“All of the games are fun but I can only really speak in detail about Dead Nation and ALIENATION because I don’t work directly with the guys making Helldivers. In comparison to Dead Nation, the things I like most about ALIENATION are the fun and mayhem of 4 player multiplayer, the graphics, especially the destruction”

I guess we have to wait a few months before we actually witness the mayhem ourselves. For now, I suggest you check out this action-packed trailer of the game.