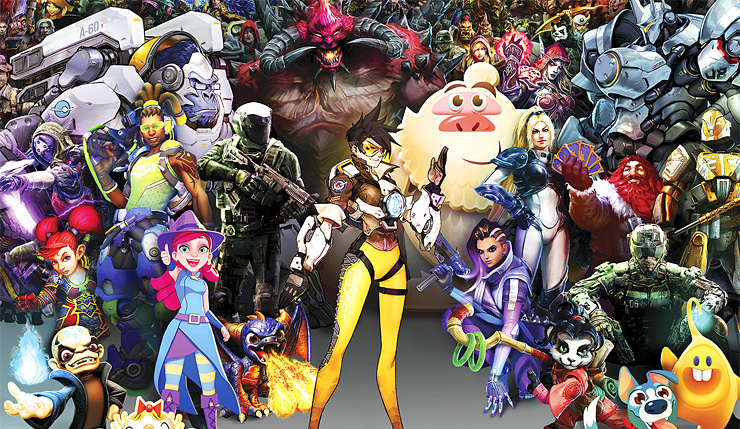 Activision Blizzard (NASDAQ:ATVI) have released their Q4 results for the fiscal year ending December 31, 2018, and frankly, what’s happening with the company can be a bit difficult to wrap your head around. At first blush, it would seem to be good news – Activision Blizzard had a record-setting 2018, bringing in $7.5 billion in revenue, up 6 percent year-on-year, and $1.81 billion in net income, way up from $273 million in 2017. Q4 revenue was $2.38 billion, above Acti-Blizz’s guidance of $2.24 billion, and earnings per share were $0.90, above guidance of $0.64.

Despite this, Activision Blizzard CEO Bobby Kotick proclaimed the company had performed “below potential,” and indeed, they did fall short of Wall Street expectations of around $3 billion in Q4 revenue and earnings per share of $1.28. Why analysts were expecting numbers so wildly above Acti-Blizz guidance is anybody’s guess. Despite the record year, Activision Blizzard announced they're refocusing their business and laying off 8 percent of their workforce (700 to 800 people). 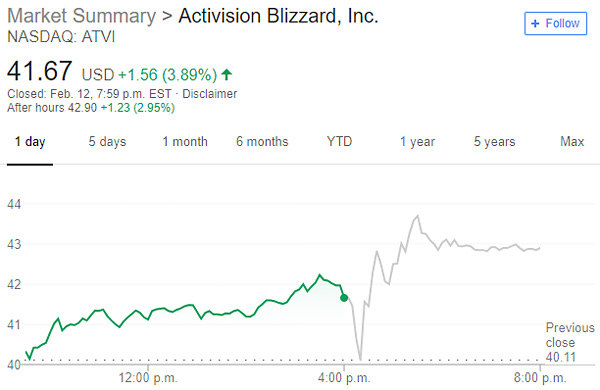 A Lean Year Ahead

A major reason for the refocusing, layoffs, and general downer tone of Activision Blizzard’s earning call is the company’s rather stark 2019 outlook. The company is expecting revenue of $6.03 billion, well down from 2018. EPS are expected to be $1.85, which is below Wall Street Expectations. Why the bleak guidance? It’s largely down to Acti-Blizz having very little in the works for 2019.

During the Q4 earnings call, Acti-Blizz leadership outright said no major new releases are coming from Blizzard and Activision currently only has two upcoming releases on the books (From Software’s Sekiro: Shadows Die Twice and Crash Team Racing Nitro-Fueled) and no Activision-published Destiny content is forthcoming following the split with Bungie. Of course, another Call of Duty game is coming in Q4, but the implication was that three games may be Activision’s entire core 2019 lineup. It was teased the new CoD will be “rooted in franchise history” and has generated a lot of excitement within the company, but Acti-Blizz predicts the game will sell fewer copies than Call of Duty: Black Ops 4. The company’s King mobile division won’t see any huge releases in 2019 either, as they just dropped Candy Crush Friends Saga in late 2018.

Blizzard Gets the Cold Shoulder

One thing made abundantly clear during the earnings call is that the Blizzard half of Activision Blizzard is the company's biggest source of concern. Again, no major new releases are coming from Blizzard in 2019 and in-game revenue has been on the decline. New Blizzard Entertainment president J. Allen Brack pledged to improve the flow and frequency of new content, and promised there are a number of PC, console, and mobile games in development. It’s expected Blizzard will be focusing their efforts on Overwatch, Hearthstone, and new Diablo projects. 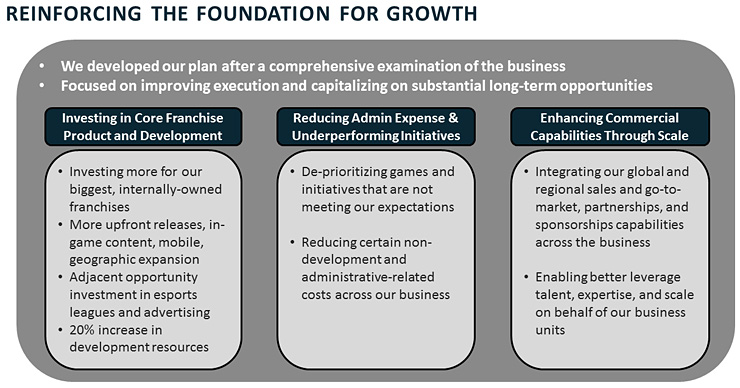 Going forward, Activision Blizzard has two seemingly contradictory goals – get new content out at a faster pace, while also doubling down on a small number of core franchises (Call of Duty, Candy Crush, Overwatch, Hearthstone, and Diablo). According to Acti-Blizz, today’s layoffs mostly hit support staff rather than developers, and the publisher plans to boost investment in their core teams (particularly Call of Duty, Overwatch, and Diablo) by 20 percent. Bobby Kotick tried his best to preemptively rebrand 2019 as a year of rebirth…

“With 2019 set to be a quieter year for upfront launches, now is the right time to implement this plan. Work is underway across the company as we speak. […] We have already started to increase developer resources on our biggest franchises, and we'll be aggressively hiring talent in the coming quarters. As we look forward to the coming years, we plan for all of our major franchises to be operating at scale and capitalizing on opportunities that include, robust ongoing live operations and regular content launches both large and small. […] In short, we are refocusing the entire company to return to the franchise focus that has fueled our long-term success and to better leverage the scale of our business for future growth.”

It all sounds fine, but one can’t help but wonder if Activision Blizzard is succumbing to needless panic. Again, 2018 was a record-setting year. Will offloading Bungie, cracking down on Blizzard, and narrowing their focus pay off for Acti-Blizz? Some investors seem to think so, as the company’s stock is up 2 to 3 percent in after hours trading. Personally, I’m not sure sticking strictly to what you know is a long-term winning strategy in the rapidly-changing gaming industry.