Activision Blizzard (NASDAQ:ATVI) have released their earnings for the quarter ending December 31, 2019, and it’s a bit of a good news/bad news situation. The mega publisher delivered $1.99 billion in net revenue in Q4, or $2.71 billion if you include deferred sales (the sale of digital content and in-game currency is deferred until the content is delivered or the currency spent under GAAP rules). The $1.99 billion in revenue was above the company’s outlook of $1.82 billion, but well down from the $2.38 billion made during the same quarter last year. Q4 net income was $525 million, down from $685 a year ago. Revenue for Activision Blizzard’s full 2019 fiscal year, which follows the regular calendar from January to the end of December, was $6.49 billion, down from $7.5 billion in 2018.

Earnings per share were $0.68 for Q4, short of the $1.15 predicted by financial analysts. Despite that, Q4 revenue being above expectations was apparently enough for investors, as Activision Blizzard stock is up around 2.5 percent in after-hours trading as of the posting of this article.

Call of Duty Nailing it, Blizzard Off Target

Unsurprisingly, the main reason Q4 revenue exceeded expectations was the release of Call of Duty: Modern Warfare, as the sales were up a “double-digit percentage” over the previous year’s game, Call of Duty: Black Ops 4. Modern Warfare is doing particularly well on PC, where sales are up 50 percent over Black Ops 4 on Blizzard’s Battle.net service. The large amount of deferred revenue on Acti-Blizz’s books (a whopping $722 million) also points to Modern Warfare in-game spending being very healthy. Activision Q4 revenue was up slightly ($15 million dollars) compared to the same quarter last year.

So, if Call of Duty is doing so well, why is business down overall year-one-year? Well, the majority of the blame lies with the Blizzard half of Activision Blizzard. As has been the case for a while, Blizzard’s business was down significantly year-on-year, with Q4 revenue dropping $85 million compared to last year. For the full year, Blizzard’s revenue was down a whopping $572 million compared to 2018. Blizzard didn’t have any major new releases in 2019, nor did it deliver any big expansions, like last year’s World of Warcraft: Battle for Azeroth. The release of World of Warcraft Classic did better than expected, but was not enough to carry the whole year for Blizzard.

Meanwhile, Acti-Blizz’s King mobile division was mostly flat, down $40 million year-on-year, and $55 million for the full year. King is essentially a one-game division, almost all its revenue comes from Candy Crush, so numbers will naturally slowly decline until a new entry in the series is released (Candy Crush Friends Saga was released in late 2018). 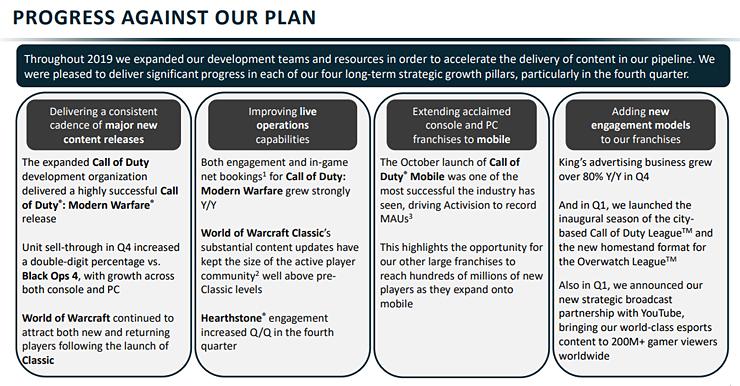 A Flurry of Questions Remain

The Activision side of the business should remain strong in 2020, as this year’s Call of Duty entry from Black Ops developer Treyarch is said to be testing well. In other promising news, Modern Warfare’s move away from a season pass to the Fortnite-inspired battle pass model has resulted in increased engagement and spending, so this year’s CoD ought to be particularly profitable as Activision continues to refine new modes of monetization. It’s also been confirmed that Activision will be publishing “several” remakes and reimaginings of classic franchises this year.

Unfortunately, the fate of Blizzard remains an open question. The recent release of Warcraft III: Reforged was met with massive fan backlash, as many felt the game didn’t deliver on Blizzard’s promises. Blizzard has announced a raft of new titles, including Overwatch 2 and Diablo IV, but it’s very much up in the air whether any of those projects will release in 2020. We might see Overwatch 2, which could be a big money maker, but given their recent missteps, its fair to wonder whether Blizzard can still deliver the industry-leading quality and innovation they were once known for.

Despite the issues facing Activision Blizzard, CEO Bobby Kotick was, of course, eager to put a positive spin on the company’s Q4 results…

Our recent Call of Duty success illustrates the scale of our growth potential, as we expanded the community to more players in more countries on more platforms than ever before. With our strong content pipeline across our franchises and momentum in mobile, esports, and advertising, we look forward to continuing to delight our players, fans and stakeholders in 2020 and beyond.

Can Activision Blizzard live on Call of Duty alone? It seems we’re going to get the answer to that question in 2020. For the full FY 2020 Acti-Blizz is predicting net income of $6.45 billion, with $1.64 billion of that coming in Q1. Hopefully we’ll get a clearer picture of what to expect as Acti-Blizz actually starts to reveal its 2020 schedule, but right now, hitting that number feels a long way from a sure thing.