Acer has just announced the XR341CK, a 34" AMD FreeSync capable gaming monitor with a curved 3440x1440 IPS display panel launching in July. If you think you're familiar with Acer's variable refresh rate curved gaming monitor that's probably because you are. As Acer has already announced the G-Sync variant of this monitor back in April and showcased it at Computex earlier this month. 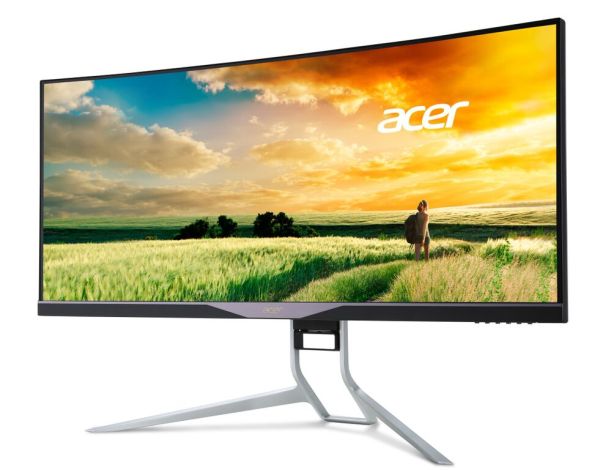 Adaptive-Sync capable monitors featuring Nvidia's G-Sync and AMD's FreeSync technologies solve three distinct issues in games. The first issue is tearing, tearing occurs whenever your game’s frame rate is mismatched to the refresh rate of your monitor. Which is the result of your graphics card producing a variable frame rate. No matter how fast your gaming system is it will always produce a variable frame rate. This is because some frames i.e. images are very complex and would take longer than usual to process, while other frames are more simple and thus are processed much more quickly.

If you want to become more familiar with FreeSync and G-Sync check out our in-depth analysis article of both technologies here.

Interestingly enough however the FreeSync variant will be coming out first with Acer promising on-shelve availability later next month while the G-Sync variant is set for release in September. Another interesting part of this announcement is the MSRP, which is a hefty $1,099 but still $200 less than the $1,299 asking price for G-Sync variant.
This is because as you're probably aware by now, unlike G-Sync, FreeSync doesn't require any proprietary hardware as it's enabled through the DisplayPort 1.2a Adaptive-Sync standard. G-Sync on the other hand requires the addition of the Nvidia G-Sync module to the monitor, which evidently adds a couple hundred dollars to the cost of the monitor.

The XR341CK features a curved 34" 21:9 QHD (3440x1440) IPS display panel with a 4ms response time and a 75Hz refresh rate, which is as fast as ultrawide IPS panels can get these days. The IPS panel enables incredible viewing angles of 178 degrees vertically and 172 degrees horizontally as well as 100% sRGP color reproduction accuracy. Users will be happy to know that the screen has a matte finish which Acer dubs "ComfyView" to substantially reduce light reflections.
UPDATE : The FreeSync range on this monitor is 30Hz-75Hz which is fantastic for a high resolution gaming monitor and the best we've seen so far on a QHD IPS panel.

Acer really focused on making the experience as comfortable and convenient as possible for the user. So they included their EyeProtect set of technologies to reduce eye strain. This includes the company's flicker-less technology which eliminates screen flicker as well as a blue light filter which will be greatly appreciated in nightly gaming sessions. Speaking of which the brightness can be turned down to 15% for those users who prefer gaming or watching content in slightly darker environments.

The monitor is launching later next month for $1,099 and is covered by a three year warranty.