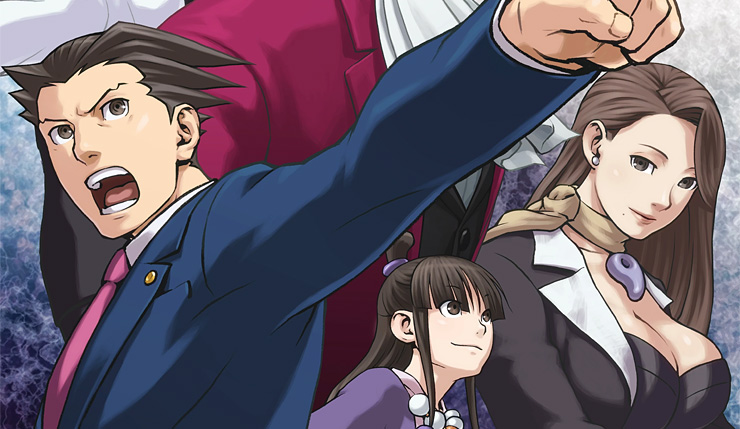 Whatever you’re doing, HOLD IT, because I have important news – Phoenix Wright: Ace Attorney Trilogy will be hitting Western shores in April! The collection came out in Japan recently, but Capcom had been keeping the rest of the world in suspense.

As the name implies, Ace Attorney Trilogy is a collection of the first three entries in Capcom’s wacky courtroom drama visual novel series. The games have been freshened up with new HD art and updated UI and controls. Aside from that, this is pretty much classic Ace Attorney as you remember it – no objections here! Check out a trailer for Ace Attorney Trilogy, below.

New to the series? Here are official synopses for the first three Ace Attorney games:

Phoenix Wright: Ace Attorney - Step into the bright blue suit and put on the shiny new attorney’s badge of Phoenix as he takes on his earliest trials, beginning with defending his childhood friend from being falsely accused of murder. Proving the innocence of the hapless Larry Butz is just the beginning, though, as Phoenix begins to uncover a mystery years in the making. With the help of Maya Fey, a spirit medium and Phoenix’s self-assigned assistant, join Phoenix as he goes head-to-head against brutal prosecutors like Miles Edgeworth and Manfred von Karma and learns what it means to be a lawyer.

Phoenix Wright: Justice for All - Phoenix takes on new cases as a rising star among attorneys, even as he comes under attack from the deadly whip of Franziska von Karma. With a prosecutor prodigy attempting to tear him down at every turn in court, Phoenix will need all the help he can get! Fortunately, Phoenix has the power of the new Psyche-Lock system on his side, allowing him to see into people’s hearts and unlock the truth he needs to win the day in court.

Phoenix Wright: Trials and Tribulations -  Puts Phoenix in the hot seat of the accused! Taking a leap back in time, step into the shoes of a different attorney: Mia Fey, older sister of Maya Fey and Phoenix’s future boss. Mia’s first case is to defend a young art student by the name of Phoenix Wright in a trial that will set the stage for the rest of the game’s events. Explore the twists and turns of the legal system as you fight to reveal the truth, and unravel a mystery that bridges the gap between the past and present for both Phoenix and the Fey family.

Phoenix Wright: Ace Attorney Trilogy gets its day in court on PC, Xbox One, PS4, and Nintendo Switch on April 9. The collection costs $30.