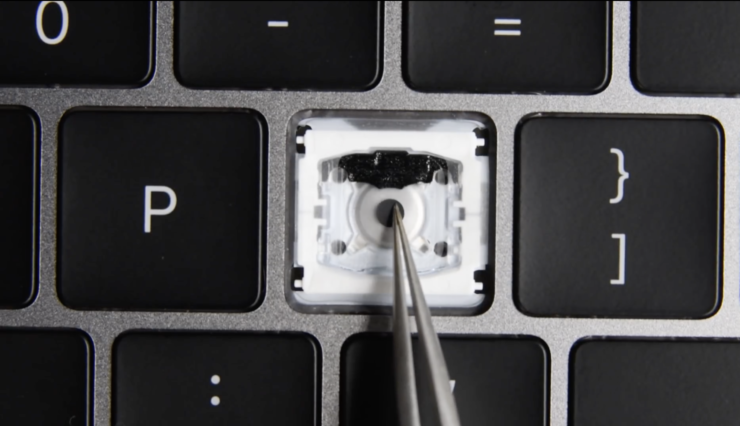 If you're remotely interested in the goings-on of the tech world, you'll know that Apple refreshed its MacBook Pro lineup this year. The company finally caught up to Intel by upgrading the notebook lineup's processors to quad-core (13" display), and hexa-core (15" display) processors. The 2018 MacBook refresh was also accompanied by some rather interesting changes.

First off, Apple claimed to have introduced its 'third-generation' butterfly keyboard on the notebooks. This one was designed to reduce noise via a special film introduced under the keycaps. However, everyone knows what the change is intended to reduce the keyboard's problem with dust and debris. Now, it looks like Apple's fix for the problem just might prove insufficient. Take a look below for more details.

We've got an interesting story today, one that directly relates to Apple's latest MacBook Pro refresh.  A Reddit user (The_Kommunist), reports that he bought a brand new 13" Apple MacBook Pro 2018 and intended to use it for college. However, the notebook's keyboard soon started to malfunction in a manner that's eerily similar to problems that have occurred with the 2017 and 2016 variants of the lineup.

To illustrate the problem, The_Kommunist provide users with a sample sentence which reads as "I'm typing thisf rom the keyboardr ight now." This clearly indicates a spacebar malfunction. He proceeded to take the faulty notebook to Apple's genius bar. The technician there confirmed that it's a hardware problem, but couldn't offer The_Kommunist a fix or a replacement since Apple's got no parts or programs for the 2018 MacBook Pro at the moment.

The interesting thing about this faulty MacBook Pro is that the keyboard started to malfunction within a few weeks of the purchase, which of course suggests that the problem just might not be related to dust and debris and could be a rare defective model. After all, the majority of problems with the 2016 and 2017 models started to surface after the dust and debris had had at least a month to accumulate.

Which leads us to conclude that this might not be a dust-related problem. Additionally, as the 2018 MacBook Pros start to permeate the market, the sample size for such problems will increase. After all, the first keyboard problems with Apple's 2016 MacBook Pro lineup's keyboards didn't surface till March 2017 if our memory serves us right. Thoughts? Let us know what you think in the comments section below and stay tuned. We'll keep you updated on the latest.