New Xbox Game Pass March 2020 Games Include Ori and the Will of the Wisps, NBA 2K20, Pikuniku and Train Sim World 2020 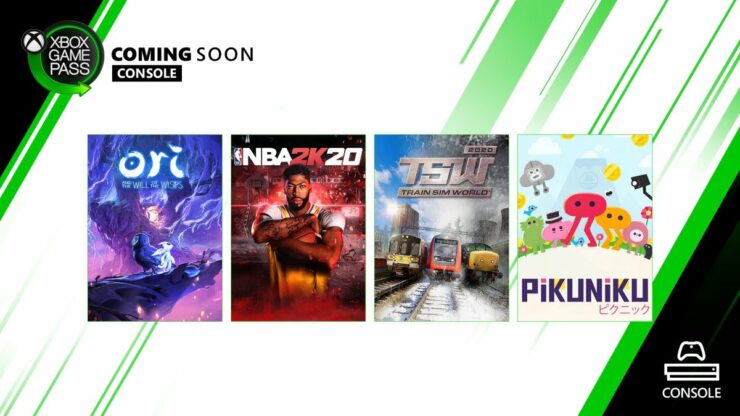 Microsoft has announced the next batch of Xbox Game Pass titles joining the game subscription service this month.

Arriving tomorrow are 2K’s NBA 2K20 and first-person simulator Train Sim World 2020. Becoming available next week on March 11 are Ori sequel ‘Ori and the Will of the Wisps’, which is also set for a global launch that day. One day later, users will be able to enjoy Sectordub’s puzzle-exploration game ‘Pikuniku’.

2K continues to redefine what’s possible in sports gaming with NBA 2K20, featuring best in class graphics and gameplay, groundbreaking game modes, and unparalleled player control and customization. Plus, with its immersive open-world Neighborhood, NBA 2K20 is a platform for gamers and ballers to come together and create what’s next in basketball culture.

Take to the rails with the brand-new Train Sim World 2020 Edition and find everything you need to master in this immersive simulator that uses real-world data to bring to life the performance, sounds and power of real trains. Featuring complete in-cab interactivity, accurate detail on locos, real-world routes and many hours of compelling gameplay.

A day one release available on Xbox Game Pass! Embark on an all-new adventure in a vast world filled with new friends and foes that come to life in stunning, hand-painted artwork. Ori is no stranger to peril, but when a fateful flight puts the owlet Ku in harm’s way, it will take more than bravery to bring a family back together. Set to a fully orchestrated original score, Ori and the Will of the Wisps continues Moon Studios’ tradition of tightly crafted platforming action and deeply emotional storytelling.

An absurdly wonderful puzzle-exploration game that takes place in a strange but playful world where not everything is as happy as it seems. Help peculiar characters overcome struggles, uncover a deep state conspiracy and start a fun little revolution in this delightful dystopian adventure.

Xbox Game Pass provides users with access to over 200 titles, including Xbox One, Xbox 360 and original Xbox games.