Xbox players can look forward to a variety of new features in the near future, as Microsoft is getting ready to release a new firmware update and improved web browser for their consoles. The new Microsoft Edge web browser is the most exciting thing on the horizon, as it’s built on the Chromium open-source software that also powers Google Chrome, and thus will be compatible with steaming services such as NVIDIA’s GeForce Now and Google Stadia. Of course, Xbox Game Pass Ultimate cloud gaming (aka xCloud) will also be an option once Microsoft launches browser support. This potentially means you’ll able to a) play PC games on your Xbox and b) play Xbox Series X games on an older Xbox once Microsoft upgrades their cloud gaming tech.

The new Xbox browser is currently in alpha testing, so it might be a little while before it rolls out to everybody. In the meantime, Microsoft is dropping an Xbox firmware update, next week! The update includes the ability to toggle Auto HDR and FPS Boost, new headset audio controls, and more. Get the full rundown, below. 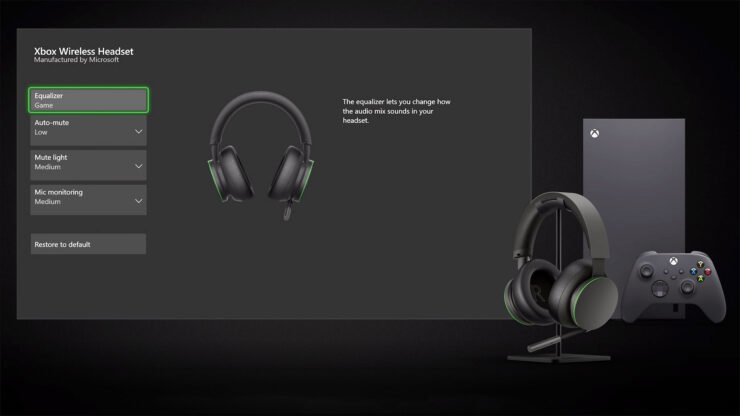 Tailor Your Xbox Wireless Headset Experience on Your Console or PC

Fine-tune the audio controls for a customized audio experience, including equalizer settings, bass boost, auto-mute sensitivity, mic monitoring, and brightness of the mic’s mute light. Best of all, the headset can stay updated with the latest features via wireless updates from your console, ensuring you’ll have a premium audio experience that continues to evolve.

In February, Team Xbox announced backward compatible games were getting even better with FPS Boost. Choice is incredibly important when it comes to choosing how you play your favorite games. So this March, we’re rolling out our new toggles for both FPS Boost and Auto HDR. In your game’s manage settings, you can choose your compatibility options and toggle on or off Auto HDR and FPS Boost. Once you restart the game, your selections will be applied – you can verify it by pressing the Xbox button and checking the indicators under the clock.

Achievements Are Coming Back to the Xbox app

Achievements are returning! We heard the fan feedback that our community wants achievements brought into in the Xbox app on mobile. This month we’re testing various achievement experiences in the app, starting with a limited set of players and then rolling out to everyone.

This first update will include a list of achievements in the app, an achievements details screen, and achievement unlocked notifications. We’ll also be releasing an additional update with popular features like leaderboards in the coming months.

A New Way to Manage Your Xbox Subscriptions

We’re bringing subscription management to the Xbox console to make it is easier for customers to see all their important plan information, including last charge, next charge, end date, and more. It also allows customers to update their credit card or other payment information, learn about all the different subscriptions available, and change plans. You’ll find all this in Settings under Account.

Managing Games Experience is Getting Better

We’ve improved the loading performance of the Manage screens in My games & apps. After purchasing a game in the Store with both Xbox One and Xbox Series X|S versions, the Manage screen makes it more clear what parts of the bundle are best for your console if you select Choose what to install rather than just Install all.

The next Xbox system update rolls out on March 16. That’s the same day the new Xbox Wireless Headset launches (get more details about that here).