The 'WoW Token' was announced back in march, and this would be a way for players to buy 30 days of game-time without paying for a subscription with real money. The WoW Token would work in a similar fashion of how EvE-online's Pilot's License Extension (PLEX) works, namely that Player A buys a Token/PLEX for real money from the game's website (in the case of the WoW Token, it will be purchasable from the in-game shop,) and puts it up on the in-game market. Player B then buys the Token/PLEX for in-game currency. The main difference with the WoW Token is that it will be sold via the in-game Auction House at a 'set' amount of gold, and the gold price will fluctuate based on supply/demand, as well as taking WoW's economy into consideration according to Blizzard. 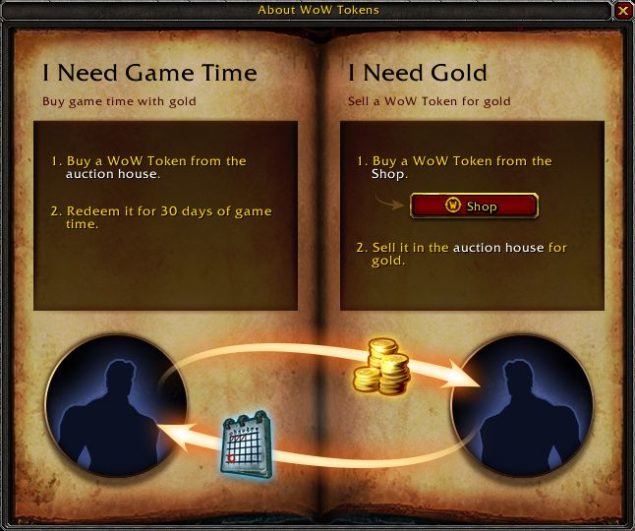 If you are one of the following two types of people who play World Of Warcraft (MMO's in general really,) you will probably be quite pleased with the 'WoW Token'. Type A having an enormous amount of spare time which you can spend on playing the game. Type B would be the player, who may have a family, work long days, come home eat and dinner with the family, and then perhaps squeeze in an hour or two of playing WoW before sleeping. Type A would most likely not have that much spare money to throw around on a subscription, or might want to spend that money on other things. Type B would most definitely have money to spare, but barely has any time to play.

Over at the World of Warcraft site Blizzard posted an announcement that the WoW Token would go live today on April 7th, at 10 a.m. PDT in the 'Americas' server region (North America, Latin America, Australia, and New Zealand).

This can work out pretty great for any players that have loads of Gold stockpiled, or just plays regularly and can earn enough gold for a token plus gold to spend on other stuff. As a personal example, 'back in the day' when I played EvE-Online, I spent roughly 4 or 5 of my last years before quitting, never paying a single $ for my subscription. The last 3 years I even ran two accounts. And I took me roughly a week on average to earn enough in-game currency to afford a 30 day PLEX for Both of my accounts.

I'll leave you with a quote from a character from one of Blizzard's other games "Hell It's about time".