The new site for The Witcher 3: Wild Hunt features a vast description in all aspects of the massive RPG including its story, enemies and allies, the child of prophecy, equipment, mutations and others. 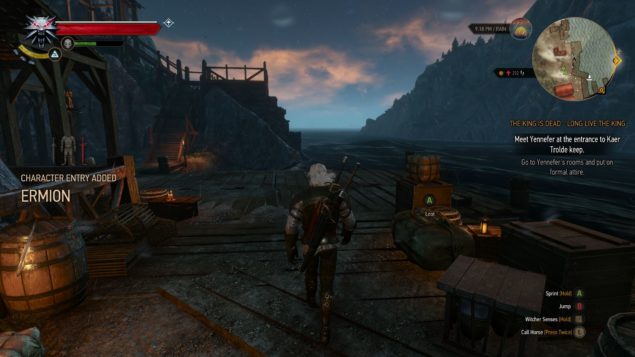 It also offers a new set of gorgeous screenshots which can be viewed in the gallery below.

Witchers’ mutations endow them with incredible speed, reflexes and strength and enhance their senses, allowing them to see more, hear more, perceive more… With these augmented senses, Geralt can track a wyvern on the dark of night, follow the scent of weeks-old perfume and parry crossbow bolts whistling towards his back. Witcher’s Signs, another set of skills in Geralt’s repertoire, are powerful combat spells that take various forms, from protective barriers, through torrents of flame, to magic snares and more. Lastly there is Geralt’s wolf medallion, the symbol of his witcher school. This pendant hums to alert him of nearby magic and monsters -- invaluable help to a monster hunter. Most of these skills can be developed for additional effects and increased potency, making Geralt an even more fearsome fighter.

As a monster hunter, Geralt has an extensive arsenal of weapons at his disposal. From swords and axes to crossbows and unique gear available only from the finest crafters, the tools of Geralt’s trade allow him to deal death in many ways. The wide variety of armor available to Geralt absorbs both physical and magical attacks, thereby delaying the witcher’s own demise, while potent blade oils and bombs give him an extra edge in combat. Thanks to his training in alchemy, Geralt can gather rare herbs along his path and use them to brew special, highly toxic concoctions. His potions would kill any ordinary human, but Geralt’s mutations let him metabolize them. They grant him abilities that include seeing in the dark, moving faster, striking with added force… and much, much more.

Geralt is a bounty hunter, an apex predator in a world gone wrong. In a monster-infested world he is a necessary counter-balance. His main task is to eliminate creatures that pose a threat to society. Hunting monsters is his business -- and there’s always plenty of work. Monsters come in all shapes and sizes, and while some are members of broader species, others are one -of-a-kind. To face the latter, extremely powerful or clever creatures, you’ll embark on special quests to learn about their fighting style and behavior. The monster threat is real and strong. Along your path you’ll encounter entire areas overrun by beasts, the humans and nonhumans who once lived there gone. Should you decide to risk death, your job will be to exterminate every last pest and render these places safe once more. Succeed and you’ll see folk return, more than eager to craft and sell you rare, enhanced gear.

The enemy of your enemy is your friend - you can’t afford to care if they’re virtuous to the core, or ruthless or otherwise vile. Geralt is a professional, and if it helps get the job done, he’ll accept the aid of scoundrels and brutes, as well as sorceresses and jolly dwarves. In his line of work, he can also become a target. Those with different agendas send their spies, assassins, murderers and thugs after him. Since the forces of order generally don’t like witchers, you won’t be able to count on guards or soldiers coming to your aid. You’re on your own -- and in for a tough fight.