The Witcher 3: Wild Hunt is a game that no longer needs an introduction, but just for goodluck, i'll do it anyways. The Witcher 3: Wild Hunt is as you may have guessed from the name, the third installment in The Witcher series and after the huge successes of it's predecessors, this has turned out to be one of the most anticipated games through which many relate and is a release that is a household name for any real gamer. So if you don't know about it, I suggest you reanalyse your gaming room and get some real games. Kidding, but everyone has their own choice and this is a good choice for hardcore RPG gamers.

Moving forward, the last news i covered about the game was about the rating "M" allotted to it by the certification Entertainment Software Rating Board, in short the ESRB. The rating basis was the abusive in-game language bundled with violence and gore and strong sexual content in the game including nudity. The rating was explained thoroughly by the rating board and you can read more about the reason for the games "M" rating here. 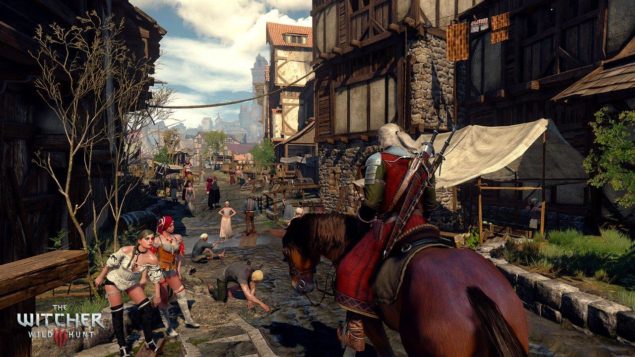 Getting down to the actual core of this article, we have two new 1080p Witcher 3 screenshots to show for courtesy the Official Facebook Game account.  The first one shows us another glimpse of the game's main character Geralt and Vesemir by his side. The first screenshot looks a bit paleish to me but that might just be the background effect of the environment the characters are in but otherwise, the detail is really amazing to witness where the characters are vivid and clear.

The second screenshot for me is a work of art really hard to find in games these days. With such picturesque beauty, no wonder the game has such anticipation behind it. Anyways, looking at the second screenshot, its hard not to fall in love with the game. The first screenshot is a bit blur in the background but if you enlarge the second one, it's really quite clear with the nice use of pixels. It makes for something much more than a game until you see those realistic "bodies" hanging at which point you'll probably be happy to know its just a game. You can view the screenshots yourself below:

By the looks of it, The Witcher 3 is aiming to be a class act of the gaming cinema just like The Order: 1886 where even the least of scores admired the picturisation(animation) of the video game. We'll keep you updated with the game and until the you have two awesome screenshots to add to your 'Witcher' collection.