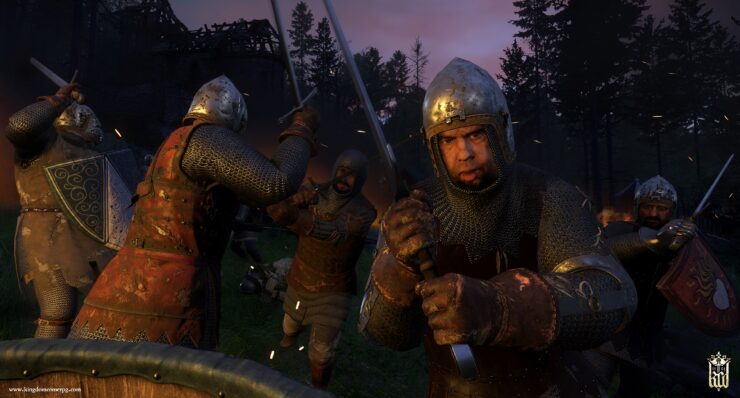 If you skim through a list of roleplaying games released in the past twenty years or so, you'll quickly notice that the vast majority uses fantasy, sci-fi, post-apocalyptic settings or any variation on those themes.

That's for a very good reason - it is much easier to craft a universe with fantastical enemies such as monsters/beasts, not to mention create interesting classes and eye-catching skills, when using those settings. Czech development team Warhorse Studios, whose founder Daniel Vávra previously directed Mafia and its sequel while at 2K Czech, decided to tackle this and several more issues with Kingdom Come Deliverance, an open world RPG set in 1403's Czech Republic (then called the Kingdom of Bohemia).

You heard correctly - the game is set in Medieval Europe and there won't be any dragons to find, only dungeons. Players are put into the lowly shoes of Henry, the son of a blacksmith, who won't really be saving the world or anything like that. It should be a nice change of pace from the usual hero's journey that we've got in most RPGs.

As an indie studio, Warhorse turned to Kickstarter in order to get funded. Their campaign was more than successful with £1,106,371 in pledges, though admittedly the release date prediction was really off the mark (by more than two years). Still, all this polish could prove to be crucial once Kingdom Come Deliverance lands on February 13th for PC, PlayStation 4 and Xbox One.

We've recently published a hands-on preview, but we're now doubling down our coverage by interviewing PR Manager Tobias Stolz-Zwilling to provide you with extra tidbits of info.

A while ago, when talking about map size you mentioned that the first act would have a map of roughly 16 square kilometers. However, your current FAQ on Steam states that you have effectively merged the first and second act (while the third will be reserved for a sequel), thus making the game much longer than originally planned. Does that mean the map size will be bigger?

The 16 square kilometers are the extended map size. We originally planned for 9 square kilometers but that grew along with the game. We added a new village and now have somewhere around a thousand points of interest scattered over the world of Kingdom Come: Deliverance.

A concern I've seen is that the game looked 'boring' to some viewers commenting on gameplay videos released so far. Is that something you expect to go with the high degree of historical accuracy, or perhaps you anticipate that these fans will have a different impression while actually playing the game?

Kingdom Come: Deliverance surely is a very unique experience that ignores many established RPG training wheels. No GPS system, no minimap, no question marks or arrows over NPCs. It’s a game that takes its time, it’s slower than most other RPGs, the combat is less action oriented but tactics and preparations are key. It will be a challenging experience, but KCD will give you an RPG experience in the truest form. Quests can be solved in multiple ways and your decisions matter – you determine how Henry fulfills his quests. It just comes down to a matter of personal preference.

Will there be different difficulty settings to choose from in Kingdom Come Deliverance?

No. Kingdom Come: Deliverance will only have its default setting. You can regulate it yourself however by leveling your character and making sure to “train” before going into the next challenge. The RPG system will help you, but you will always need some playing skills in combat for example to be victorious. The same guy from the beginning of the game can also kill you in the end if you don’t prepare properly. However, we are still thinking of some kind of “hardcore-mode” in future. But we will have to put our heads together. No matter what it will be a challenging experience that will require some brainwork from the players, as not all quest solutions jump out in your face.

One issue with more than a few first-person games on console is that they have a narrow field of view (FOV) which cannot be modified in any way, thus making some gamers sick or uncomfortable when playing. Do you plan to include a FOV slider on consoles or at least a decent FOV setting to begin with?

Yes, we have a slider on both PC and consoles to change the default settings.

Is there any update on the availability and extent of mod support?

Our team had great experiences with modding on past projects. We also would like to address the modding community but are still not sure how and when exactly.

Would you consider using crowdfunding for funding when it comes to future projects after this experience?

Could you share your recommended PC spec for targeting 4K and 60FPS after your final optimization pass? Will there be support for multiGPU (SLI/CrossFire) systems at launch?

To be honest, we didn’t really test it yet and to use the SLI technology we would need a driver profile from Nvidia.

Will Kingdom Come Deliverance feature support for High Dynamic Range (HDR) displays and if so, on which platforms?

No, the CryEngine 3.8.6 does not support this technology.

Kingdom Come Deliverance is listed on Microsoft's official Xbox One X enhanced page. Can you share with us your take as a developer on the "most powerful console ever made" as well as the technical specifications of this version (native resolution, target frame rate, graphics settings etc.)

Currently, it surely is the most powerful console. In general, it allows us to use 1440p resolution, top quality Global Illumination, more and better shadows, better lighting and LOD distances compared to the regular Xbox One.

Will the game also feature dedicated enhancements for Sony's PlayStation 4 Pro console and if so, how do they compare with the Xbox One X?

The PS4 Pro is a powerful console as well and we are trying to utilize the power of each platform – within the limits of the CryEngine. We heavily modified the engine to our needs and are very happy with the results. But compared to the Xbox One X, the PlayStation 4 Pro runs at 1080p resolution and slightly worse Global Illumination/particle effects simulation. Then again – we are pushing all platforms to their limits. Both the base PlayStation 4 and Xbox One will run at 900p.