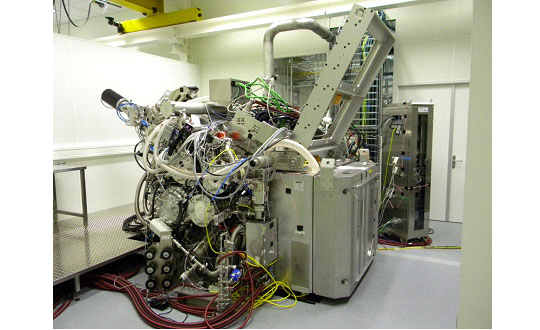 A little company in Japan by the name of Ushio (TYO:6925) had not made a splash with its announcement in July that they had perfected and received the first acceptance (that had been delivered to an inspection equipment manufacturer and performed well for inspection tool development) for their method to test EUV chip designs with ultra-precise lighting (SN LDP) based on "evaporating the tin on the electrode with laster trigger and exciting the evaporated tin with the discharge-produced plasma". This technique according to the company's statement is "higher intensity" and "space-saving" compared to the alternatives - LPP/SN and DPP. This is very good news for the semiconductor fabrication industry.

EUV refers to the process that is soon to enter mainstream adoption (once all developmental impediments are cleared) as the means whereby the next generation of semiconductor chips will be fabricated - at nodes lower than 7nm. EUV has been in the development pipeline for decades and last month Samsung () announced it would use the technique to manufacture the SOC powering its latest and greatest Galaxy Note 10 - the Exynos 9825.

Apart from Samsung, Intel (NASDAQ:INTC) and TSMC (TPE:2330) are known to have plans to utilize EUV to go to 7nm and beyond. However, they will be obtaining lithography machines fit for the purpose of ASML Holding NV and not specialist suppliers like Ushio (who are contributing essential pre-requisites and complementary technologies to enable EUV mass-production).

Ushio has perfected the light source to test patterned EUV masks ( Squares made out of glass that is used as stencils for designing chips). These stencils have an extremely low tolerance production meaning even tiny microscopic defects will introduce deformities into the pattern rendering the product useless for its intended market, this is where Ushio has managed to change the game by producing a viable light source for testing the templates for defects.

According to a company release on its website in July "Ushio has been conducting research and development of the high-brightness EUV light source and has improved the performance and reliability by providing research and evaluation service using Ushio's high-brightness laser-assisted discharge-produced plasma EUP light source in the EUV exposure and analysis facility of the Netherlands organization for Applied Scientific Research (TNO) from March 2017". This refers to a prior agreement between the two entities whereby TNO in the Netherlands has sought and applied Ushio's technology in conducting EUV research. Ushio says "major manufacturers" are verifying EUV lithography for practical use and Ushio's light source for mask (the EUV stencil or template) inspection is key to "establish a EUV lithography mass-production technologies.

According to the CEO, the EUV technology developed will turn profitable in the next fiscal. This development positions Ushio as one of the handfuls of companies in the sector enabling the successful deployment of EUV. "The infrastructure is now mostly ready,” CEO Koji Naito was quoted as saying in an interview. He further explained “Testing equipment was one of the things holding back EUV. With that piece in place, production efficiency and yields can go up". It is also important to note that the company does not plan on entering the mass market in various other segments but will basically be the sole supplier for its niche.  Koji Naito had the following to say on the question of Ushio's target market, "We don’t chase the mass market, even though there is potentially a ton of money to be made in home lighting or automotive,”. “Instead, we want to focus on niche areas and do things that others can’t.”

Ushio supplies 80% of the market for lithography lamps used in the manufacturing of LCD displays and over 95% of the market for excimer lamps used to clean silicon wafers is supplied by the company. The company has filled a vacuum in the industry and successfully capitalized on it. Founded in 1963 its sales have tripled over the past 25 years. Ushio is only one of the companies in the Greater Tokyo area specializing in niche high technology outside of its mass application in high volume products. Few know that specialist suppliers of the description of Ushio exist but these companies are part of Japan's dominance in semiconductor manufacturing and are playing a part in the Japan-South Korea trade war.

Samsung Eager To Catchup With TSMC; Wants To Manufacture Apple’s A13 By Investing In Packaging And EUV