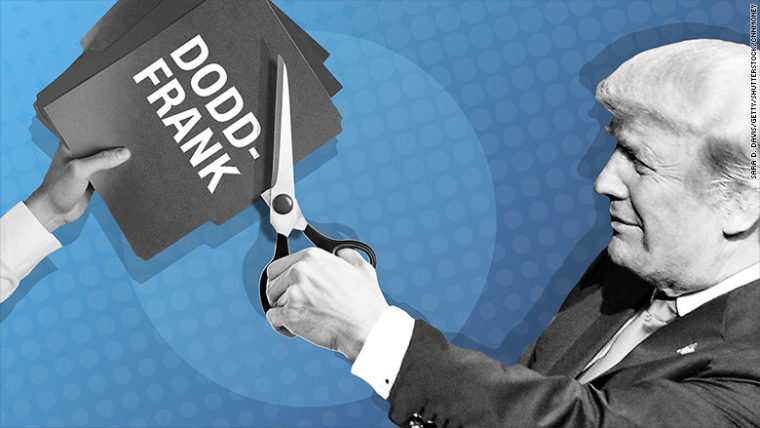 US senators voted yesterday 67 to 31 with bipartisan support, to rollback regulations that were put in place less than a decade ago after the great financial collapse in 2008. It seems when big banking comes knocking it really doesn't matter if you are blue or red. The bill strips away restrictions enacted by the Dodd-Frank Act of 2010 which was written and passed to, among other things, prevent major banks from making the same mistakes to allow another financial collapse. We touched on a piece of the regulation, the Volcker Rule recently.

The White House press secretary Sarah Huckabee Sanders commended the bill. “The bill provides much-needed relief from the Dodd-Frank Act for thousands of community banks and credit unions and will spur lending and economic growth without creating risks to the financial system,” she said. The obvious message that is being broadcast from both the White House and Congress is that this bill is designed to give relief to these so called community banks and credit unions.

Before I get to which banks are affected let's examine a bit of what is actually going to change. The Dodd–Frank Wall Street Reform and Consumer Protection Act, passed in 2010 was a direct result of some massive US financial institutions failing, causing a domino effect of systematic failure throughout the US economy. The causes of this are complex but it was universally agreed that one major reason that caused this was that banks were no longer simply holding money.. they were actively trading with it, and trading more and more advanced financial instruments. Banks were buying other banks bundled debts which in turn were being traded bought and sold again and again. Not necessarily a problem in and of itself but the issues associated with sub-prime lending in the run up to the crisis are clear and don't need to be rehashed here.

After the crash in 2008 US lawmakers stepped in with the Dodd-Frank act designed to reel in the larger banks from this risky type of behavior. Up til now, banks with more than $50 billion in assets were considered “too big to fail” and were subject to the toughest tier of regulations, including a yearly stress test to prove they could survive another period of economic turmoil. While financial regulations are nuanced and complex, the major gist of the the bill marks a 500% increase, to $250 billion, in the amount of assets at which banks are deemed "too big too fail". So any bank with under $250 billion in assets is now under this limit. The change would ease regulations and oversight on for example, some small community banks and credit unions such as BB&T Corp. (NYSE:BBT) , SunTrust Banks (NYSE:STI), Fifth Third Bancorp (NASDAQ:FITB) and American Express (NYSE:AXP).

Apparently American Express and Suntrust are "community banks". Fairly easy to see that's a blatant misrepresentation. On to the credit unions.. well just how many are freed up by this bill? Well first understand that credit unions in the US have an average asset worth of about $250 million. That's right.. a quarter of a billion dollars. How many credit unions were subject to Dodd-Frank before the bill that was passed yesterday? A grand total of..... one. The Navy Federal Credit union is the ONLY credit union in the country that has assets over $50 billion. That means that even before this new bill, that every single other of America's 6,000+ credit unions were already not subject to Dodd Frank regulations. Here are the top 10 credit unions in the US:

Senator Warren may have put it best when she stated "“Washington is poised to make the same mistake it has made many times before, deregulating giant banks while the economy is cruising, only to set the stage for another financial crisis,".

Gutting Rules on Banking or a Lemon Socialist Country?

"Privatize profits and socialize losses" seems to be the creed of big banks and the United States government. The strategy is to allow banks to perform risky investments that give sky high returns and Wall Street bonuses enabling mansions and Ferrari's to be purchased.. and when they inevitably fail throw up their hands, claim they are too big to fail, and pump public funds back into them. We basically are playing "capitalists" when banks are making money, then we play "socialists" by bailing them out on the back end.

This feels like part a 2 pronged attack on Dodd Frank, yesterday's bill aimed at the raising of thresholds is one and helps medium banks, the rewrite of Volcker is the other and helps the very largest of banks. Now the US House of Representatives will be asked to vote on this bill next, though its worth noting we expect it to pass as the House has been calling for even more aggressive rollbacks of financial regulation already