Over the past month we've covered the financial results of Activision Blizzard, Square Enix and Paradox Interactive. One thing they all have in common is a good level of success, revealing strong quarterly or yearly performances. Continuing this trend are Ubisoft (EPA:UBI) who have revealed a non-IFRS operating income of €236.7 million, a record high for the company. This is a marked 40.7% increase on the previous year, coming from increased sales revenue and relatively stable expenses. Sales have increased 4.7% year on year, rising to €1.46 Billion, with a record high non-IFRS profit margin of 16.3%.

The Breakdown of Sales

While sales certainly didn't increase to the same level of income, what has worked for Ubisoft is the diversification of these sales. For the first time, digital now accounts for 50% of sales revenue, rising from 32% in 2015-16. This has risen on the back of a 131.2% increase in player recurring investment to €304m. This measure includes downloadable content (DLC), season passes, subscriptions and advertising. A further boost has been a sharp 26.7% increase in monthly active users (MAUs).

One other major contributing factor to the sales has been the sizable back catalogue of the company. 44%, or €649.2m of the year's sales figures were from older titles. This is a marked increase from last year, which saw only 26% of sales revenue come from their back catalogue. 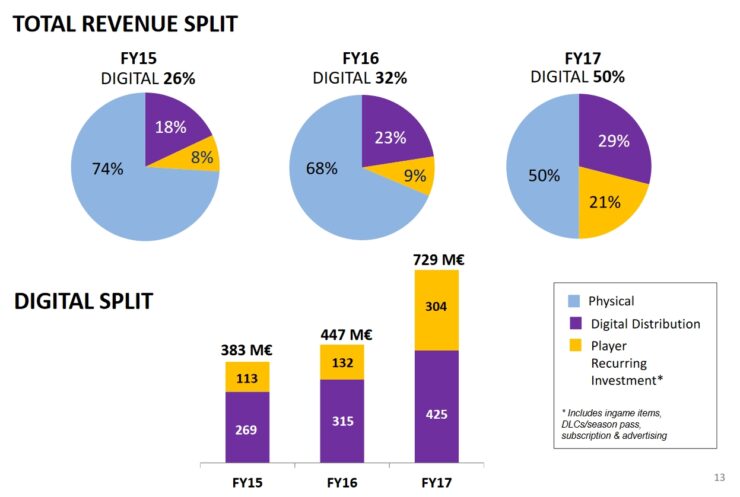 What may come as a slight surprise is the division of sales by platform. Where other companies are seeing increased growth from mobile, Ubisoft don't appear to be. Sales on the PlayStation 4 platform are at 41%, down 1% year on year. The Xbox One gained 1%, rising to 27%. The older generation of platforms (PlayStation 3, Xbox 360, etc) saw the largest decline, falling 5% to just 7%. This should be expected, although the gains were unevenly divided with the PC gaining 4%, rising to 18%. Other platforms, which includes mobile, only gained 1%, rising to 7%. However, this has a large potential to change in the near future. The acquisition of mobile developer Ketchapp in September 2016 offers Ubisoft a platform to build a strong base to benefit from the growing mobile gaming sector.

CEO Yves Guillemot stated "The execution of our strategic plan fully paid off in 2016-17, with further very strong growth for the digital segment – which now accounts for 50% of total sales – and an ever-more recurring profile." Mr Guillemot then went on to speak of future plans by saying "Over the last three fiscal years, Ubisoft has – with remarkable success – created numerous new brands and re booted Rainbow Six and Ghost Recon. These successes have strengthened our visibility for the coming two fiscal years, with a line-up of releases principally comprised of established franchises. In 2017-18 we will see the exciting returns of Assassin’s Creed, Far Cry, The Crew and South Park. In 2018-19 we intend to pursue our digital transformation and consolidate our new business model, which is much more recurring and more profitable and is now significantly less exposed to new releases. This revision of our assumptions gives greater visibility for meeting our targets."

Ubisoft have started on the route to a targeted increase of presence in the mobile sector due to the purchase of Ketchapp. In addition, Ubisoft have partnered with Tencent (HKG:0700) for an upcoming Might & Magic game targeted at the Chinese market. The strong year with the high plans for the near future could lead to good things by Ubisoft, though the same strong results increases how compelling a target they are in the long-running saga with Vivendi (EPA:VIV).