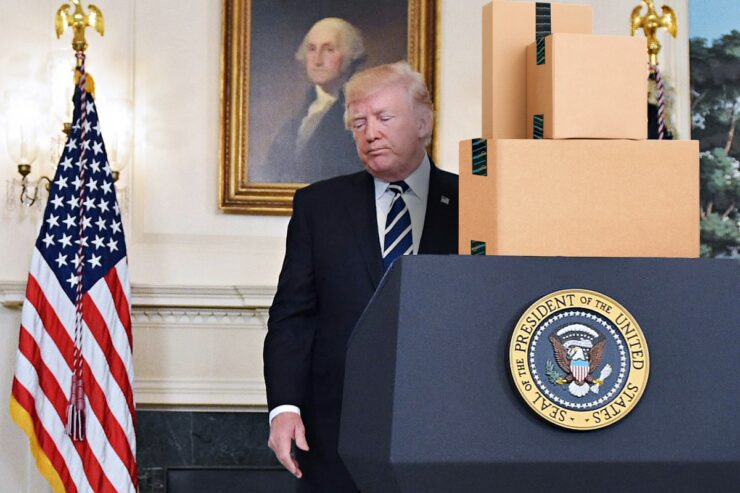 Earlier today a report via Axios outlined President's Trumps obsession with e-commerce giant Amazon (NASDAQ:AMZN) which played a major role in a +4% drop on the price of their stock that saw a corresponding $30 billion dollar drop in their market cap.

The President seems to view the company in a very negative light and investors are obviously afraid of that fact. The report goes on to list some of the President's qualms with Amazon including: its affect on small American brick and mortar retailers, the issue of tax policy and how states can collect sales tax from sales done via their in-house marketplace, the effect on the Postal Service, and even concerns about CEO Jeff Bezos' ownership of The Washington Post.

Amazon closes the day down over 4%

Perhaps The Donald got wind of Rihanna and one of the Kardashian's effect on Snapchat's stock value (NASDAQ:SNAP) and said, "hold my beer". The two celebrities together contributed to a $2 billion hit to Snap's market cap, while today's mere article on Trump's sentiments caused a rippling sell-off amounting to $31 billion at the closing bell.

The President has previously commented on Amazon/Jeff Bezos via Twitter so this really isn't anything new:

The #AmazonWashingtonPost, sometimes referred to as the guardian of Amazon not paying internet taxes (which they should) is FAKE NEWS!

Amazon is doing great damage to tax paying retailers. Towns, cities and states throughout the U.S. are being hurt - many jobs being lost!

So it comes as no surprise that some further detail has come to light expressing Trump's disdain for the tech giant. This comes at an interesting time however as Amazon is relatively scandal free yet Mark Zuckerberg's Facebook is under extreme scrutiny over user data which the President has remained silent on. The Axios report DOES indeed mention that VP Mike Pence expressed concerns over Facebook's (NASDAQ:FB) control and usage of private data.

Its worth noting that tech stocks in general had a less than stellar day so just how much of Amazon's loss can be directly attributed to this report is hard to say. Strange times we live in where the leader of the free world can utter a few words about a company and wipe tens of billions of stock holder value off the market.