The Next Generation Of Cellular Networking – 5G

Ever since the introduction of the internet, the web and other computer related devices, man has been yearning for more. More speed, more bandwidth with the least latency is the goal for now. When 2G mobile telephone technology was introduced back in 1992, it allowed users to use various data services and utilize the 'Short message service'. Now it seems even with the 4th generation at our disposal, we deem it less. Samsung has been fiddling with 5G and have known to have developed the first 5G system. A speed of 1.06 Gigabit/s was achieved by Samsung in May 2013. In the future, companies such as NTT DoCoMo are eager to launch networks with 10 Gbit/s speed. 5G is slated to have speeds in the multitude of 10 Gigabit/s. 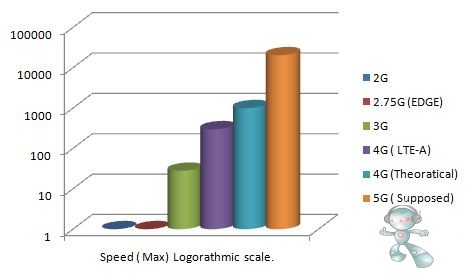 5G is touted to be at least ten times faster than 4G but the sad thing here is that we will have to wait till 2020 or so. Ironically some countries are stuck with plain old 2G!. What do you think, do you need a 10 Gbps connection on your smartphone?